Next generation farming: How drones are changing the face of British agriculture | Environment | All topics from climate change to conservation | DW | 19.07.2019

Next generation farming: How drones are changing the face of British agriculture

Agricultural drones could help farmers take care of their crops and even cut down on pesticides. While there's certainly some buzz, laws and price tags may hinder the industry from taking off. 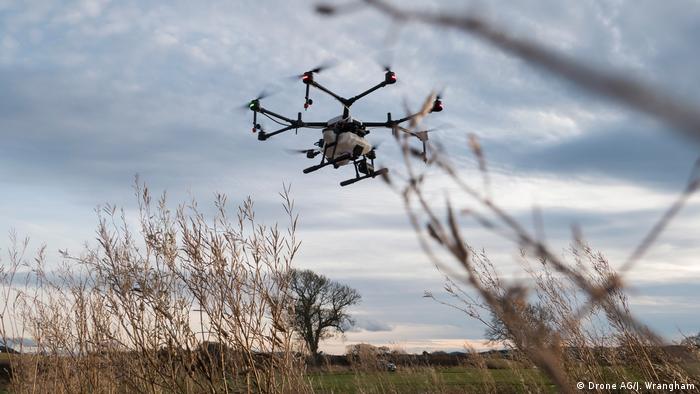 When Colin Rayner got a drone for his farm, he was initially just pleased that it could help him catch trespassers.

As his 700 acres of land is spread out over several different sites in the south east of England, there was little he could do about them cutting holes in his fences and driving motorbikes on his fields.

Yet now he says he "can use the drone to photograph the motorcyclists, get headshots and pass [the] info onto the police."

However, the drone's primary purpose is for analyzing his crops. Rayner's neighbor William Abbots flies the unmanned aerial vehicle over the farmer's fields taking photos from the sky.

These are then sent to his computer or phone where an app called Drone Deploy  shows the health of his crops. High contrast, colorized pictures highlight problem areas. 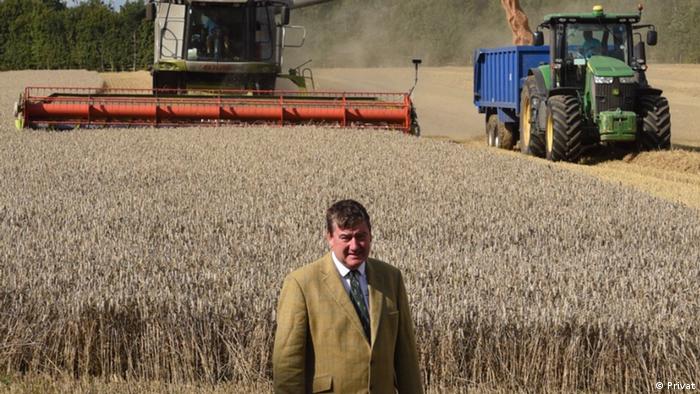 Rather than having to walk the fields to identify diseases, pests, fungus and weeds, Rayner can pick them out using his drone images and then target the areas he feels need to be sprayed.

"We identify diseases and pests and fungus and weeds in the crop at an earlier stage," Rayner told DW, adding that he could therefore use fewer chemicals, because he was seeing the problem a couple of weeks earlier.

Using less pesticide, insecticide and herbicide is good for Rayner's wallet, but is also better for the soil and for pollinators and other insects.

According to a 2018 report by the Government's Department for Environment, Food and Rural Affairs (DEFRA), farming is now the "most significant source of water pollution" in the UK – and pesticides are a large part of the problem.

'Precision farming' in the UK

But drones can do more than take photos and provide data. In Asia and some countries in Europe, they tend to the fields.

Agricultural spaying drones are equipped with a tank and spraying system. They can then be set on a predetermined GPS-defined route and buzz over a field, dropping doses of pesticides, herbicides and fungicides as they go.

Wrangham says, "drone sprayers don't touch the ground so there will be less soil compaction."

This is when heavy machinery like tractors roll over the soil, pressing it down and damaging it. Farmers can fix this with plowing, but Wrangham says "this can be harmful to the soil over a long period of time."

Another supposed benefit is they let farmers grow where they haven't been able to before.

Last year alone the Chinese company DJI sold 20,000 spraying drones to domestic farmers, and about 2,000 in Japan and South Korea. Meanwhile, they're also being used in countries like Switzerland and El Salvador. 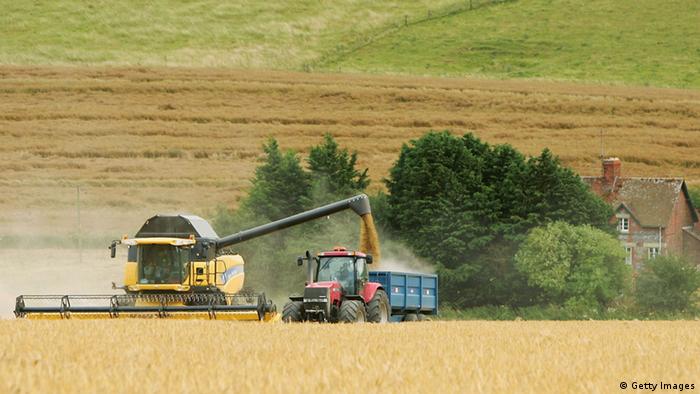 One place they're not allowed for commercial use, however, is the UK.  Trials are permitted but an average farmer like Colin Rayner can't deploy them.

Once he has identified his problem areas, he or one of his employees uses a tractor to spray chemicals over the affected part of the field.

Were he able to use a drone, Wrangham's company contends it would save him hours of labor.

In an article on their website, Drone AG claim that spraying drones means that "a job that previously took many hours now only takes a few minutes."

Yet Wrangham believes drones will be more than just a time saver. They'll let farmers grow the food we need while slashing the amount of pesticides.

He says, "we need pesticides, in order to produce the amounts of food we need now, let alone where the world population is going… but we don't need to put them everywhere."

Indeed, the UN predicts the number of people on the planet  will rise to 10 billion by 2050.

As the moment, British drone laws are getting stricter. In large part after reported sightings of a drone in the  London-Gatwick airspace last December led to the cancellation of hundreds of flights.

The government has since responded by making it illegal to fly a drone above 400 feet, or within 5 kilometers of an airport.

This will affect farmers who live near airports. Colin Rayner, for one, can't use unmanned aerial vehicles on some parts of his farm as a few of his fields are too close to Heathrow.

The farm of the future

However, Tim Breitmeyer, president of the Country Land and Business Association (CLA), a group that represents farmers and other rural businesses, says the regulations are "necessary."

"We've already seen irresponsible use of them at Gatwick to cause chaos. It doesn't take very much to take down a low flying helicopter," he told DW.

According to the UK Airprox Board there were well over 100 near misses between unmanned aerial vehicles (UAVs) and aircraft in the United Kingdom last year — making 2018 the worst year on record.

Meanwhile, after inviting a couple of students to experiment with an UAV on his land not far from London, Breitmeyer says he's seen first-hand how drones can terrify animals.

"One of the things we've found is they're not good with animals, they spook horses because of the noise," Breitmeyer said. He added, "there's a public safety point of view there… as the drone operator won't necessarily see the person riding through the countryside."

There are wider ethical concerns about agricultural drones too. David Rose, a Geography lecturer at the University of East Anglia, says they could impinge on people's privacy.

"If your house happens to be on the edge of a field, and the farm is regularly putting a drone up capturing live images of your back garden, or your home — you might be thinking well actually I don't want to be under surveillance all the time," Rose said.

He doesn't see a need to make farming more efficient.

"Often, we get obsessed with [food] production," he said, "when in fact we could just do other things, like waste less, distribute food more equally, solve inequality, which means we wouldn't have to produce more food to feed a growing population."

Where next for farming drones in the UK?

Some like Jack Wrangham and Colin Rayner believe these flying farmhands are the future of British farming.

So too do the professional services firm, PricewaterhouseCoopers, who estimate that commercial drones will add £42 billion (48 billion euros; $53 billion) to the British GDP by 2030 — and agriculture will be one of the main beneficiaries.

But they're also expensive. Breitmeyer says the fact that an unmanned aerial vehicle and the software system can cost thousands of pounds prevents them from becoming more popular.

"There's an innate distrust in whether the technology is worth it at the moment," he said. Getting a drone and a license can costs thousands of pounds, so "for many farmers… there is a cost bearer at the moment."

Although he could afford one, he's not convinced that technology is good enough.

So, whether it's down to laws, attitudes or costs — it's clear that in Britain at least, farming drones haven't quite managed to take off.

From butterflies to bees, nearly half of all insect species are threatened with extinction "over the next few decades." Scientists have warned of the devastating impact it could have on the future of humankind. (11.02.2019)