An EU court has ruled that lawmakers must have access to scientific studies used by European authorities to declare the pesticide free of cancer-causing risks. The glyphosate controversy has exposed rifts in the EU. An EU court ruled Thursday that European lawmakers must be given access to scientific studies examining the safety of glyphosate, a chemical commonly used in pesticides whose possibly carcinogenic nature has raised global controversy.

The ruling by the EU's General Court could reinvigorate debate over glyphosate in the EU, which has seen an EU-wide petition to ban the product rejected by the bloc's executive arm and raised questions of transparency. 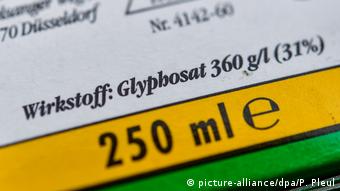 Glyphosate is used in agriculture to control crop-damaging pests

Views on the case

Sven Giegold, a German member of the European Parliament for the Green party, told DW ahead of the ruling that the core of the case was transparency in food and health safety: "This case is about getting access to the … original studies, which were used by the European Food and Safety Agency in order to approve glyphosate."

"We asked for the data, it was refused, and so we went to court to get it," he added.

Why is glyphosate controversial?

Glyphosate is found in many pesticides used widely in industrial agriculture, as well as in domestic and urban settings. The most well-known example is RoundUp, a weedkiller made by chemical giant Monsanto, which was recently acquired by German pharma giant Bayer.

Some global health bodies have warned glyphosate can cause cancer and other health issues, while environmentalists argue it destroys crucial biodiversity. However, others have argued the cancer links are tenuous and maintain the product is safe to use.

What was the EU case?

Four EU lawmakers — Finland's Heidi Hautala, Hungary's Benedek Javor, France's Michele Rivasi and Belgium's Bart Staes — filed the case in May 2017 against the European Food Safety Authority (EFSA), which had used toxicological and carcinogenic studies to determine the safety of glyphosate, finding that "glyphosate is unlikely to pose a carcinogenic hazard to humans."

While the European Commission used the findings to classify the chemical as safe, lawmakers were denied access to the same studies, based on the argument that it could harm the commercial interests of companies that presented the studies.

In October 2017 the European Parliament approved a nonbinding resolution to ban the chemical's use by 2022. However, the law-making executive branch of the EU, the Commission, voted a few months later to extend the glyphosate license for another five years, though the vote revealed divisions in the bloc.

France voted against the 2017 extension, and President Emmanuel Macron has pushed for phasing out glyphosate in the coming years. Austria, Belgium, Croatia, Cyprus, Greece, Italy Luxembourg and Malta also voted against the extension.

Germany supported the extension, though roughly one year later the country introduced stricter national regulations for pesticides. The Czech Republic has also announced they will limit its use.

With the release of the data, other scientists can also view the procedures and attempt to replicate and verify the conclusions.

However, MP Giegold said the case was "more about the past than the future," because the approval process for pesticide has already been changed in EU law, resulting in increased public transparency.

The European Union is deciding about the future of glyphosate — a controversial herbicide that may be linked with cancer. DW offers an overview on the most important points of the debate. (27.11.2017)

Hautala: 'We got more than we expected'