Study shows glyphosate may be killing honeybees | Environment | All topics from climate change to conservation | DW | 24.09.2018 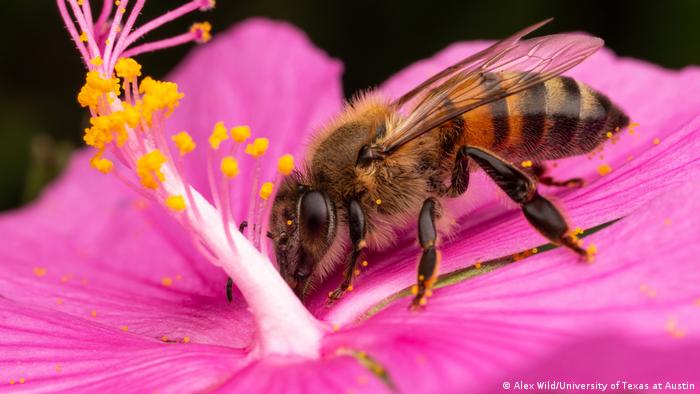 Brand-new research from the University of Texas at Austin shows that glyphosate is hazardous for bees.

For this study, scientists exposed honeybees to glyphosate at levels known to occur in crop fields, yards and roadsides. The researchers painted the bees' backs with colored dots so they could be tracked and later recaptured. Three days later, they observed that the honeybees exposed to glyphosate lost some of the beneficial bacteria in their guts and were more susceptible to infection and death from harmful bacteria.

Their conclusion is that by altering a bee's gut microbiome — the ecosystem of bacteria living in the bee's digestive tract, including those that protect it from harmful bacteria — glyphosate compromises its ability to fight infection.

And that, scientists believe, is evidence that glyphosate might be contributing to the decline of honeybees and native bees around the world. 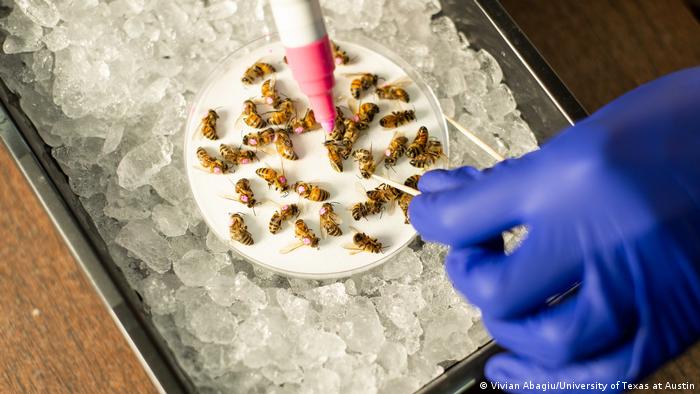 Glyphosate, the active ingredient in Monsanto's herbicide Roundup, has been used by farmers around the world for more than four decades. With 700,000 tons per year produced, glyphosate is the most used pesticide in the world.

In Germany alone, every year about 5,500 tons of glyphosate are sprayed on private gardens, in city parks and along train tracks. But the lion's share of the pesticide is used in agriculture. In fact, glyphosate is used on approximately 40 percent of Germany's arable lands.

It's a chemical substance that represses certain amino acids and thereby halts plant growth. In agriculture, it's often used right before or after seeding in order to rid the arable land of weeds. Sometimes, the chemical agent is also used before harvesting, as the chemical dehydration process known as siccation lets fruit ripen quicker, which makes harvesting so much easier that few in the agricultural business can imagine life without it. 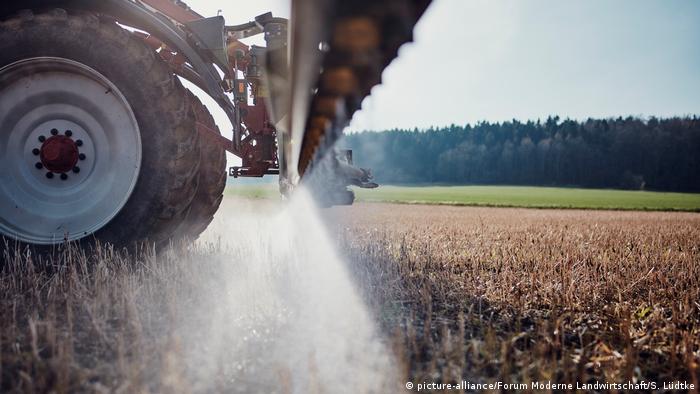 But glyphosate has also been making headlines for its potential health hazards. The herbicide, which was developed by the US agricultural corporation Monsanto in the 1950, has been linked to Parkinson's and Alzheimer's diseases and more worryingly, there are currently hundreds of court cases in state and federal courts arguing that the widely used weed killer causes cancer.

While the World Health Organization says there is evidence that glyphosate is likely to be carcinogenic, other research, including that of European health authorities, is inconclusive.

Politicians have also been ambiguous. While the European Parliament has called for the herbicide to be banned by 2022, the EU Commission recommended its license should be renewed for 5 years. 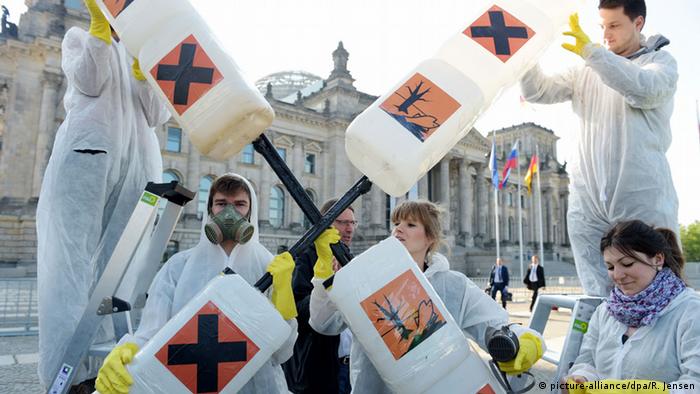 Threat to biodiversity and animals

Less debated than whether or not glyphosate causes cancer is the herbicide's impact on the environment.

The German environment ministry is concerned by the fact that the all-around pesticide kills off plants in an indiscriminate manner, including plants that are essential for the survival of many animals. This could result in monotonous farm land, lack of wild herbs and landscapes without the hum of insects and the chirping of birds, environmentalists warn.

The European Chemicals Agency ECHA recently deemed glyphosate non-cancerous, but it kept the classification as a "substance causing serious eye damage and being toxic to aquatic life with long-lasting effects."

Bee decline could get worse

The news that the weed killer could be as harmful to bees is important considering that bee numbers are already in sharp decline. Domestic and wild bee populations have plummeted in many parts of the world, a process which is commonly referred to as colony collapse disorder. This has happened in the United States, where beekeepers found their hives decimated after millions of bees mysteriously disappeared, and in China, where they now hand pollinate their apple and pear trees because they don't have enough bees left to do it. 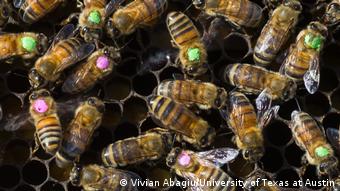 For their study, scientists exposed honey bees to glyphosate and painted the bees' backs with colored dots so they could be tracked and later recaptured

A combination of factors are to blame for this decline, including parasites like the varroa mite, the use of pesticides and farming methods that kill the flowering plants bees feed on, as well as insecticides like neonicotinoids that harm the bees directly.

The new study now directly links the use of glyphosate with the decline in bees. Researchers found that bees with impaired gut microbiomes after exposure to glyphosate were far more likely to die when later exposed to Serratia marcescens, an opportunistic pathogen that infects bees around the world, compared with bees with healthy guts.

Based on their results, the researchers recommend that farmers, landscapers and homeowners avoid spraying glyphosate-based herbicides on flowering plants that bees are likely to visit.

Why we need bees to survive

Bees are among the main pollinators in the world and without bees life as we know it would cease to exist. 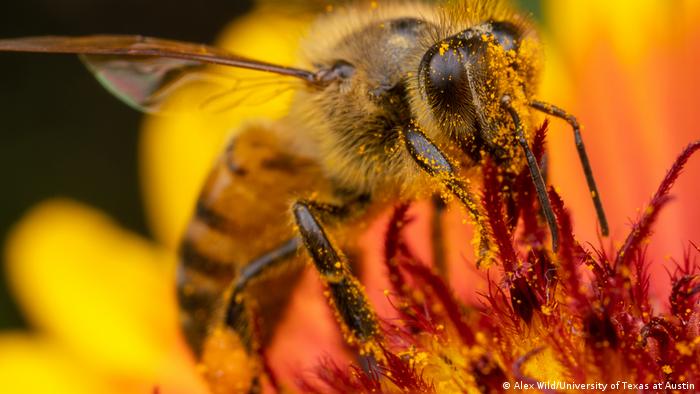 Bees are among the main pollinators and without them, much of the food we eat would disappear

"Life on earth essentially will collapse without insects. They are at the heart of every kind of ecological process you can think of," Dave Goulson, a biologist and insect expert at the University of Sussex in the UK, told DW.

"Roughly three-quarters of the crops we grow in the world benefit from being pollinated by insects, which gives us about a third of the food that we eat. And it's the most nutritious, tasty fruits and vegetables we like to eat, and also things like coffee and chocolate we wouldn't have without insects, so diets would be much poorer and it would be very difficult to feed everybody without those pollinators."

In times when the number of crops we grow in the world that need pollinating has drastically increased, we desperately need more pollinators, not less.

And it's not just the pollination process we need bees for. They do a whole bunch of other things as well. They're intimately involved in lots of nutrient cycles, helping to break down leaves, dead trees and dead bodies of animals. They help to recycle those nutrients and make them available again.

"So if it weren't for insects, cowpats and dead bodies would build up in the landscape, which sounds pretty unpleasant," Goulson said. "We should be really concerned over the decline in bees. People should be jumping up and down and concerned over this, because these insects do so much. Really, ecosystems will collapse, and we cannot survive without insects. People may not like insects, often they don't, but they ought to appreciate that insects do an awful lot for us."

The ruling paves the way for many more cases against agrochemical giant Monsanto. Glyphosate, the active ingredient in Roundup, is at the center of a debate over the weed killer's impact on humans and the environment. (11.08.2018)

Living Planet: How safe is our food?