The European Parliament has called for glyphosate to be banned by 2022 amid fears the weed killer causes cancer. The move puts pressure on the EU Commission which recommended its license should be renewed for 10 years. 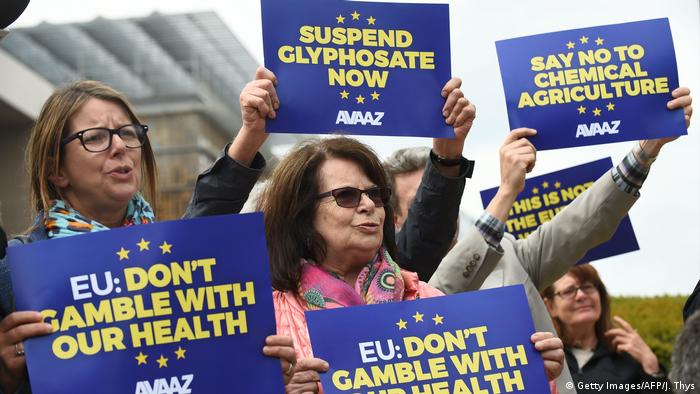 As time is running out to renew the EU's license for glyphosate, lawmakers in the European Parliament approved a resolution on Tuesday that calls for the herbicide to be banned in the bloc altogether.

A majority of MEPs backed the proposal which recommends a "phase out" of the substance, first banning household use and then agricultural use.

By December 2022, glyphosate-based herbicides should be fully banned, lawmakers said in a statement.

On Monday, activists who oppose glyphosate use gave the EU a petition signed by over 1.3 million people backing an outright ban of the herbicide in Europe. Greenpeace and other activists say that the weed killer causes cancer.

In its statement, the European Parliament also noted that the recent scandal over claims that US agricultural giant Monsanto influenced research into its herbicide's safety has raised serious concerns. Glyphosate is the main ingredient in Monsanto's RoundUp weed killer.

The revelations "shed doubt on the credibility of some studies used in the EU evaluation on glyphosate safety," the statement said.

Although the resolution is not binding, it ups the pressure on the bloc's executive arm, the European Commission, which had previously recommended the herbicide's license be renewed for 10 years.

Shortly after the European Parliament approved the glyphosate ban resolution, the Commission walked back its recommendation.

The Commission is now seeking a five to seven year renewal for the glyphosate license, a spokesman said on Tuesday.

Experts from the EU's 28 member states are due to discuss the Commission's recommendation on Wednesday, but it is unclear whether they will vote on the measure or where each of the individual member states land on glyphosate use.

If there is no majority for the license renewal by the end of the year, glyphosate will be banned in the EU in 2018.

Those who oppose glyphosate use cite a 2015 study from the World Health Organization's (WHO) International Agency for Research on Cancer which found that it was "probably carcinogenic."

That result conflicted with findings from the European Food Safety Authority and the European Chemicals Agency, which said the substance was not likely to cause cancer in humans. Those findings were also in line with a 2016 review of glyphosate conducted by WHO experts and the UN Food and Agriculture Organization.