EU member states have voted to extend the license for controversial weed killer glyphosate. Germany's approval was crucial in the vote, but it could derail coalition talks between Merkel's conservative bloc and the SPD. 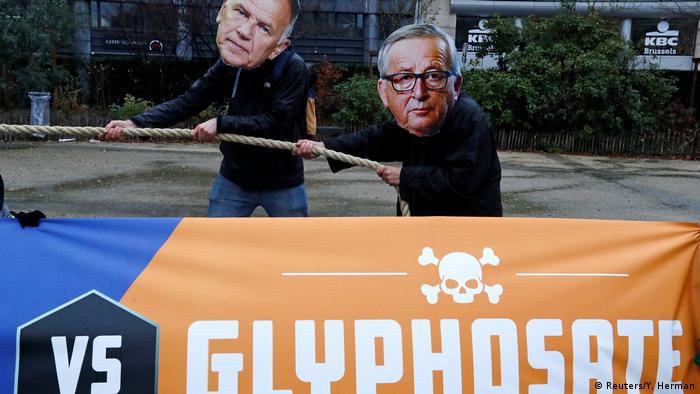 Anti-glyphosate protesters in Brussels on Monday

An appeal committee of the EU's executive arm has granted an extension of the license for the weed killer after a motion earlier this month failed to produce the necessary votes.

Of the 28 member states, 18 voted in favor of the extension, nine voted against and one abstained. At least 16 votes were required to renew glyphosate's license. The weed killer is best known for its use in Monsanto-brand weed killer Roundup.

- Farming without glyphosate - how would that work?

The European Commission, which tabled the extension, said in a statement: "The proposal voted today enjoys the broadest possible support by the Member States while ensuring a high level of protection of human health and the environment in line with EU legislation. The Commission will not adopt the decision before the current authorization expires on 15 December..."

The controversial weed killer has been under the spotlight in the EU since June 2016, when its previous 15-year license expired and an 18-month extension was granted. The current license expires on December 15.

Originally, the Commission had intended to allow glyphosate to be used for another 10 years before reducing it to five years, which, however, again failed to secure the necessary votes.

According to the commission, 14 countries voted in favor on November 9, nine against and five abstained.

According to EU circles, Germany was among the countries that voted in favor of the extension, after having abstained in the previous round of voting. Berlin reportedly changed its mind after receiving assurances from the Commission on animal welfare and private use of the weed killer.

However, Hendricks responded furiously to Germany's decision, accusing Agricultural Minister Christian Schmidt, from the Bavarian Christian Social Union (CSU), of going behind her back. The SPD environment minister said that she and Schmidt had discussed on Monday morning "that I continue to be against an extension to the use of glyphosate, even other specific conditions." Both ministers had agreed that Germany's representative in Brussels, a delegate from Schmidt's Federal Ministry for Agriculture, would once again abstain from voting, said Hendricks.

Schmidt defended the decision to vote in favor of the extension in an interview with the German Rheinische Post daily. "With today's approval to extend the use of glyphosate for a further five years, we were able to obtain important regulatory conditions for the first time," the CSU lawmaker said, adding that the Commission would have approved the measure without Germany's backing anyway but "without these conditions."

The dispute could threaten to derail German Chancellor Angela Merkel's plans to form a "grand coalition" between her conservative bloc and the SPD. Merkel spent Sunday meeting with several other leaders in her center-right Christian Democratic (CDU) party to formulate plans for a new alliance with Germany's center-left.

SPD leader Martin Schulz, however, has appeared more reserved about the possibility, having initially rejected the idea of another "grand coalition" immediately after his party's poor showing in September elections. Even the slightest discord or disagreement in the talks could see the SPD pull out and Germany face another general election.

The chancellor is under pressure to form a new government after talks with the Greens and Free Democrats broke down last week. Mathematically, only an alliance with the SPD would give her a majority in the Bundestag.

Glyphosate – often known by its Monsanto brand name Roundup - is the world's most widely used herbicide. In Germany alone, farmers treat about 40 percent of arable land with it.

Critics say it's carcinogenic and negatively affects biodiversity, but many farmers say there is no viable, cost-effective alternative and that banning it will push food prices up.

Since Monsanto's patent on glyphosate, which it had held since 1974, expired in 2000, it has become cheaper and its use has become more widespread.