Glyphosate: The key points in an endless debate | Environment | All topics from climate change to conservation | DW | 27.11.2017

The European Union is deciding about the future of glyphosate — a controversial herbicide that may be linked with cancer. DW offers an overview on the most important points of the debate. 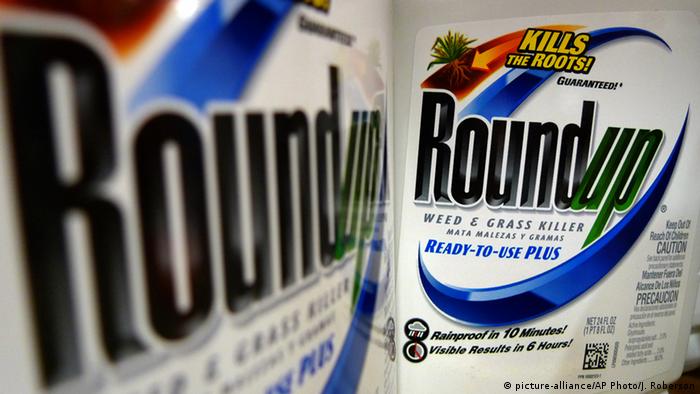 Despite warnings over potential risks to human health and the environment, farmers around the world are dependent on chemical giant Monsanto's herbicide Roundup. Active ingredient: glyphosate.

In June 2016, European Union member states delayed a final decision on renewal for the weed killer, instead extending the license for 18 months. In October and November 2017, the European Commission again pushed back a vote on the issue.

While many EU member countries support continued use of glyphosate, countries like France have already announced plans to oppose the license renewal. In previous meetings, large member states such as Germany have been undecided.

The debate over weed killer glyphosate has been raging for years.

In 2015, the World Health Organization's International Agency for Research on Cancer (IARC) classified the herbicide as "probably carcinogenic." Yet in 2016, the European Food Safety Authority (EFSA) said glyphosate is "unlikely" to cause cancer.

Glyphosate is the world's most widely-used herbicide. In Germany alone, farmers treat about 40 percent of arable land with it. Glyphosate undeniably increases the efficiency of farming — and traces of it have been detected in many foods, from ice cream to beer.

However, critics argue that risks are too high. A Danish farmer in Europe alleged that glyphosate caused his piglets to be born with deformities; in countries like Argentina, experts have blamed cancer, miscarriage and deformation in humans on glyphosate.

Environmentalists also point out potential harmful effects of glyphosate on biodiversity and ecosystems.

Some compare the powerful agrochemical lobby behind glyphosate with that of tobacco. In the same vein, they argue that Monsanto has manipulated scientific studies upon which regulatory bodies base their decisions.

In any case, the controversy is far from over.

Over the past years, DW has been closely following the decision-making process on the future of glyphosate, and presented all the different positions on the debate - including how a future without glyphosate might look like.

The EU should not renew the license that allows the sale of RoundUp weed killer in the bloc, US cancer victims argue. They say exposure to the key ingredient, glyphosate, made them and their loved ones sick. (05.10.2017)