A US judge has denied Monsanto a new trial after finding the agrochemical company liable for its cancer-causing product. The verdict dragged down shares in Monsanto's German parent, Bayer. 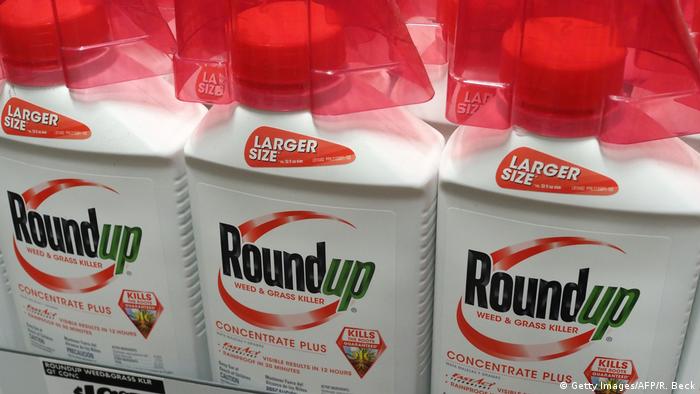 A judge in San Francisco on Monday upheld a jury's verdict that found Monsanto liable for a groundkeeper's cancer. However, the judge slashed damages from $289 million (€252 million) to $78 million.

The trial was the first of its kind to find Monsanto liable for not warning users of the potential carcinogenic properties of glyphosate found in its Roundup herbicide.

The verdict dragged down shares in Monsanto's German parent, Bayer. The stock plunged more than 10 percent on the Frankfurt Stock Exchange on Tuesday.

The German chemicals and pharmaceuticals giant's Monsanto takeover bid was finalized earlier this year; the €58.8 billion deal was the biggest ever foreign takeover by a German firm. The deal aimed to create an agrichemical giant offering specialized seeds, compatible pesticides and data services for farmers, with Bayer best known for pharmaceuticals and Monsanto for agricultural products.

While critics are quick to describe glyphosate — the main chemical substance in Roundup — as carcinogenic, research is far from definitive on the question. Here's what international bodies, environmental authorities and researchers have to say:

The European Union's European Food Safety Authority said in 2015: "EU peer review experts, with only one exception, concluded that glyphosate is unlikely to pose a carcinogenic hazard to humans and the evidence does not support classification with regard to its carcinogenic potential."

The World Health Organization's International Agency for Cancer Research in 2015 classified glyphosate as "probably carcinogenic to humans." At the same time, it said that, "For the herbicide glyphosate, there was limited evidence of carcinogenicity in humans for non-Hodgkin lymphoma. The evidence in humans is from studies of exposures, mostly agricultural, in the USA, Canada and Sweden published since 2001."

The US Environmental Protection Agency in 1985 labeled glyphosate a "possible human carcinogen," but that classification was rescinded in 1991 by an internal committee, saying there wasn't enough evidence to claim that it was carcinogenic. It was consequently labeled a chemical with "evidence of non-carcinogenicity for humans." A new review process launched in 2015 said data "at this time do no (sic) support a carcinogenic process for glyphosate."

Monsanto has argued that its product does not a pose a threat to humans. In a 2016 report on glyphosate, the agrochemical company said the agent "exhibits low toxicity to humans and non-plant wildlife over both short- and long-term exposures."

Johnson has until December 7 to accept the reduced amount in damages. If he does not wish to accept the amount, he can demand a new trial.

German chemicals and pharmaceuticals giant Bayer has reported lower earnings for its second quarter. The drop came as the firm presented its first financial statement after the mammoth takeover of Monsanto. (05.09.2018)