Cocaine production is up 20 percent in one of the world's largest producing countries. Colombia's president says drones rather than the previously favored aircraft will spray coca plants to reverse the trend. 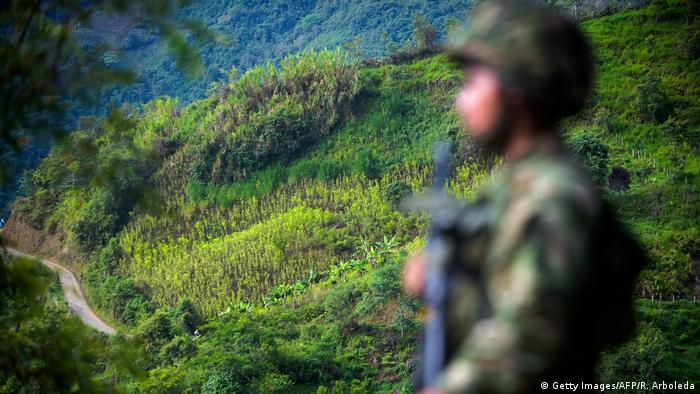 Colombia will start spraying coca crops with herbicide from aerial drones in an effort to stem a recent uptick in cocaine production, President Juan Manuel Santos has announced.

The South American country banned the practice of using aircraft to spray coca plants with the herbicide glyphosate in 2015 after a constitutional court ruling raised concerns about its potential damage to people's health and the local environment.

Read more: US and Colombia aim to halve cocaine production in five years

But Santos said on Tuesday that drones flying at a lower altitude made the practice less risky. "It's similar to what we are already doing, with eradicators going with a tank on their shoulders spraying on the ground," he said.

The drones, he added, would also spray a glyphosate concentration of less than 50 percent compared to that used previously.

Cocaine productions on a high

The United States said on Monday that cocaine production had increased in Colombia by nearly 20 percent in 2017, with areas used to cultivate coca, the crop used to produce cocaine, up by more than 10 percent.

Colombia is one of the world's largest producers of cocaine and most of it ends up in the US. Washington gave the country some $10 billion (€8.6 billion) from 2000 to 2015 to help it fight the myriad gangs and paramilitary groups involved in the production and trafficking of the drug.

"It's a struggle that is not Colombia's alone," Santos said. "It's the responsibility of the whole world."