Climate change and a growing population are prompting Germany's capital, Berlin, to rethink how it supplies water. An exceptionally hot and dry 2018 has made the matter even more urgent. 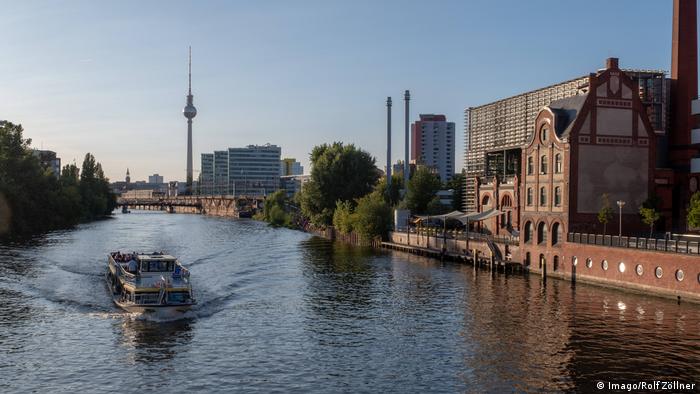 Jens Feddern picks up a long-stemmed glass of sparkling liquid, looks at it and tastes. The water from this part of Berlin has a distinct character. Crisp and fresh. In other districts, it has an earthier quality, he explains with the expertise of a sommelier.

And he should know. The engineer has been working with the city's water utility Berliner Wasserbetriebe (BWB) since 1987 and is now director of the supply division.

That supply comes from underground. The water Feddern has just been sipping was pumped from about 40 meters (131 feet) down from a well in Wuhlheide, one of the city's nine waterworks.

The BWB supplies some 3.7 million Berliners with around 550,000 cubic meters (145 million gallons, the equivalent of 220 Olympic-sized swimming pools) of water daily. On hot summer days, when people are showering more and watering their gardens, it soars past 1 million. 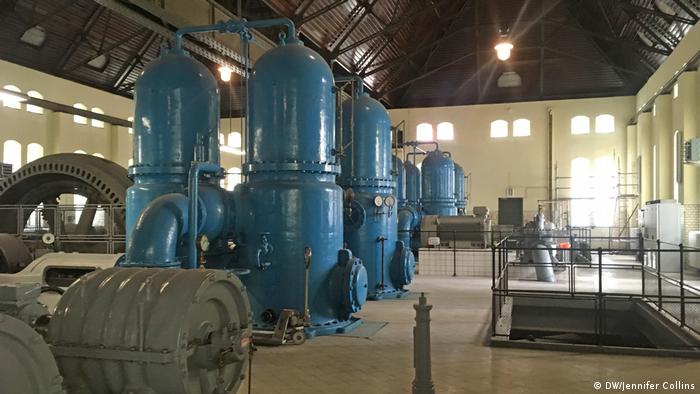 Old pumps at the Wuhlheide waterworks which was built between 1911 and 1916. The facility is still in operation today

Such unusually warm and dry spells are generally short-lived enough to mean the wells only have to run at high capacity for four or five days. But 2018 is different. Berlin has had no significant rainfall since February and temperatures have been warmer than average since April.

"The system that we have has never experienced what we're now experiencing. The system isn't meant for this," Feddern tells DW. In the past, the water utility was a "sprinter" over a few hot days. Now it has to be a "long-distance runner," and keep pace for longer.

So far, the utility has maintained its stamina, which is due, Feddern says, to investment in the network, careful management and experienced staff. But it's also partly down to luck, he adds.

Luck that no pipes have burst or wells have broken under the strain. Luck that there were no electricity shortages. But if long, hot summers become more likely, can the city's infrastructure keep up?

Further west in Berlin, Jörg Riemann sits in a bright airy office and tracks the weather from his computer. Droughts like this would once have led to starvation, but industrialization has tempered those effects, he explains, recalling the last time a summer drought had a direct impact in Germany. That was in 1976. "Drinks were running out — in the former German Democratic Republic anyway," says the head meteorologist at Wettermanufaktur, a startup that provides forecasts to help cities, for instance, to prepare for snow, ice, drought or whatever weather conditions are around the corner.

This year, the period from April to August, has been the sunniest, driest and warmest since records began at the Potsdam weather station in 1893.

According to Wettermanufaktur, that combination of factors makes 2018 one of those rare events only likely to occur every 200 to 400 years.

Since early spring, Germany has been in the grips of a "bone-dry easterly weather pattern," which is characterized by aridity regardless of the temperature. For now, there is no end in sight, Riemann explains, adding that the past few years have shown a "tendency to extremes" such as these.

Is climate change the culprit? It's weather, says Riemann, and researchers can't come to conclusions based on a single year, but have to look at long-term trends over decades. Still, recent studies have connected the European drought to global warming. 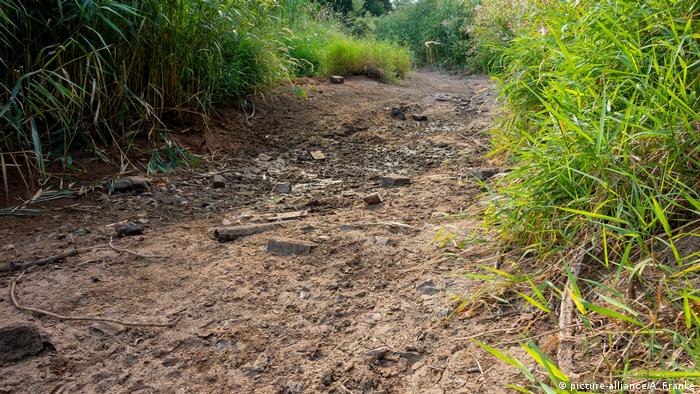 The effects of this long, hot and dry summer are visible in Germany's rivers and lakes

One thing is for sure, this year's combination of record sunshine hours — and their evaporating effects — lack of rainfall and long-lasting warm temperatures have caused unusually dry soil conditions and a significant drop in groundwater levels.

"We're a lot lower than we should be," says Feddern, and a steady rain would help matters.

That said, Berlin isn't about to run out of water because two-thirds of its supply comes from a "riverbank filtration system," that sees water from several of the city's rivers and lakes seep through the soil.

And in an extraordinarily hot, dry summer when the rivers are less full, Berlin can hold water using a series of dams. This artificially increases levels, thereby giving groundwater levels a boost.

Read More: Berlin and Beyond: Summer in the city

While that may be good for the German capital's population, it's not good for aquatic life says Werner Kloas, head of the Department of Ecophysiology and Aquaculture at Leibniz-Institute of Freshwater Ecology and Inland Fisheries in Berlin.

"We have a problem that fish also can't get out," he told DW. "We have too many controlled — or dammed — bodies of water."

Because heat compromises water's ability to absorb oxygen, Kloas says the city's aquatic life is already suffering, and that using dams to slow the flow exacerbates the situation by making oxygenation even more difficult.

As this can result in animal deaths and reduce biodiversity generally, he recommends building fish ladders to allow the animals to migrate.

BWB says it has high biodiversity at many of its water sites and has measures in place to protect animals there such as otters and frogs.

Jens Feddern of Berlin's water utility says it's also working with the city's government on the "Water Masterplan" to ensure faucets don't run dry in the future.

As such, the water utility is looking at Berlin's population growth, where new wells could be built, if its pipe network is flexible enough to deal with extreme heat or rainfall and whether the capacity of its waterworks should be increased.

It's also collecting and analyzing data to figure out where it should be investing in order to deal with new extremes. Summer 2018 may have been "exceptional," says Feddern, but in the last few years "something has changed."

We often think about the impact of climate change in physical terms – extreme weather, species extinction, and the destruction of habitat. But what about the emotional toll it takes on us? (31.08.2018)

The unexpected hot spell in Germany this summer has dried up many of the country’s lakes and rivers, revealing not just parched riverbeds, but in some cases sunken historical treasures. (20.08.2003)