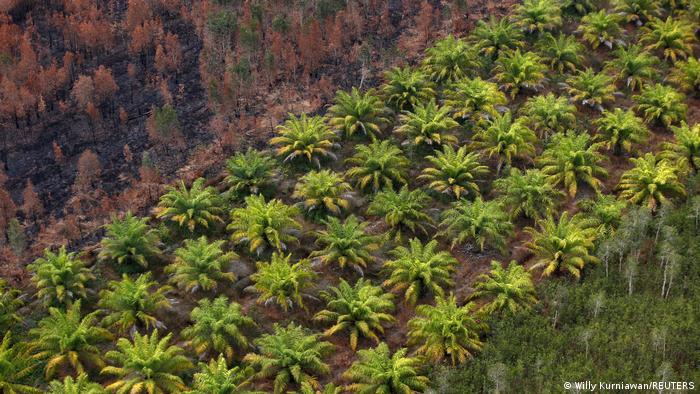 Rainforest is burnt to give way to palm oil plantations

It's safe to say that palm oil doesn't have a cracking reputation. From the British supermarket ad about an orphaned and homeless orangutan to food and cosmetics products loudly labelled with "no palm oil" stickers, it is widely portrayed as the bad boy of the veggie oil industry.

That said, it is the most widely produced, used and traded edible vegetable oil out there. And because it's so versatile, not to mention lucrative, more and more forested areas have been cleared to make way for places to grow it. Particularly in Indonesia and Malayisa, which collectively produce the vast majority of the world’s palm oil.

And that's not exactly good for the environment. In fact, it's disastrous.

Because when tropical rain forests are cleared, it destroys the habitat of many different species. In addition,trees and soil help us store carbon — essentially working as a carbon sink. And we need them to help absorb the abundance of CO2 we're still producing.

It looks many will have to cut down on their palm oil consumption because Indonesia, the world's largest exporter, has now announced that it will no longer be selling its stocks for export. The move is designed to counter the rising prices of domestic cooking oil. Edible oil prices have been going up worldwide ever since Russia and Ukraine, both sunflower oil exporters, went to war.

Last year Sri Lanka banned imports of palm oil, while also introducing plans to phase out its own plantations and replace them with rubber or other environmentally friendly crops.

But, given the myriad uses of palm oil, getting rid of it altogether might be easier said than done. Far from just being the evil ingredient in our much-maligned chocolate spreads, it also sneaks its way into our cosmetics, pharmaceuticals, our industries, our favorite snacks and our cars.

In fact, Europeans use it keenly as a source of biofuel. And far from being a green alternative to fossil fuels, palm oil diesel actually releases up to three times as many emissions as its petroleum-based alternative. Not ideal. 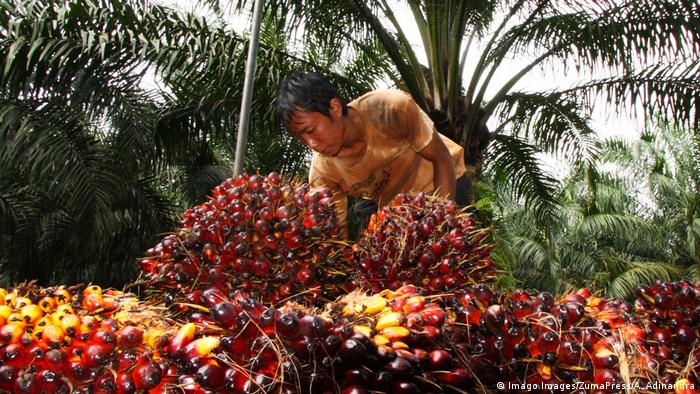 The oil from palm fruits is even used as biofuel

A couple of years ago, the European Union decided to ban palm oil as a biofuel. But within  months, leading producers Indonesia and Malaysia had lodged complaints against the European directive with the World Trade Organization. Now the bloc is aiming to phase out palm-oil based fuels by 2030.

Why can't we just use different veggie oils?

It's complicated. Even though cultivating palm oil crops has led to deforestation and to some instances of draining and burning peatland in Southeast Asia, oil palms (which confusingly are the trees on which palm oil fruits grow) have a relatively high crop yield. That means we get a lot of oil from a small patch of land.

If, however, that land were given over to other crops that don't yield as much, we would likely need a greater area on which to grow alternative oil-producing crops. Up to nine times as much, according to the International Union for Conservation of Nature (IUCN). And that would potentially lead to even more deforestation.

Yes and no, really. Instead of a blanket ban, the ideal route would be to improve planning of new plantations, to avoid eradicating tropical forest — which as mentioned, we need — while ensuring sustainable production of palm oil.

Back in 2004, various stakeholders from the industry set up the Roundtable on Sustainable Palm Oil (RSPO). Conservation organization WWF is a member and has a note on its website saying the certification means the "palm oil was produced in a socially and environmentally responsible way."

Not exactly. Though hundreds of companies have now been granted the right to stamp their products with the RSPO seal, environmental groups from around the world have slammed it as greenwashing. Among them is Greenpeace, which has described the RSPO as of no more use than a "chocolate teapot." Which is clearly not much use at all. Even if said chocolate were palm oil free.

A recent Greenpeace report went further, highlighting "weak implementation" of RSPO standards, audit failures and a liberal understanding of membership criteria. Overall, the report found that the certified oil cannot be guaranteed to be free of deforestation or human rights abuses.

Where does that leave us?

The best question yet ... and a difficult one.

Greenpeace and other environmental groups are pushing for government legislation instead of industry certification, which they say dumps the "responsibility to assess the quality for a certified product onto the customer."

In having official regulations, they reckon that there is a greater chance that the products we eat and use will not come at the cost of environmental destruction and violations of human rights.

In the meantime, business owners can also do their bit by checking to ensure that no one along their supply chains is contributing to deforestation.

As for the rest of us, we can find out which of the products on our shopping lists contain palm oil and check whether companies are keeping their promises. And we can make noise to push for greater transparency and cleaner products.

Carmakers like VW, BMW, Daimler, PSA and Renault have been linked to Amazon rainforest deforestation in a new study. It said the firms may be using leather from cattle raised on illegally deforested land for their seats.