Biofuels: Good or bad for the environment? | Environment | All topics from climate change to conservation | DW | 25.06.2018

Biofuels: Good or bad for the environment? In the early part of this century, as governments grappled with how to most effectively combat global warming, policymakers put carbon emissions caused by transport in their crosshairs.

Transport, after all, accounts for 22 percent of energy-related greenhouse gas emissions worldwide. Emissions in that sector are increasing faster than any other, due also to steady growth in the use of personal cars in the developing world. 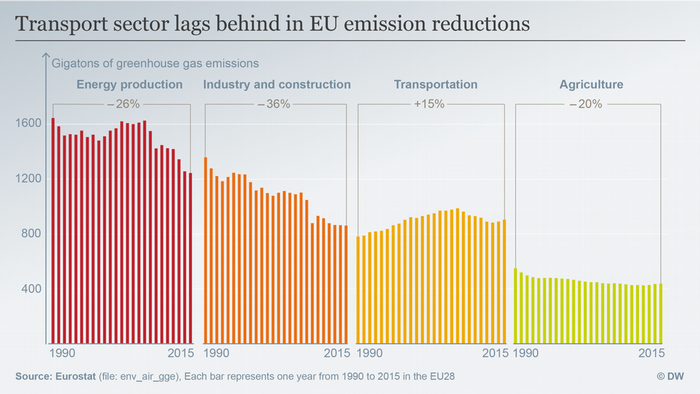 And so governments came up with what they thought was the perfect solution: What if the cars could burn naturally occurring, renewable biofuels instead of fossil fuels? Bio-based crops don't emit carbon — or so they assumed.

Brazil established its ethanol fuel program 40 years ago, and today is considered to have the world's first sustainable biofuels economy, with almost all cars burning some element of biofuel.

In 2005, the United States established its first national renewable fuel standard under the Energy Policy Act, calling for 7.5 billion gallons of biofuels to be used annually by 2012.

The law obliges fossil fuel providers to mix in biofuel, mainly biodiesel from oilseed and ethanol from corn. Thanks to America's plentiful corn production, the US is today the world's largest ethanol producer.

The European Union established its own biofuel requirements in the 2008 Renewable Energy Directive, which required EU countries to source at least 10 percent of their transport fuel from renewable sources by 2020.

The stringent requirement has resulted in a huge growth in the biofuel industry.

So it's a happy ending, right? Not quite.

Bloom is off biofuel rose

Shortly after these laws were passed 10 years ago, problems began to emerge.

Farmers across the world, particularly in South America and Southeast Asia, were incentivized to start growing crops for fuel instead of food. Government targets meant an artificially inflated market, which began to drive up food prices and change land use. The changes have resulted in food shortages, according to nongovernmental groups.

That change in farming land use, experts say, is actually causing more carbon emissions than biofuels are able to abate in the transport field, because farmers are razing forests in order to grow biofuel crops.

A study made public in 2016, commissioned by the European Commission, the EU's executive branch, concluded that the EU's renewables law has probably increased carbon emissions since it was put in place in 2009.

Those increased emissions happen not only when a forest is cleared to grow biofuels, but also when a field that was used to grow food switches to growing crops for the more profitable biofuel.

This phenomenon, known as "indirect land use change" (ILUC) can cause new land to be cleared to grow the food crops. When land is cleared, carbon locked up in woody matter like bushes or trees is released into the atmosphere. 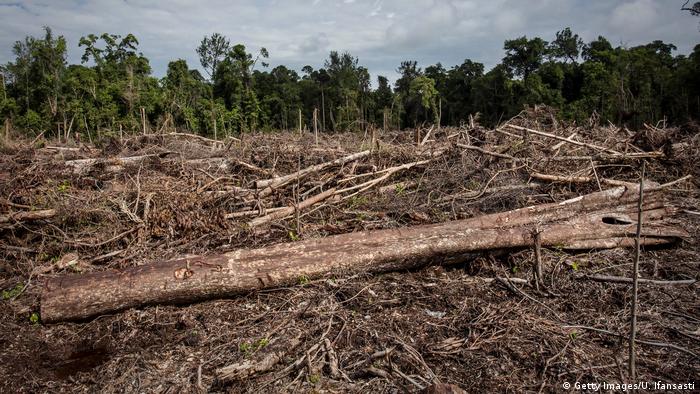 Rainforest is being cleared for palm oil in places like Indonesia, threatening iconic species like the orangutan

As the consequences of the policy became clearer, environmental and anti-hunger campaigners have pushed these governments to end their policies supporting biofuel.

"Biofuels made from palm oil, rapeseed, and other food crops are destroying forests, pushing people off their land, and could fuel the next spike in food prices," said Marc-Olivier Herman, a campaigner with Oxfam.

"Biofuels made from food crops are not the answer to climate change; they are part of the problem."

The battle to backtrack on the renewable fuel incentives has been particularly fierce in Brussels, where environmental campaigners have clashed with the increasingly powerful biofuels lobby and farmers groups like Copa-Cogeca.

Of all biodiesel, palm oil has the highest greenhouse gas emissions — three times the emissions of fossil diesel, because palm expansion drives deforestation and peatland drainage in Southeast Asia, Latin America and Africa.

Last year, 51 percent of the palm oil used in Europe ended up in the tanks of cars and trucks, according to Oil World, the industry reference for vegetable oils markets. This makes people who drive vehicles the top consumers of palm oil in Europe — even if they're unaware of the fact.

"Europeans don't want to be forced to burn palm oil or food in their cars," said Laura Buffet from sustainable transport group Transport & Environment (T&E). "It's a disaster for the climate and biodiversity."

However, the biodiesel industry says the science behind measuring the ILUC caused by biofuels, and the emissions that might result, is inconclusive and not firm enough to justify making a U-turn on renewables support policy.

This June, EU lawmakers agreed to limit the amount of crop-based biofuels that can be used to meet EU renewable targets. However, they declined to institute an outright ban on palm and soybean oil as called for by campaigners.

While updating the EU's overall renewable energy law for the period between 2020 and 2030, the lawmakers decided to keep a renewable transport fuel target, increasing it to 14 percent by 2030 (part of an overall increased renewable energy target of 32 percent).

Lawmakers say the eventual decline in market demand will result in the use of palm oil to be gradually phased out after 2023, resulting in the eradication of palm oil from Europe by 2030.

But environmentalists and the biofuel industry are skeptical that this will actually be the case. The European Biodiesel Board (EBB) has welcomed the legislation outcome, knowing it could have been a lot more restrictive.

By keeping crop-based biofuels such as biodiesel stable at 7 percent, the agreement recognizes their importance for the EU's transport mix, the EBB says. Meanwhile, the limits on crop-based biofuels are unclear and open to interpretation by national governments, EBB and other groups say.

Oxfam's Herman agrees about the lack of clarity, pointing out that "EU member states will still be allowed to burn massive amounts of food."

The transition to second-generation advanced biofuels, which are not based on food crops but rather substances like algae, will be key.

These types of biofuels are still being developed, and have not yet reached their full commercial potential. But a new requirement inserted into the EU renewables law will require member states to source at least 1 percent of the renewable transport fuel from advanced biofuels by 2025, and 3.5 percent in 2030. This may stimulate investment.

Industry influential in Brazil, US

Meanwhile, in the United States and Brazil, the trend has gone in the opposite direction.

In the US, the government is reportedly preparing to revise its renewable fuel standard program in a way that would require large refiners to use even more biofuels.

Biofuel subsidies are considered politically untouchable: Corn growers are located in US states that are key to the American presidential primary elections, because they vote early.

In Brazil, forest protection groups have been unsuccessful in convincing the government to do anything that might displease the powerful ethanol industry. Indeed, the government views the country's biofuel growth as a success story rather than something to worry about.

Campaigners are quick to point out that not all biofuels are bad. But many of the biofuels that have been used to meet government targets over the past year made from food crops, which is a problem.

Environmental groups are continuing to push to end subsidies for food-based fuels, and put policies in place that will incentivize the development of advanced biofuels.

But as every politician knows, once you put a subsidy in place, it's very hard to get rid of.

French farmers have started a three-day blockade of refineries after a decision by Total to import cheaper palm oil for its biofuel plant. The move has fanned farmer discontent over unfair competition. (11.06.2018)

In recent years, Peru's sprawling jungle has been cleared for palm oil and cocoa plantations. Conservationists say the land is controlled by private companies who acquired it through corrupt means. (31.05.2018)