No hope for orangutans? Ahead of International Orangutan Day on Saturday environmentalists says the big apes are still on the brink of extinction due to deforestation. 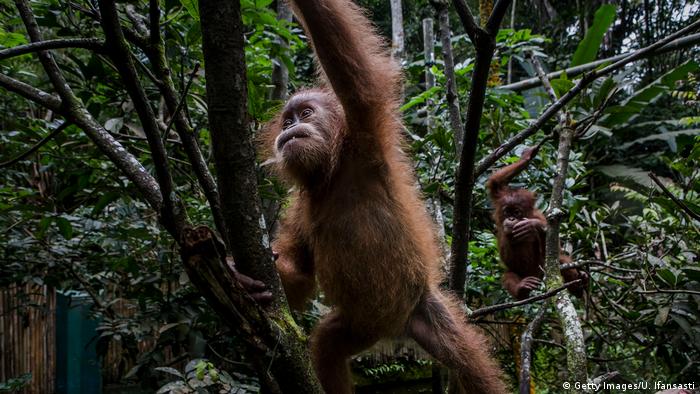 The most iconic victims of the palm oil industry, or deforestation in Asia in general are undoubtedly orangutans. The big apes with reddish fur and friendly faces are always held up as a major casualty of the monocultures for which rain forests are felled on a grand scale.

Within just 30 years, the habitat of the nimble climbers of the tropical rainforests has almost halved, reports the WWF ahead of the International Orangutan Day on Saturday. That loss of habitat is reflected in the small number of animals still living in the wild on the Southeast Asian islands of Sumatra and Borneo.

According to the IUCN Red Listboth species are classified as "critically endangered". The WWF says there are only about 54,000 Borneo orangutans left in the forests, which is four times less than 100 years ago. On Sumatra, numbers are down to some 6,600 animals.

More than anything, palm oil is responsible for the loss of big ape habitat. Worldwide, demand has almost doubled over the last ten years. Its properties, that not only prevent chocolate spread from going hard, but also lend themselves to cosmetics manufacture, are practical for many industries. And the palm oil tree is also known as a quick grower that promises big harvests and as such, income for farmers. 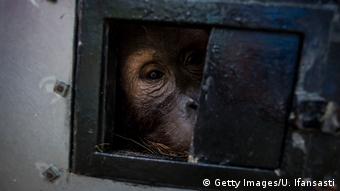 It's therefore no surprise that more trees in Indonesia and Malaysia are falling to meet the demand of the main palm oil consuming countries of Indonesia, China, India and in the European Union. The monocultures that grow up on the razed ground only alter the countries faces but also impact the survival of many species that rely on the rainforests for food and protection. Orangutans are just one example.

What people can do

From an environmental point of view, consumers are the key to help protecting the charismatic apes. If, for example, people start asking for certified palm oil, or if they go without it entirely, a great deal can be achieved. Likewise, it helps to restrict our use of cars and eat less meat. After all, the pressure on the forest of Sumatra and Borneo is growing because palm oil is used in biodiesel and animal feed.

The work of environmentalists on the ground may also require some more attention. In Bukit Tigapuluh, an national park in Sumatra, the Zoological Society of Frankfurt runs a school for orangutans. Here, apes rescued from captivity learn how to master life in the wild.

The orangutans of Bukit Tigapuluh are to be released back into the Indonesian rainforest. But, first they need to train and master a whole host of skills that apes need to survive in the wild. (09.12.2014)