Pakistan′s Khyber Pakhtunkhwa — a difficult province to govern | Asia | An in-depth look at news from across the continent | DW | 09.03.2018

Good governance, speedy justice and an end to terrorism: Pakistani politician Imran Khan had promised to turn Khyber Pakhtunkhwa into a "model province" after the 2013 elections. Five years on, what has he delivered? 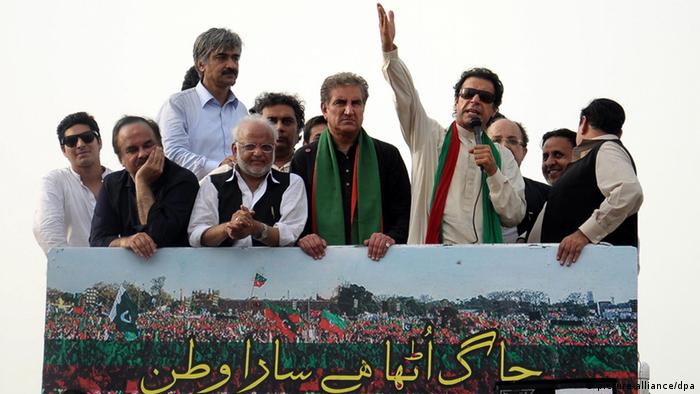 In a 2016 address to his Pakistan Tehreek-i-Insaf (PTI) supporters in Mingora, a small town in Khyber Pakhtunkhwa (KPK) province, cricketer-turned-politician Imran Khan said he would turn KPK into a "model province" by 2018. He made similar claims in the run-up to the 2013 general elections, in which his party failed to secure a majority countrywide but managed to form a government in the northwestern KPK province that borders Afghanistan. Khan, who as a cricketer had spent many years living in the UK, promised to introduce Western-style governance and a social welfare system to the province.

One can ignore those lofty claims as election sloganeering. But Khan has incessantly lampooned the Pakistan Muslim League's federal and Punjab governments as "corrupt" and "incompetent" in the past five years. As the 2018 general election approaches (the dates haven't been announced yet), Khan has once again pledged to "rebuild" Pakistan, make it an economic power, end corruption and introduce good governance to the country if he becomes prime minister. It is therefore pertinent to analyze the five-year performance of the KPK government to gauge whether Khan could deliver on a national level.

"We mainly focused on health and education in the province. We also introduced police reforms and made great strides there. The previous government of the Awami National Party was corrupt and the people voted it out. On the other hand, more people are joining our party due to the incumbent government's fine performance," Shaukat Yousufzai, advisor to the KPK chief minister, told DW.

But Shamim Shahid, a Peshawar-based journalist, says the performance of the KPK government has been "disappointing."

"PTI officials claim the standard of education in the province has improved but educationists think otherwise," Shahid told DW. "The situation of public health and other government-run departments is not any different. The province has been hit by public sector strikes. People have even held demonstrations outside Khan's Islamabad residence," he added.

The PTI's main focus has been on weeding out corruption in Pakistan. Its manifesto resonates well with a large section of the Pakistani middle class due to its emphasis on governance issues — particularly corruption and political accountability.

Khan promised speedy justice and an end to corruption in the Khyber Pakhtunkhwa province after taking over its reins in 2013. But Arshad Mahmood, an Islamabad-based writer and social activist, believes "things are pretty much the same as they were in the past."

"Khan's party workers consider themselves to be above the law and won't cooperate with the administration. If the PTI officials don't obey the law, how will governance be improved?" Mahmood asked. But Khan's supporters, which comprise mainly Pakistani youth, feel his KPK administration is being unfairly criticized.

"The government has made great strides in a faster and more effective judicial system. The education budget of the province is much bigger than in other provinces. Yes, there are problems, but things are improving," Zakria Zubair, a young entrepreneur in Islamabad, told DW. The 31-year-old PTI supporter also says that Imran Khan is playing the role of a competent opposition leader in the country's lower house of parliament.

Khyber Pakhtunkhwa province's proximity to Afghanistan and the militant sanctuaries in the adjacent Federally Administered Tribal Areas of Pakistan make it an extremely difficult province to govern. Although good governance has the potential to improve the security situation, the issue of Islamic extremism in the area is complex and goes far beyond the ambit of the KPK provincial government.

"Combating terrorism is primarily a federal subject in Pakistan. However, provincial governments play a key role in improving the overall security situation. In this regard, the KPK government's performance can be dubbed 'satisfactory.' Police reforms have brought some improvements," Aatif Afzal, an Islamabad-based political analyst and human rights activist, told DW.

"But the PTI did nothing to counter the extremism narrative. Actually, it strengthened it by introducing conservative changes to the educational curriculum on the demands of its conservative allies in the province, mainly the Jamaat-i-Islami party," Afzal underlined.

Pakistan's liberals accuse Khan of having a "soft spot" for the Taliban and other anti-US militant groups in the region. The KPK government also favors negotiations with the Taliban in Afghanistan and Pakistan.

Khan insists there is no military solution to the Islamist conflict in the region. "The US also wants to negotiate with the Taliban, as Washington could not get fruitful results in Afghanistan through military means. The US has spent trillions of dollars without success in this war," Khan told DW in an interview in August last year.

"Pakistan has suffered a lot; we have lost 70,000 people in this war, in which we had nothing to do. In my opinion, we should stay out of the war," Khan added.

A worrying sign for Khan in KPK province is the rise of a pro-peace Pashtun movement that holds the military establishment's policies responsible for the killings and displacements in both their province and in Afghanistan. Supporters of the movement, mainly secular and nationalistic Pashtuns that live on both sides of the porous Afghanistan-Pakistan border, see Khan and his PTI party as collaborators with the military.

The Pashtun peace movement is also backed by the Awami National Party, which lost to the PTI in the 2013 election and is now eyeing a return to power. Analysts say that terrorism and Pakistan's ties with Afghanistan would once again play a pivotal role in the upcoming elections.

"I lived in Peshawar from June 2015 to October 2016, and traveled extensively around the province. I think it will be hard for the PTI to repeat their 2013 electoral performance," Afzal said.

At the same time, journalist Shamim Shahid says the PTI is facing internal rifts. "Many provincial lawmakers have revolted against the KPK chief minister and Imran Khan. Jamaat-i-Islami, a major coalition partner in the province, was reluctant to support PTI in Saturday's senate vote. At least six PTI lawmakers from Khyber Pakhtunkhwa province did not vote for the party candidates for senate," Shahid said.

If recent by-elections and an apparent revolt in his party are any indications, Imran Khan is heading toward another difficult period in his political career. Political analysts say the main problem with Khan and his party is that they have not been able to back up their performance by displaying that "model province" to the rest of Pakistan that Khan had promised to build some years ago. On the other hand, Khan's main political rival, former Prime Minister Nawaz Sharif, has been steadfast in his non-confrontational and development-based politics, they say.

The vote potentially paves the wave for a return to power for the embattled former prime minister Nawaz Sharif. Sharif has been at odds with the country's judiciary since the high court forced him from power last year. (03.03.2018)

In a DW interview, Saif-ul-Malook, the lawyer of Asia Bibi, a Christian woman sentenced to death in 2010 for committing blasphemy, says while international support for Bibi is encouraging, he is not hopeful for clemency. (06.03.2018)

Opposition leader Imran Khan wanted to bring down Pakistani PM Sharif's government through street protests, but he has failed to do so once again. Many in the country are already questioning his political acumen. (02.11.2016)