Lawyer: Presidential pardon for Pakistan′s Asia Bibi ′unlikely′ | Asia | An in-depth look at news from across the continent | DW | 06.03.2018 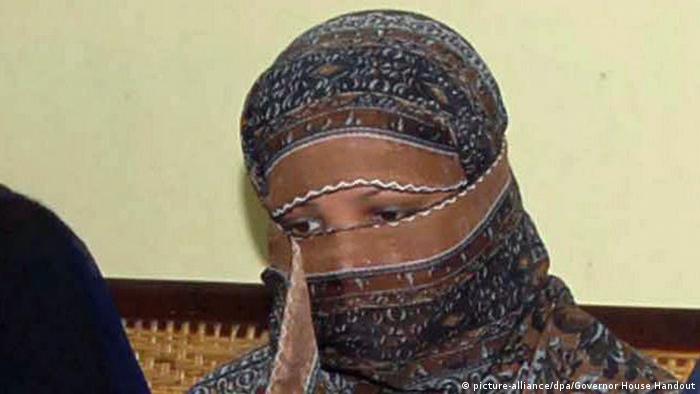 Asia Bibi has been languishing in prison for almost nine years now. The 53-year-old mother of five was arrested in June, 2009, after her neighbors complained that she had made derogatory remarks about Islam's prophet, Muhammad. A year later, Bibi was sentenced to death under Pakistan's controversial blasphemy law despite strong opposition from national and international human rights groups.

Bibi appealed against her death sentence but her last appearance before Pakistan's Supreme Court in 2016 was adjourned amid Islamist protests.

In 2016, Bibi's husband Ashiq Masih asked for presidential clemency for his imprisoned wife and wrote to President Mamnoon Hussain, seeking permission to move her to France, where the Council of Paris had unanimously adopted a proposal to award honorary citizenship to Bibi the same year.

But there has been overwhelming opposition to Bibi's release in Pakistan, where the issue is no longer only religious but also highly political. A few months after Bibi's conviction, Salman Taseer, a former governor of the Punjab province, was even murdered by his bodyguard, Mumtaz Qadri, because of his efforts to amend the country's blasphemy laws and his support for Bibi.

According to media reports, Jan Figel, the EU's Special Envoy for Freedom of Religion or Belief, told Pakistani officials that the renewal of their export privileges to Europe was linked to Bibi's release.

Will Pakistani authorities pay heed to the demands of the international community and release Bibi? What could be the political repercussions of such a move?

In an interview with DW, Bibi's lawyer Saif-ul-Malook talks about the current status of Bibi's case, the possibility of a presidential pardon for Bibi, and the sensitivity surrounding the issue of blasphemy in Pakistan.

DW: Would you shed light on the present status of Asia Bibi's case?

Saif-ul-Malook: Bibi's appeal is pending before the Supreme Court of Pakistan. I hope we will get the date for a final hearing soon.

The last time the apex court heard the case was in October 2016. Later, the case could not be taken up as one of the judges recused himself on the ground that he had been dealing with Mumtaz Qadri's case as chief justice of the Islamabad High Court.

But that happened a year-and-a-half ago. Why has the Supreme Court not fixed another date for hearing?

I think it is not a very high priority case for the court. The last time I met the Supreme Court registrar, he told me that over 2,000 appeals against death sentences were pending before the court. But we hope to get a date pretty soon.

Have you faced any threats from extremist groups for taking up Bibi's case? What motivates you to continue your legal fight for her?

No lawyer was willing to prosecute Mumtaz Qadri because they all feared for their lives. But I prosecuted him and finally got him convicted.

Asia Bibi's case was linked to that of Qadri's. I think someone has to take up such cases. Every citizen has the legal right to be defended by a lawyer of his or her own choice.

Does the international support for Bibi work for or against her?

But international support does encourage me and Bibi. You feel strong when your work is appreciated and supported. When I tell Bibi that so many countries want to grant her citizenship, it gives her courage and makes her forget that she has been imprisoned for nine long years.

Is Bibi being treated well in prison?

Yes, I can assure you that she is being treated well. I visit her quite often. She has no complaints against the prison officials, who are all women.

Are Bibi's family and friends also facing threats in Pakistan?

To support someone who is accused of blasphemy is extremely dangerous in Pakistan. It is a very sensitive case. So yes, people close to Bibi are in danger. We pray to God for their safety.

Is there a chance for a presidential pardon for Asia Bibi?

I don't think so. The opposition from a large section of the Pakistani society is so immense that I don't think that Bibi would get a presidential pardon. According to the country's constitution, the president acts on the prime minister's advice, and I don't think any civilian premier in Pakistan can afford to make such a request to the president.

The interview was conducted by Shah Meer Baloch in Islamabad.