The case of Asia Bibi: A husband fights for his wife

The fear is a constant companion for Ashiq Masih. The husband of Pakistani Christian woman Asia Bibi, who is sentenced to death for blasphemy, spoke to DW about his struggle to save his wife's life. 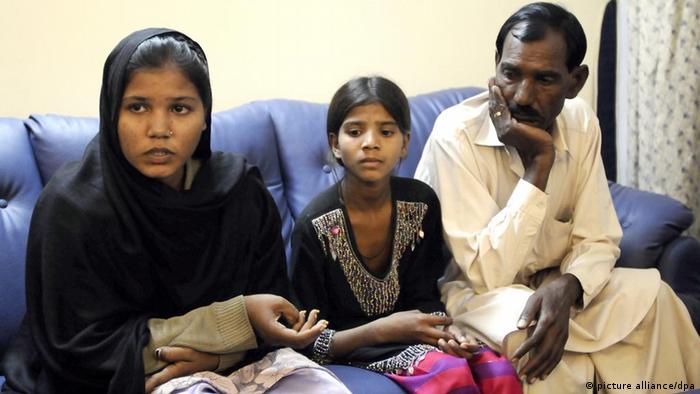 "We are alive, but have no life," said Ashiq Masih, a man filled with sorrow and despair. His wife, Asia Bibi, has been on a death row in Pakistan for over four years now. She was convicted by a court in the Punjab province in 2010 for violating the Islamic Republic's controversial blasphemy law. Muslim women from her village had accused Bibi, who is Christian, of making derogatory comments about Prophet Mohammed.

Ashiq Masih (seen in the main picture, alongside two of his daughters) has been fighting a desperate battle for the life and freedom of his wife ever since. Her story sparked international outrage: human rights organizations, the European Parliament and the then Pope Benedict called for her release. But despite all the clemency appeals and legal efforts, Asia Bibi remains in prison to this today. 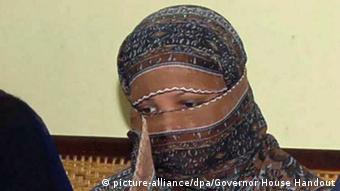 Asia Bibi has been on death row since November 2010

Last fall, a court of appeals upheld the sentence. Asia Bibi appealed against the ruling and the case is now being decided by the Supreme Court. It is the last chance to avert the judgment. However, the country's highest court can still take months or even years to reach its decision.

A life in fear

This is an agonizing time for Ashiq Masih and the five children of the couple. "We are living a life on the run" he told DW. "Our lives are being threatened. We receive death threats constantly and are moving from one place to another - and we try to support each other." His family's life has been destroyed, he says: "I spent almost 45 years of my life in my native village. I had many friends there. Now I do not want to go back."

Ashiq Masih is also scared. He is afraid of being recognized as Asia Bibi's husband in public. "This is why I almost never speak with Muslims. I am frightened that they know who I am."

A former Pakistani minister has announced a reward for the heirs of the Charlie Hebdo attackers. This has shocked the West but not the Islamic country's activists, who say that most politicians now appease the Islamists. (04.02.2015)

Rights groups have criticized Pakistan's decision to lift a ban on capital punishment as the South Asian country moves to execute terror convicts. AI's David Griffiths tells DW the death penalty is not the answer. (18.12.2014)

The police has filed a case against singer-turned-preacher Junaid Jamshed, accused of insulting Islam. Religious groups have appealed for his pardon, but liberals ask why the country's minorities don't deserve clemency. (05.12.2014)

Christians aren't treated as human beings in Pakistan, he says. Christians represent only a small minority - about 2.8 million - in the South Asian nation, which has a total population of more than 180 million. Approximately 97 percent of Pakistanis are Muslim.

Pakistan's controversial blasphemy laws have been in place since the 1980s. Critics argue the legislation is being misused by the authorities as a tool to take revenge or arbitrary actions. But they are also used to settle political or economic disputes, and to eliminate or put pressure on unpopular individuals and minorities, they claim. All previous attempts to reform them have failed due to resistance from the conservative politicians and religious hardliners.

Although no death sentence has been carried out by the state in recent years for violating the blasphemy laws, some of the accused end up being killed by vigilantes. In November 2014, for instance, a Christian couple was lynched and burnt to death for alleged blasphemy by an angry mob.

In 2011, two politicians who had lobbied for reforms and for Asia Bibi were murdered. Salman Taseer, the governor of Punjab province, was shot dead by his own security guard and Pakistan's minorities minister, Shahbaz Bhatti, was killed during an attack on his car while he was on his way to work.

In need of support

Ashiq Masih also fears that something might happen to him or his daughters. Yet he wants to tell the story of his wife to the world. He has already collected more than 18,000 signatures through the Catholic relief mission. 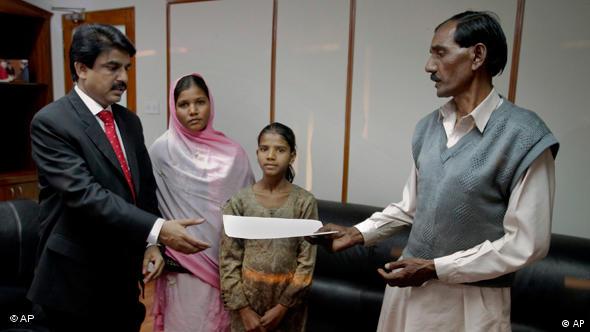 In 2010 Ashiq Masih filed a clemency plea for his wife

On February 24, he is set to talk at this year's Human Rights Summit in Geneva, seeking more international support for his wife.

And he has a clear message: "I call on the human rights organizations and the international community to continue supporting us with the effective handling of the Asia Bibi case."

Since that summer day in 2009 when, according to Muslim villagers, Asia Bibi made derogatory remarks about the Prophet, his family has lost everything. "My children do not have their mother anymore. They are missing something very important. I need my wife, the children need their mother."

Giving up is not an option for Ashiq Masih, who has vowed to keep on fighting: "We trust in God's help and hope that one day my wife will be with us and then we can live in peace."