Opinion: The West must demand changes to Pakistan′s blasphemy laws | Asia | An in-depth look at news from across the continent | DW | 07.11.2014

Once again terrible news is coming out of Pakistan. The country's strict blasphemy laws are once more at the focus of attention after yet another spate of recent extra-judicial killings, writes DW's Grahame Lucas. 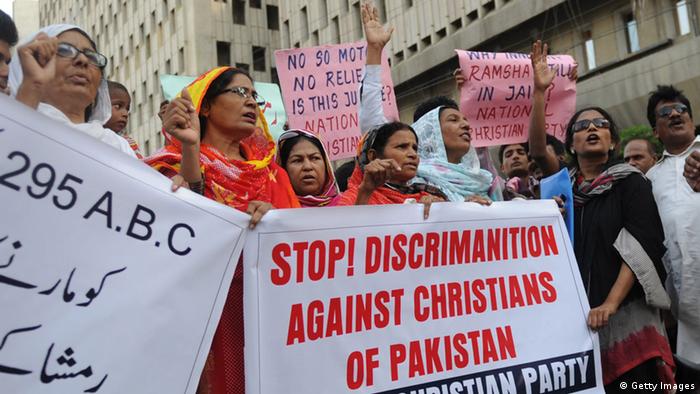 In the last few days, the continuing abuse of Pakistan's blasphemy law has been there for all to see. Again. A Pakistani policeman, whose job it is to uphold law and order, bludgeoned a man accused of insulting companions of the Prophet Mohammad to death in a holding cell in a police station in the city of Gujrat. By way of an excuse, the police claimed the accused was mentally imbalanced. But there can never be an excuse for such a blatant violation of human rights. A proper judicial investigation into the incident is unlikely to go anywhere. 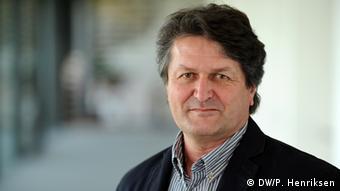 Just days earlier, another horrific killing made the headlines. After being accused by the local mosque of committing blasphemy, a Christian laborer and his wife were beaten to death by a mob and thrown on a furnace for allegedly desecrating a Koran. The woman was pregnant. The charges were obviously trumped up by local religious leaders and the laborer's employer. Although Pakistan's Prime Minister Nawaz Sharif condemned the incident, he clearly has no mandate and certainly no ambition to repeal the controversial blasphemy law. He knows only too well that aspirations of this kind can be fatal in Pakistan. In 2011, the federal minister for minorities, Shahbaz Bhatti, who sought to abolish Blasphemy Law, was murdered by the Pakistani Taliban.

Pakistan's blasphemy laws have long been contentious. Introduced originally under British rule, they were tightened up by General Zia-ul-Haq in the 1980s. The times were fortuitous. The Islamic Republic of Pakistan was helping the US to fight the communists, the non-believers, in Afghanistan. Haq, a religious hardliner who had seized power and then had Pakistan's deposed prime minister, Zulfiqar Ali Bhutto executed, sought to subject public life in Pakistan to Islamic rules. His policies also did much to make the introduction of Shariah fashionable in other Muslim countries. More than anything else, Haq's reforms strengthened the position of religious zealots in Pakistan to the extent that today they are free to whip up public sentiment on any issue that appears to be in their interests.

Ostensibly, blasphemy against any religion is prohibited under Zia's reformed Penal Code. In practice, however, it is open to abuse and is used primarily against anyone deemed to have insulted Islam. Seeing as it only requires one witness for charges to be filed and that information about the evidence cannot be disclosed because that in itself would constitute blasphemy, the process of prosecution is fatally flawed from the outset. Moreover, lawyers shy away from defending the accused. After all, they might be killed too. A fair trial is impossible.

Thus, the present law is an open invitation to religious zealots or simply opportunists to use Islam to attack anyone for the most primitive of reasons. Not surprisingly, most of the cases are, in the view of human rights experts, based on revenge, hatred or the desire to grab someone's property. It comes as no surprise to learn that most of the accused are the weakest members of society - members of religious minorities like Ahmadiyyah-Muslims, Christians or Hindus.

Just recently a Christian mother of five, Asia Bibi, who was sentenced to hang in 2010, had her final appeal to the Lahore High Court rejected. Her case illustrates just how absurd blasphemy allegations usually are: Bibi was out picking berries with a group of Muslim women who accused her of drinking from the same water bowl. As she was viewed as an "unclean" Christian, this constituted blasphemy. Bibi was then reported to the local Imam who triggered blasphemy charges. A courageous politician, Punjab's former governor Salman Taseer, who intervened on Bisi's behalf, was shot dead in 2011 by a crazed security guard.

What is very obvious from the outside is that Zia-ul-Haq took Pakistan down a road from which no return appears possible at the present time. Extremist religious leaders and fanatics have attained such influence in and over the public domain in the last thirty years that political action to curb their arbitrary abuse of power appears beyond the reach of the present political setup. All western countries can do is to draw attention to the abuse of blasphemy laws at all levels and the damage it is doing to Pakistan's already sullied reputation. They must continue to demand change. Germany now has an opportunity to do this. Prime Minister Nawaz Sharif arrives in Berlin at the weekend.