Ties have been strained between Afghanistan and Pakistan in recent months, with spiraling mutual distrust and antipathy proving a hindrance toward repairing a relationship critical for long-lasting peace in the region. 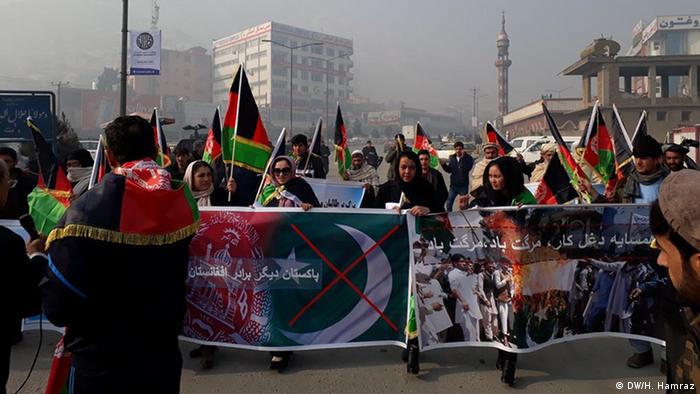 "Down with Pakistan," "Down with the Taliban," "Down with Daesh." These chants filled the air outside the Pakistani embassy in Kabul on Thursday when dozens of Afghans protested against Islamabad, blaming it for the latest wave of violent attacks rocking the already war-ravaged nation.

The demonstration was held on a day when Afghan officials said they had handed over evidence connecting Pakistan-based insurgents with a recent spate of attacks that killed more than 100 people in Afghanistan.

"I, as an Afghan citizen, came here today to express my hatred for our neighbor Pakistan," screamed one of the visibly upset female demonstrators who did not want to reveal her identity. "We are tired of this violence and loss of lives each and every day all across the country. We are tired of losing our soldiers on a daily basis. That's why we are against Pakistan, which houses the Taliban and the terrorists," said the woman.

The number of demonstrators was less than expected. Those who participated said many people had stayed at home due to fear of new attacks.

Roshan Ghaznawi, another protester and activist, referred to the 1990s when Afghanistan underwent a civil war. During this period, she said, many actors involved in the conflict were bankrolled by Islamabad and had their bases in Pakistan.

"The whole world knows the true intentions of Pakistan," Ghaznawi told DW. "They want to recreate the times of civil war when they managed to incite the Afghans against each other. But they should know that these times are over. We do not let our government isolate us and we stand together for peace," she said.

The demonstration was triggered by a string of brutal incidents over the past several weeks, killing and injuring hundreds of innocent Afghans. The attacks and bombings have plunged war-weary Afghan citizens into a state of despair and highlighted the limitations faced by the government in Kabul in ensuring public security.

The Afghan government blames Pakistan for these attacks. Afghan officials said Thursday that they had handed "undeniable" evidence to authorities in Islamabad showing the latest attacks were planned on Pakistani soil.

Mohammad Masoom Stanekzai, the head of Afghanistan's spy agency, told reporters Thursday it was clear that the attacks were "planned from across the border."

"We asked Pakistan to hand over the culprits of the attacks in Afghanistan and we shared undeniable evidence that the attacks were planned there," Stanekzai said, a day after meeting with top Pakistani officials in Islamabad.

Afghan Interior Minister Wais Barmak said the Afghans submitted a list of questions during Wednesday's "constructive" one-hour meeting, asking among other things what action Pakistan will take against Taliban leaders and training centers on their soil.

The Pakistani embassy in Kabul said the information provided by Stanekzai was "being examined for its authenticity." Pakistani Foreign Minister Khawaja Asif described the talks with the Afghan delegation as "productive," a ministry statement said.

The Afghan interior minister and the intelligence chief did not seem very convincing, said Yunus Fakoor, an Afghanistan expert. The analyst is of the view that their talks with Pakistani officials will not yield any positive results. It is not the first time that Afghanistan has handed over such information and demanded the authorities across the border to take action.

"Such demands haven't brought any solution in the past and will not bring any in the future," said Fakoor. "The Afghan government is under strong pressure to act. The population is angry and expects a reaction. That's why the government sent a delegation to Pakistan."

The expert described it as "a useless endeavor," and stressed that he sees no rosy future for the Afghan-Pakistan relationship. "Since the fall of the Taliban in 2001, relations between Pakistan and Afghanistan have never been as bad as they are today," he noted.

Meanwhile, most Afghans are simmering with anger, not only at the impotence of their government to ensure security, but also at what they see as the lack of cooperation from Pakistan to resolve the problem.

"For years, Kabul has tried to make peace with Islamabad and the Taliban," said Ahmad Shah Stanekzai, an activist in Kabul. "But these efforts have come to nothing. Now it's time to cut off all relations with Pakistan. Every day we see how men, women and children are killed in our mosques, schools and on the streets. It is enough!"

India ruled out sending troops to Afghanistan but said it would work with Kabul to eradicate terrorism. New Delhi's hesitance to be involved militarily in Afghanistan clashes with its concerns about Islamist proxies. (27.09.2017)