'IS' claims deadly attack on Save the Children office in Afghanistan

An attack on the Save the Children's office in Afghanistan has ended killing two and wounding 20, in the latest violence to strike a foreign aid group in the country. So-called 'Islamic State' has claimed responsibility. 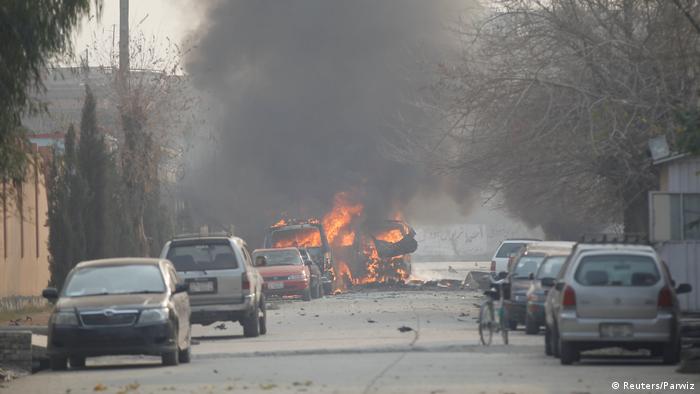 Vehicles on fire after the blast in Jalalabad

An attack on Save the Children's office in the eastern Afghan city of Jalalabad has ended with at least two people killed and 20 wounded, an official said on Wednesday.

"The fighting has ended. The security forces are clearing the building now," Attaullah Khogyani, a spokesman for the governor of Nangarhar province, told the French news agency AFP.

The four assailants — reportedly dressed as police — fired a rocket propelled grenade from a car outside the British charity's compound in the eastern city of Jalalabad.

They then clashed with security forces for about three hours, a provincial government spokesman said. Afghan TV news channels showed a plume of black smoke coming out of the compound and a vehicle on fire outside the office.

The so-called Islamic State (IS) group later on Wednesday claimed responsibility for the attack. "A martyrdom-seeking operation with an explosive-laden vehicle and three immersing attacks targeted British and Swedish foundations and Afghan government institutes in the city of Jalalabad," IS said via its propaganda arm Amaq.

Jalalabad is the capital of Nangarhar province, on the border with Pakistan. The province has become a stronghold for the so-called "Islamic State" (IS) terror group.

The attack comes days after Taliban militants attacked the Hotel Intercontinental in the capital, Kabul, which killed at least 20 people, including 13 foreigners.

The violence against Save the Children, which has been working in Afghanistan since 1976, is the latest in a number of assaults on foreign aid groups in the country.

The International Committee of the Red Cross and Red Crescent announced in October it would "drastically" reduce its presence in the country after seven workers were killed last year.

The decision by the charity highlighted the growing dangers for aid employees, who have increasingly become casualties of a surge in militant violence in recent years.

At least 11 people have been killed and dozens more injured after a suicide bomber detonated near a group of policemen and protesters in Kabul. The terrorist "Islamic State" (IS) group has claimed responsibility. (04.01.2018)

Pakistan has given millions of Afghan refugees in the country until the end of this month to return to their homeland. But refugees say the short deadline and no prospects for the future make their return difficult. (16.01.2018)

Nineteen Afghans have been deported from Germany despite continued violence in Afghanistan. Protesters gathered at Düsseldorf airport to highlight that Afghanistan is not safe. (24.01.2018)