Pakistan′s internal tensions run high despite Nawaz Sharif′s removal | Asia | An in-depth look at news from across the continent | DW | 06.10.2017

For Pakistan, breaking away from the US and getting closer to China come with a price. The Islamic country's powerful army wants to spearhead new regional alignments, but ousted PM Nawaz Sharif is trying to resist. 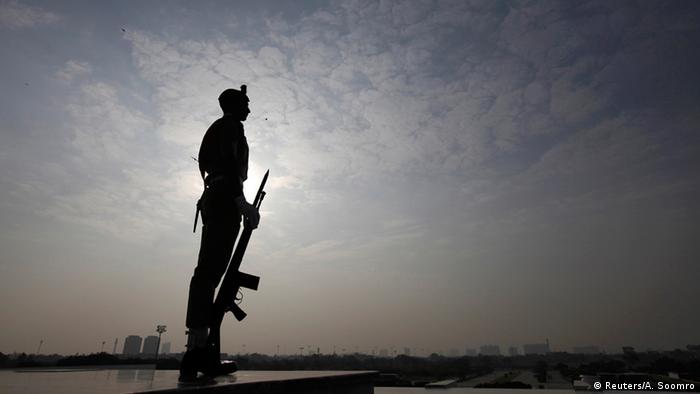 Pakistan is going through an unusual period in its 70-year history. There has been unprecedented US pressure on the country's military establishment to give up its alleged support to Islamist militants in Afghanistan. General Joseph Dunford, chairman of the US Joint Chiefs of Staff, recently alleged that Pakistan's Inter-Services Intelligence (ISI) maintained links with terrorist groups. On Tuesday, US Defense Secretary Jim Mattis told a Senate Armed Service Committee hearing that the US was willing to work with Pakistan "one more time" in Afghanistan - the last time, in other words.

It appears that President Donald Trump has a clear strategy for Pakistan. His administration has threatened to expand the sphere of drone attacks on militant groups inside Pakistan should Islamabad fail to comply with Washington's demands. Also, the US could put sanctions on Pakistani military officials and on the ISI as an institution.

But the Pakistani military, knowing it can rely on China's backing, is unperturbed about US threats. The $46-billion China-Pakistan Economic Corridor (CPEC) project has raised Beijing's stakes in the region. China's economic, military and strategic interests have increased manifold in Pakistan.

Pakistan's security establishment knows it can survive without US assistance as long as it continues to receive Chinese aid.

Many pro-democracy analysts in Pakistan believe that the military has been working on new geopolitical alignments in the region for some years. The security establishment may not be ready to comply with Washington's demands, they say.

Pakistan's security and foreign policies are undergoing a radical transformation. The military, the most powerful institution in Pakistan, wants to spearhead this policy shift and make sure everything goes smoothly. With former premier Nawaz Sharif ousted by the country's Supreme Court on corruption allegations, it is easier for army generals to run the show. But unexpectedly for the military, Sharif has refused to give up and has chosen to confront the army generals.

With Sharif resisting both the military and the judiciary, the clash of institutions in Pakistan is likely to further intensify in the coming days and weeks.

Former PM Sharif and Washington are on the same page over the issue of proxy jihadis in Afghanistan and India. In a report published by Pakistan's Dawn newspaper on October 7 last year, Pakistani journalist Cyril Almeida wrote about an increasing tension between the civilian and military leadership over how the country deals with Islamist terrorists.

"In a blunt, orchestrated and unprecedented warning, the civilian government has informed the military leadership of a growing international isolation of Pakistan and sought consensus on several key actions by the state," Almeida wrote, citing different sources. "The message: military-led intelligence agencies are not to interfere if law enforcement acts against militant groups that are banned or until now considered off-limits for civilian action," the journalist added.

The so-called "Dawn Leaks" showed that Sharif and the military establishment had different approaches on the issue of Islamist terrorism. Even after his ouster, Sharif has continued with the same line toward Islamist militants and India.

Sharif's aide and Pakistan's Foreign Minister Khawaja Asif recently caused a political storm in the country by suggesting that Islamist groups like the Jamaat-ud-Dawa and the Haqqani network have become a liability for authorities. Washington and New Delhi have repeatedly called for action against these groups.

Asif's statements prompted opposition politician Imran Khan to call the foreign minister an "enemy" of the country. The foreign minister's remarks are indeed a breakaway from Pakistan's allegedly pro-jihadi line. Asif, who is critical of the army's interference in politics, also told US media that Sharif was ousted for seeking better ties with Pakistan's regional rival, India.

Will there be a compromise?

Ali K. Chishti, a Karachi-based security analyst, is of the view that the Pakistani military would avoid taking a collision course with Washington as it is aware of the US' global power and influence. Chishti says Pakistani military officials are already trying to reach out to the Trump administration.

"The US cannot afford to cut off ties with Pakistan. It only wants its interests protected in Afghanistan; therefore it is trying to 'control' Pakistan. We recently saw that the Pakistani military has reached out to Kabul and Washington in an attempt to speed up the reconciliation process between the Afghan government and the Taliban," Chishti told DW.

Commenting on Pakistan's domestic politics, the analyst said that the military generals in Pakistan see the Sharif family as too powerful and want to cut it down to size. "Sharif's Muslim League party could be in power following next year's general election, but without the Sharifs," Chishti said.

Sharif was recently reinstated as his party's head after lawmakers in the lower house of parliament amended a bill that barred a disqualified politician from holding political office. But until cleared by the apex court in a corruption case, the former prime minister cannot hold public office.

Some analysts, including Chishti, think that Pakistan's ruling elite understands that a prolonged tug-of-war between the army and the Sharifs could be extremely dangerous for the country's unity because both groups have the Punjab province as their power base. A prolonged conflict among the two biggest stakeholders in Punjab - Pakistan's most powerful province, both economically and politically - could even lead to the disintegration of the state, they warn.

"With Sharif putting up a fight, and knowing that he is popular in the Punjab province, it looks like the military would eventually make a compromise with the Sharif family," Chishti said.