Ignoring US pressure, Pakistan mainstreams jihadi groups | Asia| An in-depth look at news from across the continent | DW | 29.09.2017

Military supporters in Pakistan are criticizing the foreign minister's comments against jihadi groups. At the same time, Islamist outfits are aiming for a greater political role in the country. Sattar Khan reports. 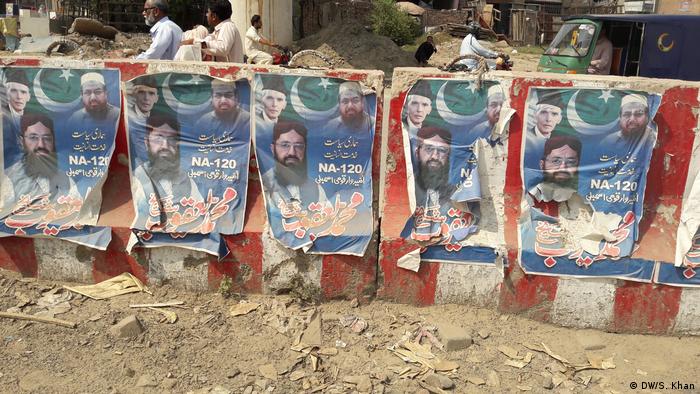 Pakistan's Foreign Minister Khawaja Asif has caused a political storm in his country by suggesting that Islamist groups like the Jamaat-ud-Dawa and the Haqqani Network have become a liability for authorities.

The foreign minister's remarks are indeed a breakaway from the Islamic country's allegedly pro-jihadi line. Asif, who is critical of the army's interference in politics, also told US media that Former Prime Minister Nawaz Sharif was ousted for seeking better ties with Pakistan's regional rival, India.

Asif's comments come at a time when US President Donald Trump is building pressure on Pakistan to take decisive action against militant groups that are based along the Afghan border. Washington believes that jihadi organizations sheltered by Pakistani authorities launch attacks from Pakistani tribal areas into Afghanistan. Islamabad denies these claims and says it is "sacrificing" enough in the battle against terrorists.

General Joseph Dunford, Chairman of the Joint Chiefs of Staff, said Tuesday the US would not be able to "attain our objectives" in Afghanistan without Pakistan changing its "behavior."

The rise of a new party

Some analysts say that not only is the Pakistani military establishment not taking action against militant groups, it is actually trying to bring jihadi groups into mainstream politics in order to weaken liberal political forces.

Pakistan's secular sections point to the recent creation of the Milli Muslim League (MML) party, which contested a by-election in the eastern city of Lahore earlier this month.

The MML is believed to be a political front of the Jamaat-ud-Dawa (JuD), an organization linked to the banned Lashkar-e-Taiba (LeT) group accused of carrying out the 2008 Mumbai attacks. JuD's head, Hafiz Saeed, has a US bounty on his head.

Pakistani liberal groups are alarmed by the fact that authorities, including the country's election commission, allowed the MML to participate in a by-election. The MML came third in the election after the ruling Muslim League-Nawaz group and Khan's Pakistan Tehreek-i-Insaf (PTI).

Tabish Qayyum, a spokesman for the MML, rejects claims that the military establishment is backing the newly formed party.

"The MML is an independent political party formed in accordance with the constitution of Pakistan and the 2002 Political Parties Act. It has no link or affiliation with any religious or political group," Qayyum told DW, adding that Saeed was not associated with the MML.

Ahsan Raza, a Lahore-based political analyst, is not ready to accept Qayyum's claims.

"The MML openly sought votes for Mohammad Yaqoob Shaikh, the party's candidate for Lahore's by-election, in the name of Hafiz Saeed. Shaikh could be seen on posters with the JuD leader," Raza told DW.

"The MML activists and supporters raised jihadi slogans during the Lahore election campaign. For them Ajmal Qasab, one of the Mumbai attackers, is a hero. The party is also using Jamia al Qadsia mosque, the JuD headquarter, as their office," Raza added.

Tauseef Ahmed, an ex-professor at an Islamabad-based university, told DW the creation of MML and its popularity pointed to the "mainstreaming of jihadi outfits" in Pakistan.

"The country's military establishment is dividing Pakistani society along religious and sectarian lines. This policy has harmed the country. The military generals do not realize that the international community is observing the situation. Hafiz Saeed was declared an international terrorist by the US and a number of other countries," Ahmed told DW.

"By mainstreaming such groups, Pakistan has put all its credibility at stake. Why should the international community accept our claims that we are fighting extremists?" Ahmed said.

Unfazed by criticism, the MML continues to expand its activities in the country. It plans to launch a membership drive that could attract thousands of people.

MML spokesperson Qayyum told DW his party would contest the 2018 general elections from all major constituencies in Pakistan as the good performance in the Lahore by-election proves the party could do well countrywide.

A Senate committee recently criticized the country's election commission for allowing the MML to take part in mainstream politics. But analyst Raza says as long as the powerful military favors the mainstreaming of jihadi groups, the lawmakers' criticism won't change the situation on the ground.

"Ansar ul Umma, an organization that dubs Osama bin Laden a Muslim hero, has also announced it will form a political party in Pakistan. Soon Taliban militants would be mainstreamed. This policy will have catastrophic consequences for the country and its political structure," Raza said.

Some experts say that bringing militant groups into mainstream politics is not a new phenomenon in the world. In South Asia, for instance, Nepal has seen Maoist rebels joining politics and playing an active role in governance. But the Pakistani case is different in the sense that extremist groups are continuing to raise jihadi slogans and many of them have not laid down arms – and they don't intend to.