US President Donald Trump warned against a "hasty withdrawal" from Afghanistan while announcing a new strategy for the war-torn country. However, he refused to provide details on the number of additional troops. 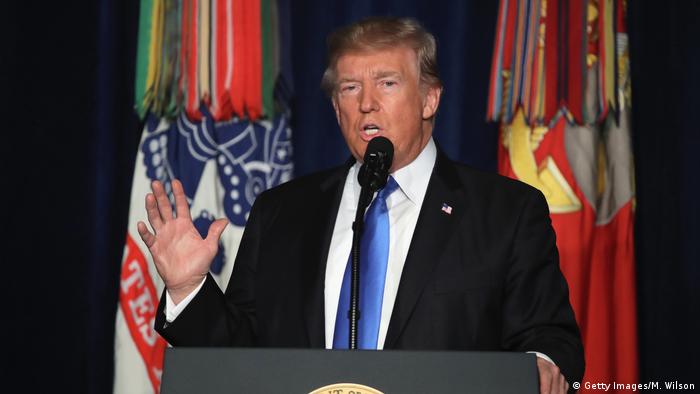 The American people are "weary of war without a victory," Trump said in a widely awaited speech on Afghanistan.

Addressing the nation live from Fort Myer in Arlington, Virginia, Trump said on Monday evening that his "original instinct" was to pull out of Afghanistan. However, a quick pullout from would lead to a "predictable and unacceptable" power vacuum, which would quickly be filled by terror groups, according to Trump.

"We cannot repeat the mistakes in Afghanistan that our leaders made in Iraq," Trump added.

Taliban may be included 'someday'

While the speech was aimed at announcing a new approach to Afghanistan, the US president refused to discuss a possible increase in US troop numbers or detail their strategy to break the Taliban offensive, saying that "America's enemies can never know our plans."

The AP news agency, citing White House talking points sent to Republican lawmakers, reported that decision would be left to Defense Secretary Jim Mattis and "based on his judgment."

Ahead of Trump's address, the US media reported that the Pentagon would send an additional 4,000 soldiers to reinforce the 8,400-strong contingent already in the war-torn country.

Trump said that the US would focus on results on the ground instead of relying on preconceived timetables to make military decisions. According to the US president, victory in Afghanistan will mean "attacking our enemies" and "obliterating" the so-called "Islamic State" (IS) group and al Qaeda, as well as preventing the Taliban from taking over the country.

At the same time, Trump also hinted at the possibility of including the Taliban in government.

"Someday, after an effective military effort, perhaps it will be possible to have a political sentiment that includes elements of the Taliban in Afghanistan," he said. "But nobody knows if or when that will ever happen," he added.

"Ultimately, it is up to the people of Afghanistan [...] to achieve a lasting peace."

Immediately after the speech, US Secretary of State Rex Tillerson said that the US was "ready to support peace talks between the Afghan governmen and the Taliban without preconditions."

"We are making clear to the Taliban that they will not win on the battlefield," the US top diplomat said. "The Taliban has a path to peace and political legitimacy through a negotiated political settlement to end the war."

"The whole speech was old," he told the AP news agency.

Previously, the Taliban said they were not ready for peace talks before the US gives a timeframe for withdrawing their forces.

Pakistan "has much to lose by continuing to harbor terrorists," Trump said. "No partnership can survive harboring of militants."

The US president also pledged to use a variety of diplomatic, military and economic tools to combat terrorism.

"One way or another, these problems will be solved - I am a problem-solver - and we are going to win," he said.

The Kabul government praised Trump's speech, saying that they hears "exactly what we needed to."

Afghan ambassador to the US Hamdullah Mohib praised Trump for "breaking the silence" about Pakistan and said Kabul was committed to continuing reforms which show it deserves US support.

The 'waste' of time and lives in Afghanistan

Afghanistan has so far cost the US thousands of lives and hundreds of billions in aid. While the US troops successfully toppled the Taliban regime in 2001, they were unable to destroy the jihadi movement and ween the anti-Taliban forces off their support.

The Taliban have made steady gains since the US withdrawal, and the pro-US regime in Kabul is currently controlling just over half of the country. The jihadis have also launched repeated attacks in the heart of the Afghani capital. The US currently has some 8,400 troops in the war-torn state, part of a NATO mission to support and train Afghanistan's own security forces in the 16-year-long war against the Taliban.

Even before his campaign, Trump described the Afghan war as a "waste" of lives and money. Later, he described the war as a "terrible mistake," but then went back on those comments.

Trump's former strategist, Steven Bannon, repeatedly called for withdrawal from Afghanistan and using private contractors to fight the Taliban. Trump removed Bannon from his post of White House chief strategist several days ago. It was not immediately clear how his removal would affect Trump's Afghan strategy, with the president's cabinet still stacked with active and retired military generals.

A possible surge of American troops is likely to provoke a backlash from Trump's voters, many of whom want to see the US disengage from conflicts overseas.