A former Nazi death camp guard's bid to suspend his sentence has been rejected by Germany's Constitutional Court. The 96-year-old will soon start his four-year prison term for his role in the murders of 300,000 people. 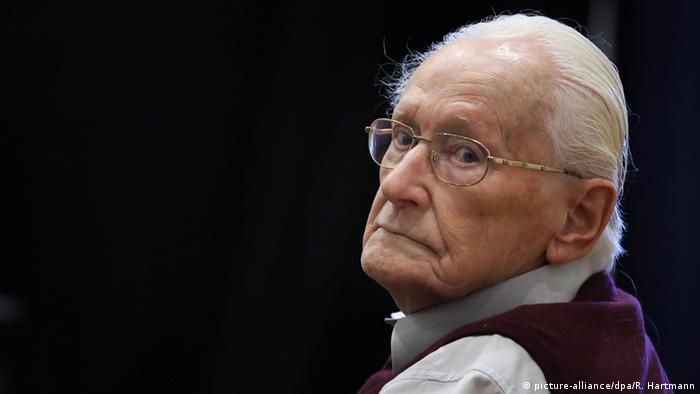 Germany's highest court denied an appeal on Friday from 96-year-old Oskar Gröning to suspend his prison sentence on health grounds.

Known as the "Bookkeeper of Auschwitz," Gröning was convicted of aiding and abetting the murder of 300,000 people at the Auschwitz concentration camp and sentenced to serve four years in prison.

The judges on Constitutional Court wrote in their decision that carrying out Gröning sentence "carried a special weight" considering the crimes he was convicted of.

Kathrin Söfker, a spokeswoman with the public prosecutor's office in Hanover, said that Gröning will now be called up on to start his sentence, saying: "That should happen soon."

Read more: Opinion — The Nazis' support staff are not without guilt

What was his role at Auschwitz: Gröning voluntarily joined the Nazi's elite Waffen-SS at the age of 21 and was stationed at Auschwitz in 1942. He was a bookkeeper who sorted and assessed money and valuables taken from prisoners before sending it back to his superiors in Berlin.

What did he say during his trial: The former SS guard told the court that he felt a "moral guilt" for serving at Auschwitz, but that he was not personally involved in mass murder. He was convicted by a court in Lüneburg in 2015.

One of the last cases: Gröning's case is one of the last criminal cases in Germany against a surviving member of the Nazi regime. Some 6 million Jews were murdered during the Holocaust carried out under Adolf Hitler, many of whom died in concentration camps including Auschwitz.

What happens next: It was unclear which legal options, if any, remain available to delay the sentence. Should no further legal action be taken, his 96-year-old client will begin his prison sentence.