Those who only worked as clerks at the Auschwitz death camp and claim to have been mere onlookers nonetheless served as accessories to the Holocaust, DW's Jens Thurau writes. 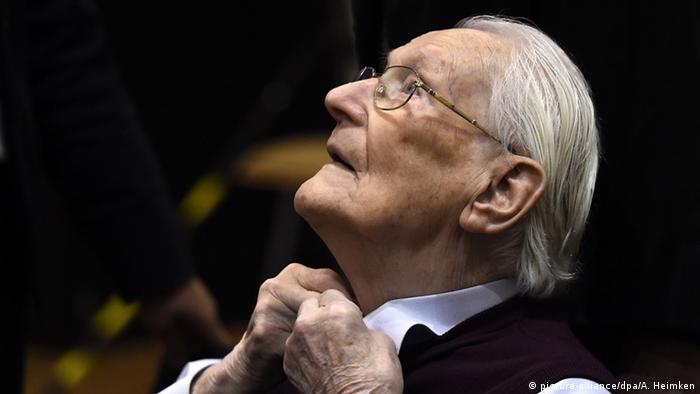 The 'bookkeeper of Auschwitz': Oskar Gröning, pictured here on July 15, 2015, in the Lüneburg courtroom

Oskar Gröning confessed to having sorted and assessed the valuables of Jews deported to the Auschwitz death camp. And he helped to oversee incoming prisoners. In other words, he didn't kill anyone. In spite of that, he was sentenced to four years in prison in July 2015 for aiding in the murder of 300,000 people. He was a part of a "machinery of death" that could not have functioned without a vast number of cogs. This point of view has now been adopted by the Federal Court of Justice - and that marks a watershed in German history.

Gröning is 95 years old. It is rather unlikely that he will be forced to go to prison. But that's not the point. The judiciary is rather late in judging what had been for years, even decades, determined by historiography and political debate: Many Germans had a hand in the mass murders at Auschwitz and other camps.

The idea that just a handful of fanatical Nazis were intent on killing while the majority of Germans watched helplessly and indifferently as the pandemonium unfolded is ahistorical. And, at a time of growing racism and nationalism, it is satisfying to see the judiciary establish a new, clearer view of Germany's past.

During the big Auschwitz trials of the 1960s, perpetrators escaped conviction simply because their direct involvement could not be proved. In any case, for a long time the social climate prevented people from acknowledging the involvement of their fellow Germans in Nazi crimes. Among others, the West German youth protesters of 1968 fought to change this - and eventually succeeded.

In recent years, courts have adhered to a new interpretation of the law: Accomplices are guilty, too. This was inspired by, among other things, documentaries featuring contemporary witnesses, by new academic research, by new books. And, of course, there are the memorial stones that can be found in many German cities - painful reminders that Jews had been an integral part of society until the Nazis took them to the death camps, and that it must have been impossible to be unaware of their deportation.

Those who are convicted today - like Oskar Gröning - are old men and will spend little time behind bars (if any time at all). But it is important to point out how many helping hands and heads were required to keep the machinery of death running. This insight is becoming more and more meaningful because the number of contemporary witnesses who can give their accounts of Nazi crimes is on the decline. And the judiciary has proved that it is not rigid and inflexible. Albeit belatedly, it is able to assimilate new perspectives.

Opinion: On trans rights, journalists must stand with the facts 12h ago