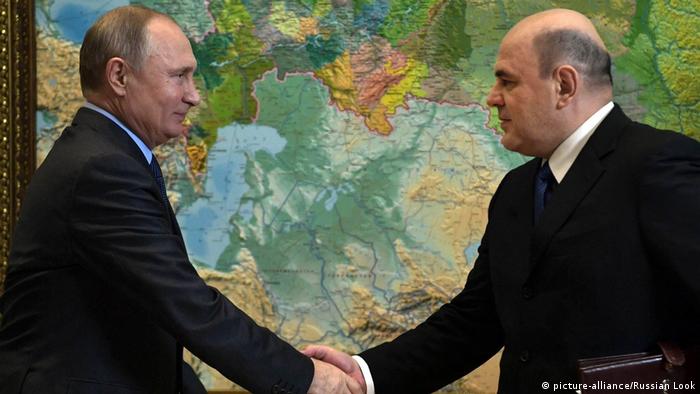 He is an amateur composer with two copyrighted hits to his credit. But Russia only learned this when Mikhail Mishustin was catapulted to political stardom last week. Vladimir Putin made him prime minister instead of his trusted No. 2 — and former president — Dmitry Medvedev. The 53-year-old was hardly a household name as head of Russia's tax service.

The line-up of new ministers Mishustin presented earlier this week consists mostly of figures as obscure as he was before the appointment. Apart from Foreign Minister Sergei Lavrov, Defense Minister Sergei Shoigu and possibly Finance Minister Anton Siluanov, they are largely unknown to Russians. The 27 men and three women are colorless, professional bureaucrats. For the last 20 years they have circulated through the revolving doors of ministries, government agencies and state-owned enterprises.

This is how Vladimir Putin usually likes his governments — staffed with "men without qualities."

But this cabinet is special: It is the first that will serve after the Russian constitution is amended in April. The amendments were drafted by a special committee that Putin appointed. They include an Olympic figure-skating champion, a nationalist novelist, a trade union boss, a Cossack elder and several lawmakers known for loyalty to Putin that is outstanding even by modern Russia's demanding sycophancy standards.

The amendments are designed to relieve the president of any responsibility for economic and social issues. They will transfer the power to confirm the prime minister (who the president will still propose) and approve cabinet members to the Duma, the lower house of parliament. It is staffed — and will continue to be staffed — by the yes-men of the United Russia party, plus the token (Kremlin-controlled) opposition, like the Communists or the ultra-nationalists of the inappropriately named Liberal Democratic Party.

The president will retain full control over foreign policy, the armed forces, the police and multiple security services. That Lavrov and Shoigu stayed on, as well as interior minister and police chief Vladmir Kolokoltsev, is a clear signal to the world: Neither the Kremlin's foreign and security policy will change, nor will its continued suppression of Putin's domestic critics.

Real disposable incomes continue to decline for a fifth consecutive year, economic growth is minuscule and social protest is gaining momentum. Thus, the faceless bureaucrats in Mishustin's government have an important task ahead of them: quelling growing social discontent. That means finding financial resources to fulfill Putin's pledges to dramatically improve education and health services, give more subsidies to families with children and generally reboot the sluggish economy.

Read more: Why Russian doctors are fed up with state-run hospitals

This will ensure that the constitutional amendments pass the popular vote without hindrance, and parliamentary elections in 2021 (or more likely 2020) proceed trouble-free. That, in turn, will set the stage for the most important part: Putin's transition from his presidency, which ends in 2024, to a new position of power in which he will continue to control the levers of government machinery. Russians protested against the changes to the constitution on Sunday

That new role will probably involve the State Council, until now a merely consultative body made up of the heads of Russia's regions. It is explicitly mentioned in Putin's changes to the Constitution, which give the council deliberately vague but wide powers over both foreign and domestic policies.

Most observers in Moscow agree that Putin is rushing through the amendments so he can leave the presidency before 2024, but no one knows why. The public won't find out what he has in mind, who he sees as his successor, or whether he will have a successor at all, until they are presented with a fait accompli, as is Putin's custom. Mishustin and his ministers are there to keep the electorate quiet as Putin deliberates on the future.

Among the new cabinet's appointees one newcomer stands out: Culture Minister Olga Lyubimova, 40, wears her Russian Orthodox faith on her sleeve and never shies away from controversy. She was in charge of cinematography under the previous minister. There she made a name for herself by denying Armando Ianucci's political tragicomedy "The Death of Stalin" a screening certificate after branding it anti-Russian. It's ironic that this new culture supremo will play a part in a real-life power transfer in an era that increasingly resembles Soviet times in its opaqueness and foreboding.

"The Death of Stalin," which hits theaters in Europe and North America this month, makes light of one of the 20th century's most brutal dictators. Banned in Russia, the film is likely to strike a chord abroad. (29.03.2018)