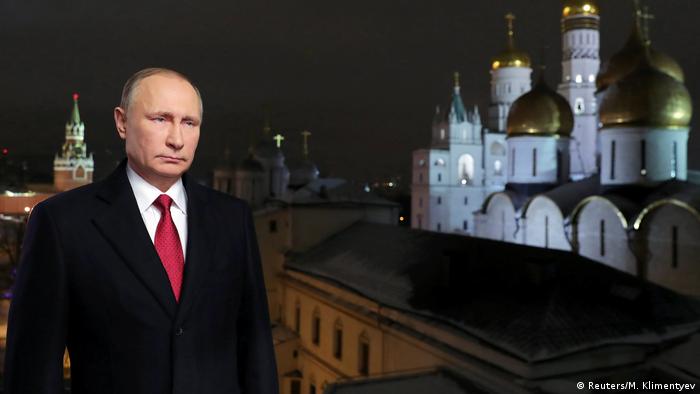 The turn of the last century was a big one for Russia. On New Year's Eve 1999, President Boris Yeltsin resigned with a surprising pick as his successor: the little-known former director of Russia's domestic security service, the FSB, was tapped to take over for the ailing Yeltsin, until elections in March 2000. Putin's New Year's speech followed Yeltsin's farewell.

"Dreams come true on New Year's Eve. Especially this New Year's Eve," Putin said on national television. He told his nation to raise a glass to "the new century." Few imagined just how influential Putin would be in the 20 years since. His popularity kept growing even if few knew what he really stood for. That left his promises to be judged more than his deeds.

Putin for a stronger state

"It's too early to write off Russia as a major power," Putin wrote before he assumed the presidency. He promised to bring Russia back to the world stage. He's done that, despite western sanctions and getting tossed out of the G8. Whether it's the conflict in Syria, Ukraine or Iran's nuclear program, Russia is the kingmaker.

Ahead of the election in 2000, Putin wrote voters with the promise to strengthen the Russian state, and renew its military and arms industry. A state's strength is more than its GDP, making power hard to measure. Yet there is broad global and domestic consensus that Russia is stronger than it was in 2000. That includes its modernized military, which is more effective than back then. From a purely military standpoint, it has had some successes: Georgia in 2008, the occupation of Crimea in 2014and its operations in Syria since 2015. Russia's rearmament has taken time and money — an estimated $315 billion (€284 billion).

Russia appears more stable today than it did during the two Chechen wars (1994-1996 and 1999-2009), when many people, including Putin, feared for Russia's territorial integrity as its regions dreamed publicly of independence amid the disintegration of the central state. At the same time, there has been a backpedaling of democratic norms during Putin's tenure. From a western viewpoint, there have been few changes of power at the local or federal level that could serve as a check on his power.

Russia's motto: 'Catch up with Portugal'

Memories of national bankruptcy in 1998 were fresh when Putin became president. Overnight, many Russians lost what little they had. Upon taking office, Putin promised to "raise the standard of living" and ensure "dynamic economic growth." Specifically, he estimated that Russia could reach Portugal's contemporary level of per capita GDP within 15 years, if it kept to 8% growth — or possibly even France's or the UK's level if it reached 10%.

That statement became a common catchphrase: to "catch up with Portugal." Sometimes it was meant ironically, but not always: Growth was about 7.1% between 1999 and 2007. The global financial crisis took its toll, but only briefly. Since 2000, Russian GDP has increased fivefold: from $300 billion in 2000 to $1.66 trillion today.

Per capita did almost reach Portugal's at one point: in 2013, $24,300 versus Portugal's $25,600, though things have gone less smoothly since. Russia never has quite caught up to Portugal, which Putin himself acknowledged in 1999 was not among the rich nations of the European Union. One widespread myth is that Russia's economic growth only faltered following its annexation of Crimea in 2014, and the resulting sanctions.

In reality, economic growth was already lackluster in 2013. Economists point to the country's economic model. Putin has repeatedly promised to transform the country from simply an exporter of raw materials to one more broadly based on high-tech products and services. Nevertheless, Russia remains just as dependent on raw materials as it did in 2000, if not slightly more so. The state budget is dependent on fluctuations in world market prices.

Demographics: Two steps forward, one back

Even more problematic than ailing state and economic structures is its demographics. When Putin assumed office, the Russian population was shrinking by nearly one million people per year. He saw this as a "danger to Russia's very existence," one that seemed impossible to reverse. But birthrates went up as economic conditions improved. Putin announced in 2011 that the demographic crisis had been subdued. Between 2013 and 2015, the population grew for the first time in the 21st century. Putin declared sustainable population growth a "national goal" in 2012. With that came longer life expectancy: from 65.5 years in 2000 to 73.6 years in 2019, according to Russia's health ministry.

Yet the population shrank again, and at a faster pace, in 2016. The number of deaths outpaced births in the first nine months of 2019 by more than a quarter million. It is the worst decline in 11 years, according to the state statistics agency, Rosstat.

Not for the first time this month, Russia's Vladimir Putin has criticized a recent European resolution assigning some blame to the Soviet Union in the outbreak of World War II. This time, he focused on eastern Europe. (24.12.2019)

Plato's ideals of what makes a good ruler have shaped Western intellectual history and our understanding of modern politics. But world leaders are increasingly turning their backs on these ideals, says Alexander Görlach. (09.08.2019)