After 20 years, is Vladimir Putin′s untouchable image crumbling? | Europe | News and current affairs from around the continent | DW | 09.08.2019

During Vladimir Putin's two decades in power, polls have often shown Russians blame their government rather than their president for their problems. Amidst a new wave of domestic tension, that could be changing.

What is Putin's appeal to Russians?

Vladimir Putin kicked off his reign at the top of Russian politics on August 9, 1999, when he took over as prime minister. At the time, the man who would ultimately become Boris Yeltsin's successor was a relatively unknown figure.

Now in his fourth term as president (with another stint as prime minister in between), Putin has long been viewed as politically untouchable — including when it comes to public opinion. "The czar is good, it's the nobility that is bad," is a Russian saying often cited to explain why the president's approval rating remains consistently higher than that of his government.

Even Putin himself has tried to debunk this myth of infallibility. "There is this eternal Russian idea that the czar is good and the boyars are bad. But I can tell you that if something isn't going well, that is everyone's fault," he said of Russia's wage gap at his annual press conference in December 2018. He also emphasized his own personal responsibility for Russia's domestic issues at his most recent call-in show in June.

Putin's statements seem prescient, as polls show his popularity may no longer be untouchable. At the end of his second term in 2008, approval ratings for the office of the president were 35 percentage points higher than they were for the government. Now the gap has shrunk to 23 percentage points, according to state pollster VTsIOM. VTsIOM surveys also show the level of trust in Putin has recently shrunk to a minimum of just over 30%, the lowest since records began in 2006. 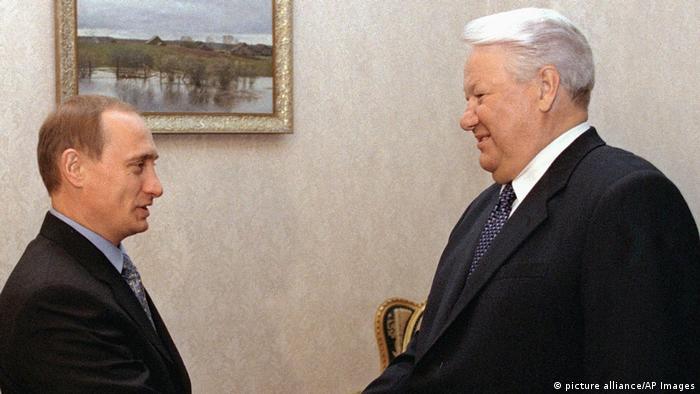 When Yeltsin tapped Putin to be his successor in 1999, he rapidly rose from political unknown to the most powerful man in Russia

'Russia as a superpower'

Traditionally, Putin's popularity has been associated with the restoration of Russia's sense of national pride. Putin came to power at the end of the 1990s, a tumultuous decade for the country. When the Soviet Union collapsed, it created huge economic chaos and social upheaval — and it left many people feeling they had lost their national identity.

According to Lev Gudkov, the director of the independent Levada Center polling organization, Putin's aim has been "to restore the image of Russia as a superpower, at least in the eyes of Russians, and restore the authority the Soviet Union had." His approval ratings were at an all-time high after the annexation of Crimea in 2014, for example. The move, while condemned in the West, was extremely popular among Russians.

Russia's pension reform was passed in the Duma in late September 2018 and Putin signed it into law in early October. The move sparked protests across the country. 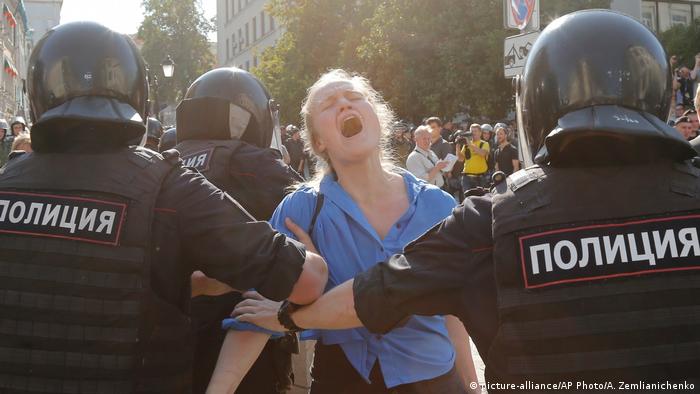 In recent months, there have been other reflections of growing public anger. There were protests against planned garbage dumps in northern Russia and in the Moscow region, as well as against accusations of election fraud in regional governor elections in the far east of the country. For the last month, people have been taking to the streets to push for the registration of independent candidates for upcoming Moscow city parliament elections.

Gudkov puts Putin's decreasing popularity down to a combination of factors. Economic stagnation and falling wages are the first issue, he said. "The second factor is a growing sense of injustice, corruption, a sense that the upper echelons of power are stealing from people."

"There is a sense of the government's moral decay," Gudkov explained. "And any hope that Putin could deal with that corruption and start paying more attention to social policy aimed at satisfying the demands of the people is dissolving."

Political scientist Alexey Kurtov believes Putin's increased public accountability these "points of tension" in Russian society are in part due to the fact that they are more widely covered by the media. Before, "Putin could decide not to react to certain issues or assign responsibility for them to someone else," he said. "Now, because there are quite a lot of tense issues and there is no one who can be held responsible for them all, responsibility for those problems is automatically transferred to Putin." 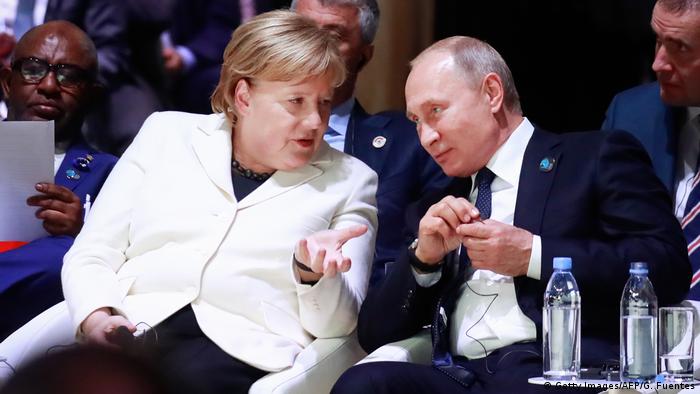 Putin has long relied on his foreign policy prowess to stay above the domestic political fray, but that could be changing

Valery Fyodorov, the director of state pollster VTsIOM, agrees that the main cause of public dissatisfaction is economic, citing health care and a desire for better wages. However, Fyodorov argues the drop in trust for Putin isn't significant. He also believes that the division that people traditionally make between the president and the government is a simplification. "Putin is politician No. 1," he says. "Putin is responsible for the country. Everyone knows that."

Fyodorov argues that Putin's politics have already taken on a new socioeconomic twist. His "National Goals," signed into law just after he started his latest presidential term in May 2018, pledge to improve living standards and breathe life into Russia's stagnant economy.

What is Putin's appeal to Russians?