Moscow residents fight back against ′second Chernobyl′ | Europe | News and current affairs from around the continent | DW | 23.07.2019

Plans for a new highway through Russia's capital have sparked protests. Locals say the project could cut straight through a nuclear waste site, sending radioactive dust into the air and into Moscow's river. 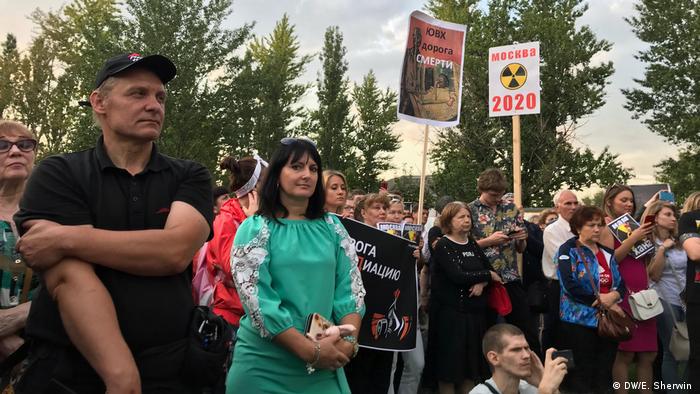 Their signs read "We want to live!" and "Road to Death," and many bear the bright yellow symbol warning of radiation. On Monday, several hundred protesters gathered in the south of Moscow outside residential housing blocks that overlook a nuclear waste site.

The site is located between the Moskva river and the popular Kolomenskoe park. It stretches for around 500 meters along sloping river banks and contains tens of thousands of tons of radioactive waste from Moscow's nearby Polymetals Factory. The plant used to extract thorium and uranium from ore and now produces weapons and military equipment.

Demonstrators of all ages have gathered here to protest against an eight-lane road that they believe will cut through the contaminated soil. Activists are making speeches and collecting signatures against the project. "We want to live," is how one young man explains his attendance at the rally.

Local resident Anna, who prefers for DW not to print her last name, points to the windows of her apartment in one of the high-rises above. The quiet 30-year-old with blond hair and a pierced lower lip explains that she grew up in the building. "Everyone knew about it," she says of the radioactive waste site just across the railway tracks. "When I was little my parents told me not to go there."

She says when she found out about city authorities' plans to build a highway here in March, her first reaction was: "The government has gone crazy." Since then she has protested against the construction project several times, the first demonstrations she has attended as an adult. 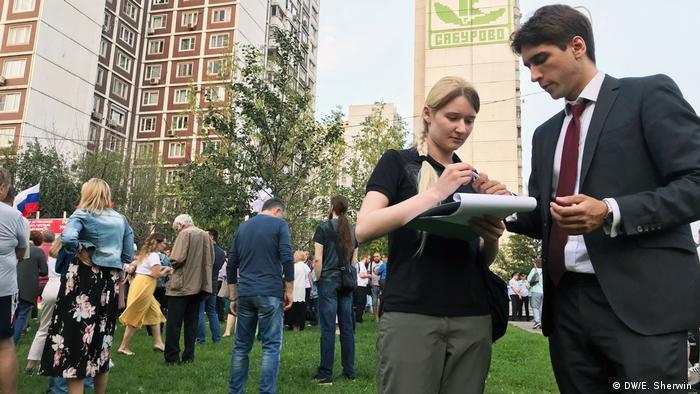 The planned highway was announced last November and construction is currently slated to begin at the end of the year. In a city plagued by traffic jams, authorities say the highway will unclog some of Moscow's busiest roads.

One of the speakers at the rally is Andrei Ozharovsky, a nuclear physicist who has become the radiation expert consulting the activists. Ozharovsky is a radioactive waste safety specialist. He has been taking journalists and local residents on tours of the nuclear waste site.

Just a short walk away from the demonstration, he leads DW through a forest on the radioactive heap, which he says has presumably been here since the 1940s or 1905s, when there was much more of a slapdash attitude towards nuclear safety. At the time, this spot wasn't yet part of the city of Moscow — but bit by bit, the capital expanded. Ozharovsky notes that it is only one of many contaminated sites in the city.

"No one knows how many there are," he says, explaining that Russia's atomic energy agency, Rosatom, is still highly secretive. 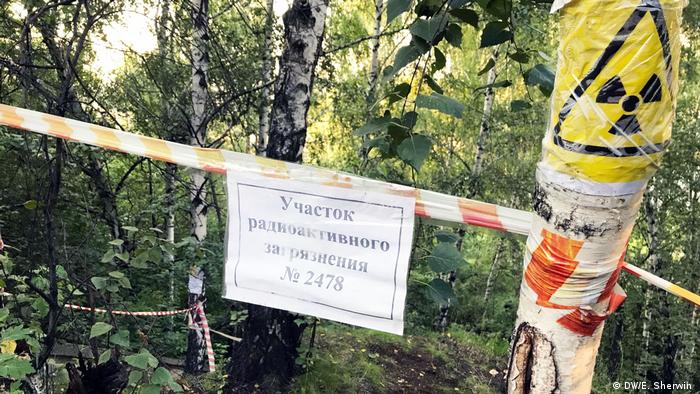 At a forest in Moscow, signs warn of 'radioactive contamination'

Ozharovsky rushes around the site with a radiation detector, periodically ducking under tape marking off areas with the words "Beware — Radiation!" to take measurements. One taken in a hole in the ground shows 7 microsieverts per hour, over double the permissible norm officials cite as 2.7 microsieverts per hour. Ozharovsky says that in April specialists from the Ministry of Emergency Situations and the government agency Radon measured a rate 25 times higher than the norm.

Radon, which is in charge of radioactive waste cleanup, has been removing some of the contaminated soil from the site every year. But in a company publication from 2006, Radon Chief Engineer for Moscow Alexander Barionov explains that the work is merely "a kind of therapy."

"Full decontamination with the removal of all radioactive waste" would be too expensive, he says, adding that the hilly location of the site would make a full clean-up tough. "One incautious step, and radioactive soil gets into the river." 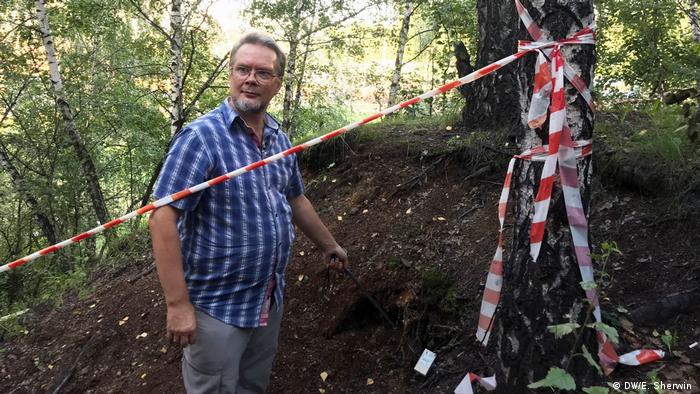 But Ozharovsky insists that the problem is not the radiation per se. It would be enough to simply keep people out of the contaminated area to prevent external radiation, since the contaminated soil is currently mostly covered and contained with clay, he says. Just this weekend, city authorities fenced off part of the territory, perhaps in response to activist demands.

Ozharovsky says the real problem is the planned building work. He is also concerned about soil slipping into the river and warns that construction could create radioactive dust. This could get into people's lungs and create "internal radiation," which is much more damaging, Ozharovsky explains. "The worst case scenario is that they will simply start construction and they will start moving the soil without taking into account that it is contaminated."

The Moscow committee on architecture and urban planning, however, is insisting that construction wouldn't touch the contaminated areas. And authorities so far seem to be pushing forward with construction plans. Last week, the director of the city's division for road and bridge building, Vassily Desyatkov, told journalists that analysis of the area showed radiation that is within "permissible limits." 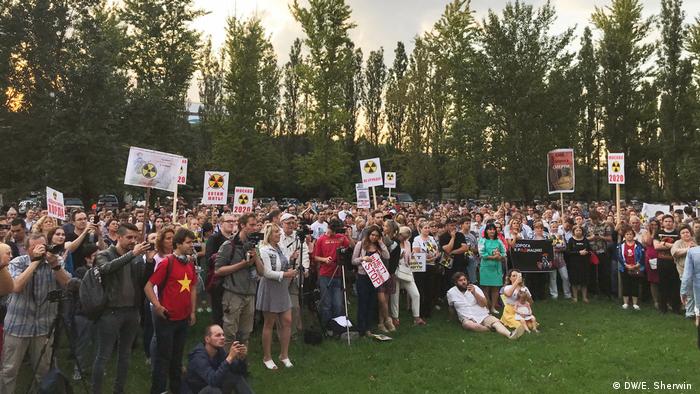 Signs at the protest warn of a 'second Chernobyl,' referring to a tragic nuclear accident in the Soviet Union

For local resident Anna, the planned highway shows that city authorities simply don't care about the people who live here. "I don't know whose interests are driving them but they are in no way considering our interests. They are simply creating a risk to our lives and our health," she says.

Many of the protesters at the rally against the highway seem to agree and accuse the government of lying. "When you can't trust the government, of course that is scary. You want to be able to sleep at night," one woman tells DW. "But you never know: Something could collapse tomorrow, or explode because of the government sloppiness, their disregard of people's health," she says, most likely referring to the collapse of an apartment building after a gas explosion last year in the city of Magnitogorsk.

The protest is typical of the growing public discontent in Russia. The crowds shout out about other worries during the speeches, including the unpopular pension reform, the rising price of housing utility bills and the prospect of a huge garbage dump in northern Russia. Living standards and real wages have been consistently falling in Russia and that seems to be eating away at the government's popularity. Surveys released by state pollster VTsIOM earlier this month showed the ruling United Russia party had 32.3% support, the lowest rate since surveys began in 2006.

Protesters in Moscow, including Anna, are determined to draw the line at nuclear waste, however. "I am ready to fight until the end. Because this is really scary," she tells DW. "No one wants to be sick, or die or for their children to be in danger. And we have nowhere else to go. So we will fight."