Russians rally for independent candidates to stand in elections | Europe | News and current affairs from around the continent | DW | 20.07.2019

Thousands of people have turned out in Moscow to protest the non-registration of independent candidates for local elections. This issue is one of the rare cases that has united Russia's usually divided opposition. 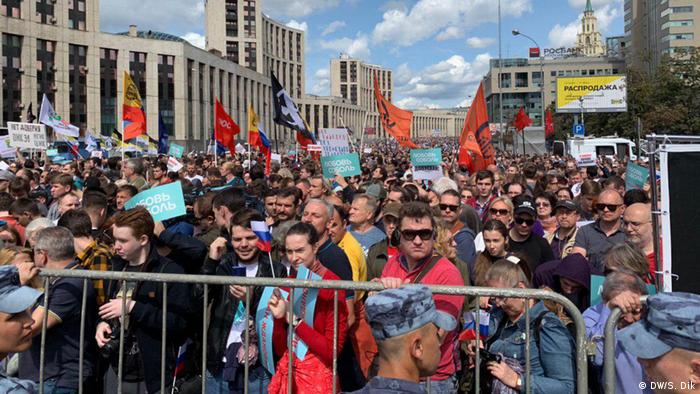 Thousands of people turned out in Moscow on Saturday to support the right of opposition candidates to be allowed to take part in elections to Moscow's city legislature, which are set to take place on September 8. The protest in the center of the Russian capital was organized by the country's Libertarian Party and had been authorized. The independent monitor "White counter" said 22,500 people attended the rally, while police put the figure at 12,000.

Protesters in the crowd chanted "Let them run!," "This is our city!" and "For free elections!" 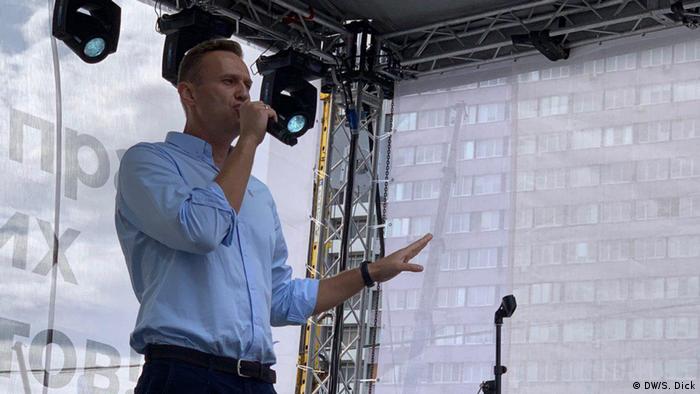 Opposition politician Alexei Navalny was present, shaking protesters' hands and talking to the candidates who weren't registered. This issue is one of the rare ones to unite Russia’s usually divided opposition.

Navalny made this point as he addressed the crowds: "Usually it is my exclusive right" not to be registered for elections, he joked, referring to the 2018 presidential elections in which he was not allowed to run. "But this has united us."

Navalny told journalists the mayor's office in Moscow would not be able to ignore such a huge crowd. He also insisted authorities could not ignore the huge number of people who planned to vote for independent candidates and had added their names to the signature lists the candidates need to collect to be registered.

Responding to a question from DW, Navalny insisted, "People in Russia don't understand how little support there is for the ruling party United Russia. Actually there is no support for them."

At the end of the rally, the independent candidates attending took to the stage together. They told protesters that if the authorities didn't register them by next Saturday, they would protest again in a week outside the Moscow mayor's office. In response to this idea, the demonstrators cheered. 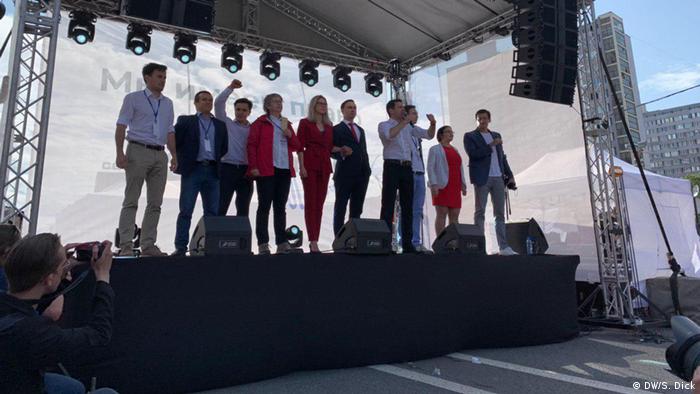 Opposition candidates took to the stage together

One of the organizers of the demonstration, Libertarian Party politician Mikhail Svetov, told DW that he hoped the large turnout for the rally would encourage the authorities to decide to register the candidates. And if not, he said, the people here would be angry and politicized: "People have to get angry, so that they start fighting."

A young man at the rally told DW: "We want to be heard. It is important to fight against the government's methods. Otherwise there eventually just won't be elections anymore."

Earlier this week, city authorities officially announced they had refused to register nearly 30 candidates for the elections, including prominent critics of the Kremlin. The most well-known opposition figures include former Duma representative Dmitry Gudkov, Lyubov Sobol — an ally of Navalny, Russia's most prominent opposition leader — and Ilya Yashin, who is currently a local Moscow councilor and the most popular candidate in his district, according to polls.

A woman at Saturday's rally holding a sign in support of Zashin told DW: "I am a law-abiding citizen but there are limits. I will protest until the authorities at the very least recognize my signature as valid. I signed for one of the candidates and the authorities have decided my signature isn't valid."

Making a point through the rally

Last week, Kremlin spokesman Dmitry Peskov dismissed the accusations, saying that any complaints should be taken to court.

An older couple at the rally told DW: "We are here because we have four children and four grandchildren and we want them to have a future. And we want to be able to choose what that future is."

Speaking to DW ahead of the protest, Gudkov accused the authorities of purposely invalidating the signatures he had collected. The authorities, he argued, "don't like me because I could win, just like the other independent candidates could as well."

Gudkov pointed out that if all the independent candidates won, and if they were joined by a few candidates from other parliamentary opposition parties, the opposition could have a majority in Moscow's parliament. The government "got really scared, so they were just thuggish and shameless and decided not to let us run," he said.

Opposition candidates and their supporters have been protesting for the right to take part in the election since last Sunday, with people gathering every evening on a square in central Moscow. Russian officials refused to register the candidates early last week, with the final list published on Wednesday. But nightly protests have continued, and Gudkov is convinced that they are creating a problem for the government by calling attention to the actions of the authorities.

Gudkov sees the authorities' action as an insult to democracy, a blow to the "citizens of Moscow" who gave the candidates their signatures. "With every protest, the risk to the authorities and the damage to their reputation grows. And they will have to start weighing up what is scarier: letting the opposition run or risking the people of Moscow hating them forever."

Not just a regional vote

Around 7 million Muscovites are eligible to elect 45 lawmakers to the city's parliament, currently dominated by the ruling United Russia party, which is loyal to President Vladimir Putin. Though the parliament is limited in its political powers, this regional race has national importance for Russia, which is highly centralized.

As political analyst Ilya Graschenkov pointed out, nearly 10% of the Russian population lives in the city of over 12 million, and "elections in the capital create political trends."

"A victory in Moscow will have an effect on other regions, and it will convert into votes in federal elections later," he said. 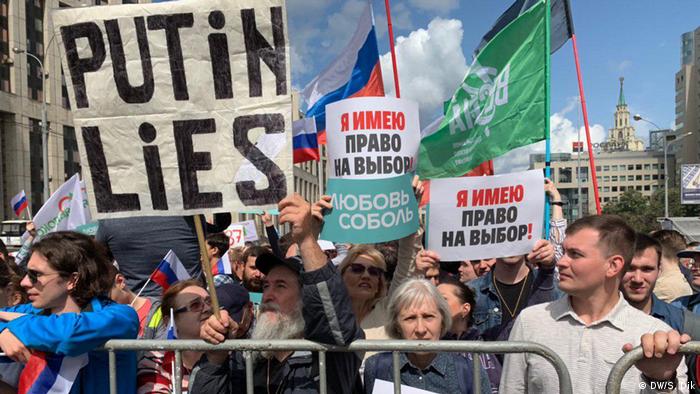 The messages at the rally were direct, and multi-lingual

By running in the Moscow election, the opposition candidates had hoped to capitalize on growing discontent in Russia. Living standards and real wages have consistently dropped, and the government recently passed an unpopular pension reform and increased value-added tax. This dissatisfaction has eaten away at support for the ruling United Russia party: Surveys released by state pollster VTsIOM earlier this month showed the party with 32.3% support, the lowest rate since surveys began in 2006.

That could explain why not a single candidate will be running on a United Russia ballot in the upcoming vote. Instead, the ruling party's politicians are running as independents. Political analyst Graschenkov said that refusing to register the competition was not a smart strategy for the government.

"This is once again pushing people out onto the streets and pulling people who are usually apolitical into politics," he said, predicting the protests could last at least until the vote in September. After that, people's "dissatisfaction with the actions of the Russian government will take on some other shape," he said.

For now, it certainly doesn't seem as if candidates or their supporters are willing to give up.

Gudkov told DW he is willing to take the case all the way to court.

"We will fight to be registered. If they register us we will win, we will do everything to win," he said. Referring to the United Russia candidates, he says "we won't just hand them victory on a platter."

When Russia annexed Crimea in 2014, Vladimir Putin's approval ratings shot up. Five years later, this euphoria has given way to disillusionment and presented society with a real dilemma. (16.03.2019)