In 1993, a constitutional crisis threatened to topple Russia's government. With Western support, President Boris Yeltsin deployed the army against his own parliament in a move that forever altered Kremlin politics. 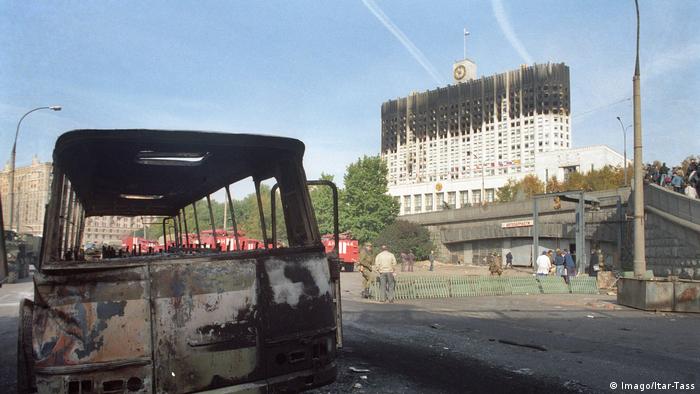 Russia's current seat of government on the banks of the Moskva River, popularly known as the White House, has twice been the scene of dramatic events in the country's more recent history. In August 1991, as the chambers of the highest legislative body, the Supreme Soviet, it was the stronghold of resistance to a coup from communist hard-liners. Newly elected President Boris Yeltsin climbed into a tank — with the media on hand — and presented himself as a defender of democracy. The coup failed, with little bloodshed.

Two years later, the White House again found itself at the center of a resistance movement — this time against Yeltsin. A power struggle that pitted the president against the Supreme Soviet and the Congress of People's Deputies culminated with Yeltsin firing on his opponents in October 1993. The effects of that constitutional crisis continue to shape Russia today.

After the collapse of the Soviet Union, Yeltsin sought to rapidly reform Russia politically and economically. However, deep divisions within society ultimately helped to stall those efforts, and broad segments of society fell into poverty.

Against this backdrop, the Supreme Soviet and the Congress of People's Deputies, which together acted as Parliament, opposed Yeltsin and blocked his policies with increasing frequency. Many of the president's critics were communists and hard-line nationalists, prompting the media to refer to the crisis as "red-brown revenge," for the colors of the respective movements.

On September 21, 1993, Yeltsin dissolved both legislative bodies, overstepping his authority. The Supreme Soviet and the Congress of People's Deputies reacted by voting to remove him from office. The tension over this de facto dual power structure escalated on October 3, when armed opponents of the president stormed the Moscow mayor's office and the television station Ostankino.

Yeltsin deployed the army, attacking the White House on October 4. Tanks fired short-range shots in broad daylight, setting the building ablaze. Images of the charred facade spread around the world. In total, more than 100 people died. Yeltsin prevailed and, in December 1993, held a referendum on a new constitution that consolidated and strengthened his authority. This new power structure centered around the president is enjoyed to this day by Yeltsin's successor at the Kremlin, Vladimir Putin. 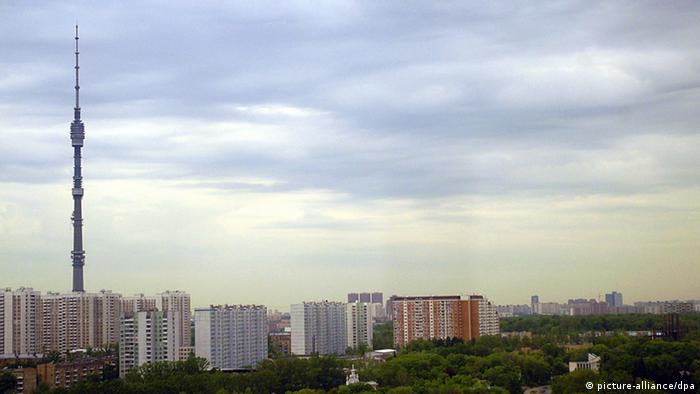 The birth of 'guided democracy'

As the events unfolded, observers speculated whether Yeltsin's violent actions were the death-knell of Russian democracy or simply a necessary evil. Twenty-five years later, Hans-Henning Schröder, a former expert on Russia at the Berlin-based German Institute for International and Security Affairs, has by and large maintained the assessment he made at the time.

"It was a conflict between two constitutional bodies, both of which were legitimated by elections," he told DW, calling the conflict "almost inevitable." After Yeltsin's opponents employed armed resistance, "the use of force by the state seemed the clear option."

Schröder considers December 12, 1993, the day the new constitution was voted in, as "the birthdate of a 'guided democracy' in Russia." The term refers to a form of government that seems democratic, but where elections and votes do not truly change public policy. Yeltsin wanted a constitution in which the president was untouchable. It could have been "the opportunity to craft a constitution in which Parliament plays a major role," said Schröder, but that opportunity was not taken.

The West sided with Yeltsin in 1993. "It was an important phase in the ongoing struggle between a vision of Russia that was very conservative, seeking a kind of continuation of the Soviet Union, with top-down rule and strong security forces such as the KGB and the FSB," said Andrew Wood, the British ambassador to Russia from 1995 to 2000 who now serves as an expert at the Chatham House think tank in London. "We in the West worried at the time about the rise of a red-brown coalition of various conservative forces with an additional nationalist tinge," he said, noting that Yeltsin was considered "the better hope" in the West.

But did the West make a mistake by being too uncritical with Yeltsin's power move in 1993? "In retrospect, I would say yes, however it didn't have to do with a real parliament," said Wood. 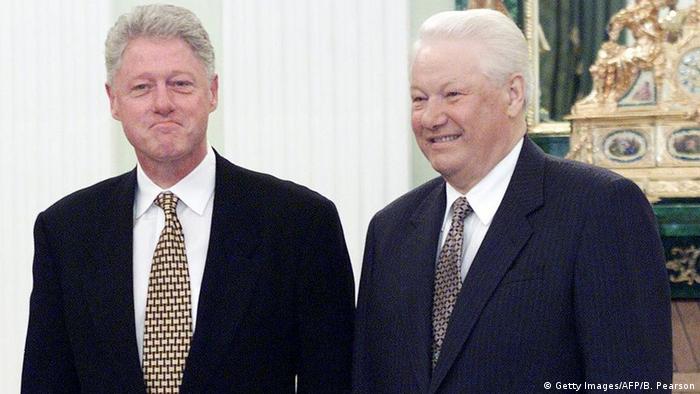 Schröder takes a similar view. "At that time there was a very uncritical attitude to the whole process in the West," he said. "It was assumed that Yeltsin represents democracy and everything that benefits Yeltsin benefits democracy too." But Yeltsin's actions had "damaged the credibility of the democrats as reformers," Schröder explained."

Greetings from the past

In today's Russia, a violent conflict between the president and his parliament seems impossible — if only because the president holds all the power. Nevertheless, Wood sees some "analogies" between 1993 and 2018. "As a Russian, you are worried about the future. You do not see how the Putin-led system can develop in a stable and constructive way. You think you're in a trap," he said. "For Westerners, Putin might be seen as a necessary source of stability, an answer to Russian ways and traditions."

Wood admits that today's Russia is reminiscent of the leadership that caused so much fear in 1993: a conservative, nationalist system of power. The liberal independent Moscow newspaper Novaya Gazeta has identified another similarity. In Russia's recent gubernatorial elections, communist and right-wing populist candidates scored victories in several regions, positioning themselves as opponents of the Kremlin. But unlike in 1993, according to Novaya Gazeta, Russians have no fear of "red-brown forces," not even among liberal circles.