Moscow authorities arrested more than 800 people for participating in an unauthorized rally. But some residents said they "had no option left but to protest" in the face of a growing crackdown on independent candidates. 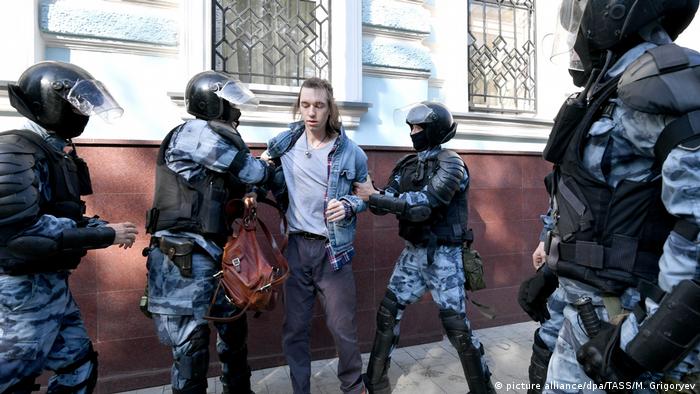 The German Foreign Ministry on Sunday urged Russia to immediately release protesters detained during a Moscow rally against the exclusion of independent candidates from city elections.

"The arrests are not in proportion to the peaceful charter of the protests, which were directed against the exclusion of candidates," the Foreign Ministry said.

Russian authorities on Saturday arrested more than 800 people for participating in unauthorized protests in a violent crackdown, according to an independent monitor.

"The repeated interference with the guaranteed right of peaceful assembly and freedom of expression violates Russia's international obligations and strongly questions the right to free and fair elections."

''No option left but to protest'

Although the electoral commission has yet to unveil the candidate list for city council elections, it said a vast majority of sponsored candidates had failed to gather the required number of signatories to participate in the electoral process.

"I had no option left but to protest," said a 61-year-old protester, who decried the exclusion of independent candidates.

In its 2018 Democracy Index, the Economist Intelligence Unit classified Russia as an "authoritarian" country, ranking it 144 out of 168 countries, below both Cuba and Afghanistan.

Read more: 'There is no pro-Putin majority' in Russia