Opinion: The Kremlin fears its own people

Russian police reacted with force and arrested more than 1,000 people during opposition protests in Moscow. As the nervousness of Russia's rulers increases, so does the courage of its opposition, writes Mirodrag Soric. 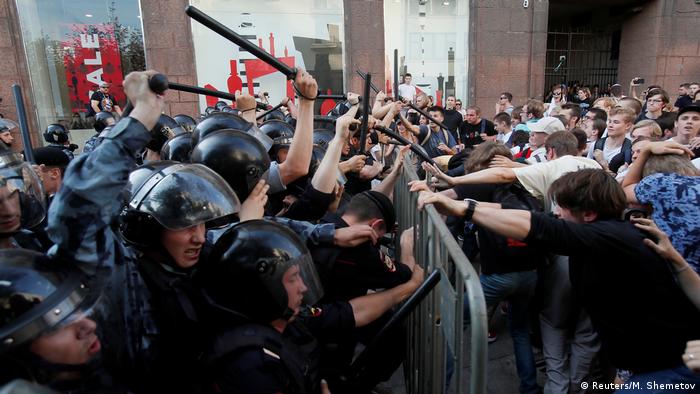 Victories give you strength. And during the clashes between state forces and the opposition in Moscow, it's the latter which emerged as the moral victors.

Who, after all, could possibly defend the actions of a police officer taking a baton to a woman already beaten to the ground simply because she dared to voice her desire for free and democratic elections?

Who on earth would applaud secret service operatives carting away youths who they had beaten bloody, because they exercised their right to demonstrate?

Who could take the side of masked state operatives setting their viciously trained dogs upon protesters?

Miodrag Soric is a chief correspondent, and formerly reported from DW's Moscow bureau

All the sympathy is on the side of the protesters, with no exceptions. The images of violence wielded mercilessly by Kremlin-backed thugs are repugnant. They reveal a Russia where power trumps justice. In a democracy, it's the other way around.

Read more:  Russia's Alexei Navalny may have been poisoned — doctor

Millions have now seen the images of the beaten demonstrators; they have caused outrage, in Russia and across the globe. Western companies that continue to invest in Russia — including Siemens, BASF subsidiary Wintershall and Daimler — need to take a good hard look at themselves. Anyone supporting Putin's regime in Russia will soon have to defend that stance closer to home.

But what brought things to such a head in Russia? Elections for Moscow's city parliament, set for September 8, set off the protests.

This in itself is surprising, as in reality this political body has little influence and few decisions are made there.

Due to its relative insignificance, hardly anyone — not even voters — have been particularly interested in this election's outcome in the past.

But this time, dozens of opposition candidates wanted to run, only to be hindered by the Kremlin with often very dubious reasoning. That sparked the protests.

But if the government is so brazen in flexing its muscles in a relatively inconsequential election, what will happen when its power is really questioned: in parliamentary elections for representatives to the Duma, or at presidential elections?

Russian President Vladimir Putin and the elite surrounding him are ever more fearful of their people. And with good reason. The government is accountable for a worsening in the Russian standard of living in recent years. The economy is stagnating, infrastructure is crumbling outside the major cities and educated young people are leaving Russia in search of better prospects. And ever since the so-called pension reform, millions of older voters also feel betrayed by the state.

Putin has been promising improvement to his compatriots for years, but hardly any believe him any more. Voters are threatening to abandon the government.

That's why political opponents are being frozen out of the vote. That's why the media is being controlled, and why independent journalists are being persecuted. The Kremlin fears protests like the devil fears holy water; it's a typical reflex of the powerful in authoritarian states.

For now, the ruling elite are holding on. But they're increasingly fearful of losing both the reins, and their free ride.

They're now being challenged by opposition politicians who seem to have lost all fear, who are willing to sacrifice their careers, their freedom or even their safety and that of their supporters.

But the opposition gains the most authority and legitimacy of all when the state responds with such violence — as it did at the weekend.

Historian Martin Aust sat down with DW to discuss Russia's imperial heritage and the annexation of Crimea. He also offered predictions about life in the country if and when President Vladimir Putin ultimately steps down. (12.06.2019)

Thousands of people have turned out in Moscow to protest the non-registration of independent candidates for local elections. This issue is one of the rare cases that has united Russia's usually divided opposition. (20.07.2019)

UK heads to polls in array of elections, including key Scotland vote 1h ago

DRC: Is President Tshisekedi's 'state of siege' a cover-up? 5h ago

Opinion: Trump's Facebook ban could have global impact 8h ago