In August, Muscovites elect a new regional parliament. But protests have ensued because 19 opposition candidates have been barred from running. Dmitry Gudkov is one of them. He spoke to DW about the challenges he faces. 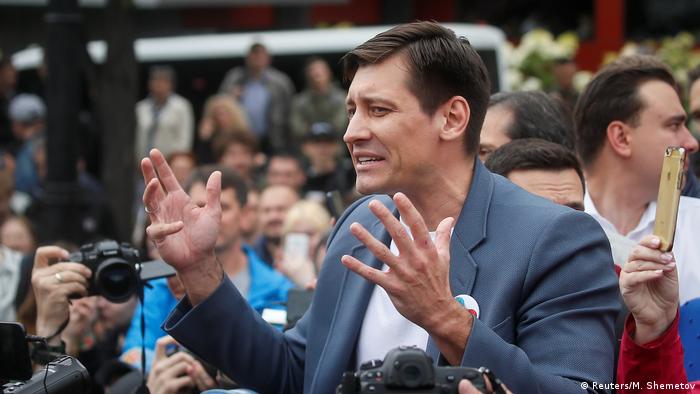 DW: In 2016 you were the only anti-Kremlin MP in the Russian parliament. Now, you want your Party of Changes to enter Moscow City Duma. But you are barred from running, just like 18 other independent candidates. Why does the electoral commission oppose you?

Dmitry Gudkov: They oppose me winning. Just like the other candidates. We had already completed half our election campaign. To win one of the electoral districts, I would need 12,000 votes. And I already had 7,500 voters who officially backed me. So I already had 60% of the necessary votes to win. The Moscow City Duma has 45 seats. With a coordinated election campaign, we the 19 independent candidates could have won seats in the legislature. If you add seven or eight candidates of the so-called system opposition, it would mean we could have commanded a majority.

So it was only logical that the authorities took this step? Presumably, you weren't surprised?

Exactly. Otherwise, they would have lost power. And the Moscow City Duma would have become a genuinely democratic parliament in charge of allocating 2,6 trillion rubles (€37 billion, $41.3 billion) ). It is a lot of money that is usually siphoned off in this city. So the authorities got scared and brazenly banned us from running.

Out of the blue, a police graphologist claimed that 499 of our supporters' signatures were forged. And suddenly absurd errors popped up in the database of our potential voters, where voters with male names had their gender down as female.

But that would be such an obvious case of manipulation that anyone would find hard to believe. If this really happened, what were the authorities' motives?

They adhere to the principle that has been established since the 1990s: namely that the people will believe anything. The authorities thought Muscovites would actually buy this.

But you do not and have started organizing protests. more than 10,000 people took to the streets when they learned you were banned from running. What, exactly, do you wish to accomplish?

We are doing everything we can. First, we will submit objections and complaints to the commission and courts. But people are also taking to the streets. I mean, imagine what it is like for them! Each one of us and our campaign assistants went through our electoral districts, asking for voters' signatures. The people saw us and understood that we are actually running, that we are an actual team collecting signatures. So they gave us their support and signed. And then, suddenly: boom! The authorities say Gudkov is not even on the list. And instead, a pro-government candidate emerges nobody has ever seen before. 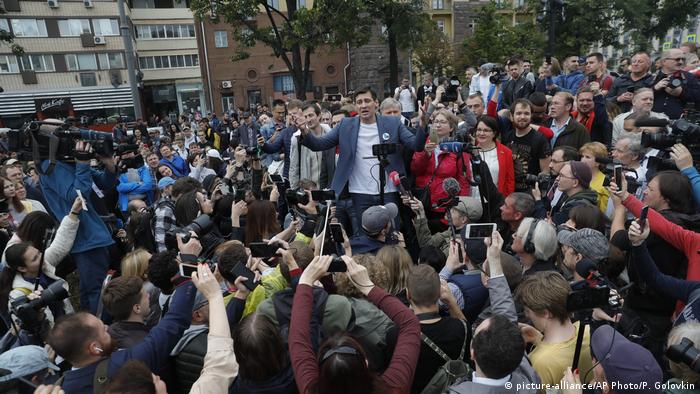 Gudkov: Authorities think 'people will believe anything' they say

Do you think the protests will change anything?

We really want them to have an impact. If they keep brazenly excluding us from the election, we will fight for an election boycott. Or for the Moscow State Duma to be dissolved. I am no fan of protests. In fact, I do not like them at all. I am tired of them. But I had no choice.

Read more: Russia in the Council of Europe: What does it mean for human rights?

The situation is odd insofar as the ruling party is currently very unpopular. Even party chairman Dmitry Medvedev has criticized the United Russia party. While campaigning, party candidates have been trying to conceal their party membership. Is this helping your cause?

Of course. Gathering signatures was easy for me. I approached voters and told them: support us against the United Russia party. They stopped in their tracks and gave us their signature. But as the approval rating of the ruling party drops, authorities also get more repressive. So we are constantly subjected to provocations. Several times, my campaign assistants were robbed. One was beaten up and suffered a brain concussion. The other got off lightly with just a bloody lip. Lists with signature were snatched from their hands.

When you look at Russian politics, you get the feeling that Russians keep reelecting omnipotent President Vladimir Putin and that there is no properly functioning opposition in the country. Why is that?

There is an opposition in Russia. They are the people whose investigative reports help fight corruption. There are politicians and activists...

Yes, among others. Alexei Navalny, Ilya Yashin, Dmitry Gudkov... but there is another kind of opposition, too. Like ordinary citizens fighting against toxic waste incineration plants. Or journalists demanding the release of their colleague Ivan Golunov [who was recently arrested by Russian police for alleged drug possession]. All these people are dissatisfied with the situation in Russia today.

Is this a proper civil society?

...it is growing increasingly influential in our country. Our society is becoming politicized. As are our private lives. Look at the young people. They are outraged because authorities are constantly talking about introducing internet censorship. And then they see political dinosaurs like Alexander Bastrykin, the head of the Investigative Committee of Russia, looking at computer screen through a magnifying glass.

And Vladimir Putin, who does not know how to use a smartphone and mixes up the terms transgender and transformer. These young people constitute a civil society that wants the old decision-makers to leave. So they are also an opposition force in Russia. One day, these two opposition forces will unite and change our country.

Plans for a new highway through Russia's capital have sparked protests. Locals say the project could cut straight through a nuclear waste site, sending radioactive dust into the air and into Moscow's river. (23.07.2019)