Police in Moscow arrested more than a thousand people as they gathered to demand fair local elections after opposition candidates were blocked. Opposition leader Alexei Navalny was arrested last week.

Police in Moscow detained more than 1,300 people on Saturday during an unauthorized rally to demand fair upcoming elections in Russia's capital city, activists said a day after the protest.

Around 3,500 people took to the streets, according to media reports, in a demonstration which lasted more than seven hours.

The online civil rights blog OWD-Info spoke of a total of 1,370 arrests, however, Moscow police were quoted as saying that 1,074 people were held "for a variety of offences."

Demonstrators were protesting a decision by Moscow's electoral authorities to keep several opposition members off the ballot for a city council election. The opposition candidates allegedly used fake signatures on their nominating petitions.

Through her spokesperson Maja Kocijancic, she said: "These detentions ... seriously undermine the fundamental freedoms of expression, association and assembly."

Mogherini urged Russia to respect its international obligations when conducting the local elections, slated for September.

Alexei Navalny, Russia's most prominent opposition activist, had called for people to attend the rally. He was jailed for 30 days on Wednesday for organizing "unauthorized" demonstrations.

Officials in the Russian capital have declared the demonstration illegal. Moscow Mayor Sergei Sobaynin said the protests were a "security threat" and vowed that "order will be ensured according to the law."

Two of Navalny's associates, Ivan Zhdanov and Ilya Yashin, said they had been detained ahead of the demonstration. 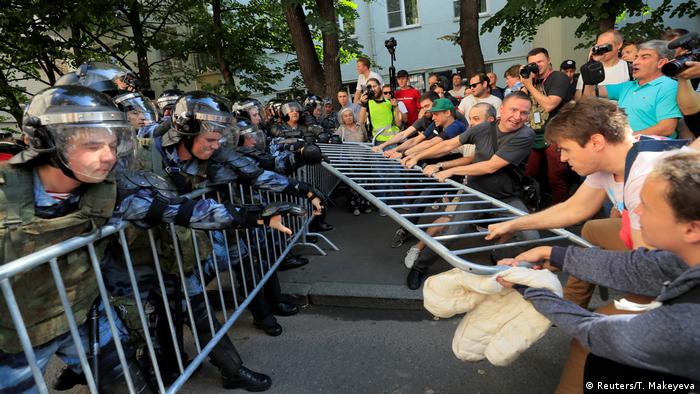 Navalny has said protests will continue until the city allows the rejected candidates to run in the election.

One protester told a DW correspondent on Saturday that the demonstrations in Moscow reflected larger discontent in Russia.

"Moscow is a reflection of Russia. If things were really bad in Moscow, and things were amazing in the rest of the country, that would be a different thing. But it's the same everywhere. If I lived in St. Petersburg or Kazan or in Novgorod I would also be out protesting." 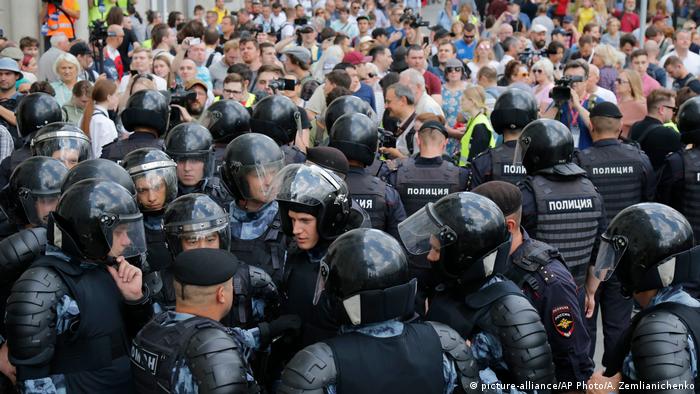 Investigators reportedly raided the homes and headquarters of several disqualified candidates in the run-up to the protest.

"If we lose now, elections will cease to exist as a political instrument," said Gudkov, whose home was raided Wednesday. 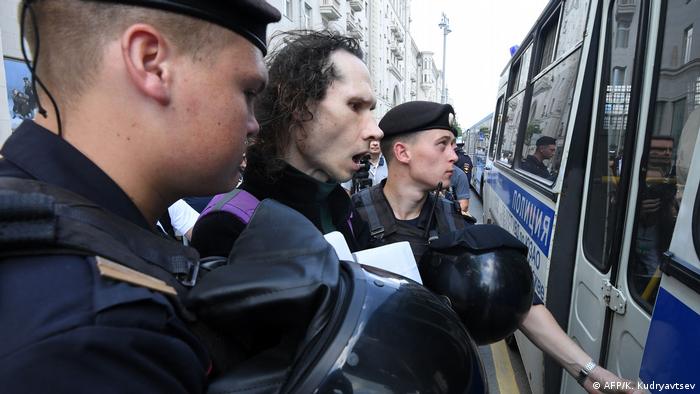 A demonstrator is detained ahead of Saturday's protest in Moscow

The opposition sees the local elections as an opportunity for political participation, as anti-Kremlin parties have been steadily marginalized in Russian politics since President Vladimir Putin first took office 20 years ago.

Kremlin-backed candidates have proven less popular in the capital than in other parts of Russia. However, independent parties say they face many bureaucratic hurdles in running for office compared to pro-Kremlin candidates.