Demonstrators in Russia have launched fresh protests against unfair treatment of the opposition ahead of city elections in Moscow next month. Police have detained hundreds of protesters, including activist Lyubov Sobol. 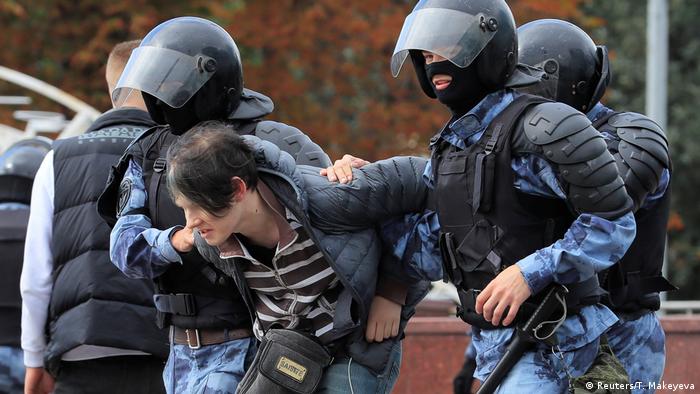 Russian opposition protesters on Saturday took to the streets in Moscow to once again call for fair local council elections, despite a sweeping police crackdown and ban on the event.

The unauthorized march comes after stark warnings from Russian authorities not to go ahead with the rally.

Protesters described the demonstration as "a walk along the boulevards" in Moscow as anger boils over the refusal of officials to let popular opposition candidates run in next month's city council elections.

Independent monitoring group OVD-Info said that authorities had detained over 800 people in central Moscow on Saturday. Police said in a statement there were 600 arrests and that only 1,500 people took part in the protests. DW reporters witnessed dozens of people being detained.

A heavy police presence, metal barriers and empty buses used to transport detainees lined the boulevards, and mobile internet was down in central Moscow. Some shops and cafes were shut Saturday following warnings by city authorities.

During last weekend's rally, nearly 1,400 people were arrested. OVD-Info said it is the highest number of arrests since 2012, when tens of thousands protested Vladimir Putin's return to the presidency after four years as prime minister.

Most of those arrested last weekend were released immediately, but some still remain in jail.

Sobol had called on people to attend the demonstration. The former FBK lawyer was detained in a taxi as she tried to make her way to the protest and driven off in a police van. Officials also said they have opened a criminal investigation into alleged money laundering by an anti-corruption foundation set up by jailed opposition politician Alexei Navalny.

President Vladimir Putin has yet to comment on the situation in Moscow.

In the polls in September, the opposition hopes to end the monopoly of Kremlin loyalists in Moscow's city council.

Jailed Russian opposition leader Alexei Navalny has filed an official complaint saying he was poisoned while in jail on Sunday. Five people have been detained for organizing last weekend's protests in Moscow. (02.08.2019)

Police in Moscow arrested more than a thousand people as they gathered to demand fair local elections after opposition candidates were blocked. Opposition leader Alexei Navalny was arrested last week. (27.07.2019)