Jailed Russian opposition leader Alexei Navalny has filed an official complaint saying he was poisoned while in jail on Sunday. Five people have been detained for organizing last weekend's protests in Moscow. 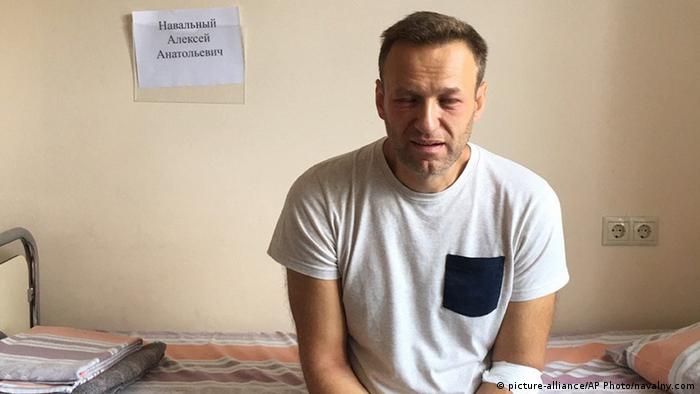 Russian opposition leader and anti-corruption activist Alexei Navalny has contacted the Investigative Committee in an effort to seek a probe about his alleged  poisoning, his lawyer, Vadim Kobzev wrote on social media on Thursday.

Kobzev said Navalny's legal team wanted forensic identification of the agent that allegedly left Navalny with an allergic skin reaction on Sunday. He also wanted CCTV footage of his jail cell to be examined.

On Wednesday, Russia's Sklifosovsky toxicology institute said "poisoning substances were not found" in Navalny's samples, according to Russian news agencies. The official denial was slammed by Navalny's personal physician, Anastasia Vasilyeva, as "completely absurd" because bedsheets and clothes were not tested.

On Sunday, the 43-year-old was rushed to hospital from jail, where he had been held for urging people to take part in Saturday's opposition protest in Moscow. Navalny was sent back to jail on Monday, against his doctor's objections.

Saturday's crackdown by police resulted in the mass arrests of nearly 1,400 people protesting over the exclusion of opposition candidates from local elections expected in September.

On Thursday, Russian investigators said they had detained five of 10 people they had identified as organizers of Saturday's rally on a charge of instigating "mass unrest," a charge punishable with up to 15 years in prison.

Those reportedly detained included Alexey Minyaylo, a well-known activist and aide to Lyubov Sobol, an independent and one of 16 candidates who have fought to get on the ballot in the local election.

Sobol, 31, is a close ally of Navalny and has refused food for 19 days to protest her exclusion from the election. On Thursday, she called on Russians to join a peaceful "walk" in central Moscow next Saturday.

Sobol said the Kremlin faced a political crisis because people were demanding "political representation that takes account of their own opinion."

"It's not possible to ignore people anymore," Sobol told the Reuters news agency. "I plan to go out every weekend on the city's streets."

President Vladimir Putin and the Kremlin have not commented on the standoff, but Moscow Mayor Sergei Sobyanin has accused opposition activists of plotting mass disorder.

DW's Sergey Dik was detained while covering an opposition rally in Moscow, despite telling officers he was a journalist. When he presented his press accreditation to police, he was told it was "some worthless document." (28.07.2019)

Thousands of people have turned out in Moscow to protest the non-registration of independent candidates for local elections. This issue is one of the rare cases that has united Russia's usually divided opposition. (20.07.2019)