Russia bans 'The Death of Stalin' from movie theaters

The film sheds a comic light on the power struggle after Joseph Stalin's death in 1953. A group of officials and film directors said the film was "extremist" and "aimed at humiliating the Russian people." 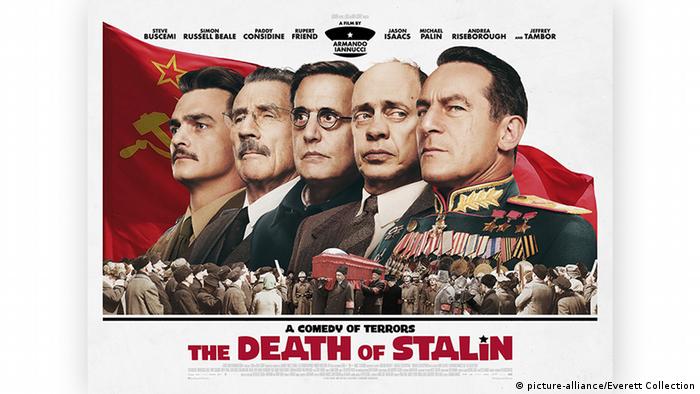 Russia's Culture Ministry on Tuesday banned the satirical film "The Death of Stalin" from Russian theaters after politicians and prominent film figures criticized it for mocking Russian history.

The ministry said it decided to pull the movie's license because it contained "information whose distribution is legally banned in Russia," according to AFP news agency.

The film by Scottish writer-director Armando Iannucci, based on a French graphic novel of the same name, comically portrays the power struggle after Soviet leader Joseph Stalin's death in 1953. It premiered in September at the Toronto International Film Festival and was set to open in Russia on Thursday.

Twenty-two officials and film directors signed a letter denouncing the film and calling for the government to delay its release after a private viewing on Monday.

Signatories said the film "blackened" the memory of Russians who had fought against Nazi Germany and contained elements "that can be assessed as extremist and aimed at humiliating Russian people."

The letter said the film should be delayed until after February, when Russia is set to celebrate the 75th anniversary of the Battle of Stalingrad — a revered victory for Soviet forces against Germany during the Second World War.

"The Death of Stalin" became one of the most searched phrases among Russian users of Twitter following the Culture Ministry's announcement.

Russian media have greeted the film with mixed reviews, with some broadsheet newspapers praising it for its depiction of an important episode of the country's history.

But the head of Russia's Military-Historical Society condemned the comedy. "It's an abomination and filth," Kononov told state-funded RT. "All the characters are portrayed as idiots … It's how the West sees our people."

Recent opinion polls show many Russians have a favorable view of Stalin, despite his legacy as a tyrant whose purges between 1924 and 1953 ended with the deaths of millions of Soviet citizens.

President Vladimir Putin has criticized Stalin's purges, but also lauded the Soviet leader's achievements. Stalin led the Soviet Union to victory in the Second World War and oversaw much of its industrialization.

The government sparked controversy in recent years after it edited school textbooks to show the history of Stalin more positively.

Read more: The Russian Revolution 100 years on: 'Russia hasn't dealt with the past'

Opinion: Mikhail Gorbachev failed, and made the world a better place 31.08.2022

Many countries and people around the world owe their freedom to Mikhail Gorbachev, the last Soviet leader. His present-day successor, Vladimir Putin, could not be more different, says DW's Miodrag Soric.