Opinion: The Kremlin's silence about Stalin

A man from Siberia wants to sue his great-grandfather's murderers; among them Joseph Stalin. Heated discussion has ensued in Russia. Only the Kremlin has no a clear position – for a reason, says Yuri Resheto. 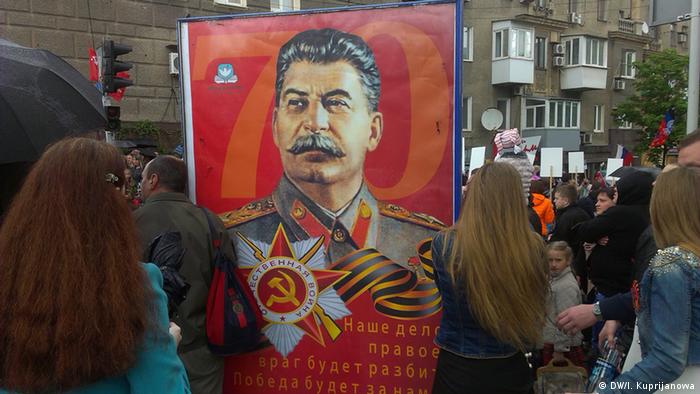 "Pay no attention to that man behind the curtain!" A famous line from the American childrens' movie "The Wizard of Oz," meaning: Don't ask too many questions or you might uncover the truth. Another key line from the film: "Toto, I've a feeling we're not in Kansas anymore." Meaning: We're in a completely new situation.

The curtain is the wall of the Kremlin. The man behind it… well, you know who. And this man is keeping silent on a subject many people in Russia are discussing very loudly at the moment. Because many people have been affected, bothered, upset by it. Again.

The Terror has not been forgotten

It concerns one of Vladimir Putin's predecessors in the Kremlin: Joseph Stalin, personally, and his crimes during the so-called Great Terror from 1936 to 1938. The crimes of the Soviet regime. This was a taboo during the Soviet era; it then became a favorite topic for Russian historians before somehow fading into obscurity after the turn of the millennium. Now it's back in the news again.

The descendants of the millions of victims of Stalin's regime are glad of it. At last! Denis Karagodin from the Siberian city of Tomsk is one of them. He's discovered who was personally responsible for his great-grandfather's murder, and now he's calling for punishment. There's no statute of limitations for murder.

Soviet nostalgics, on the other hand, are furious. What's the point of dragging this dirty laundry out into the open? What good does it do Russia? There are more important things, such as: Are pensions increasing? Salaries? The standard of living? All the man from Tomsk cares about is revenge, they say; the whole affair is just dividing the country.

No. This isn't about revenge. 34-year-old Denis Karagodin just wants to call things by their names. To uncover the truth. To process it, internalize it, so as to go on living with it. What is causing division among Russians is not discussion of their history, but the silence surrounding it. The sweeping under the carpet. The not looking behind the curtain. Like in the Wizard of Oz.

The Russian human rights organization Memorial took up the Karagodin case, and published the list of 40,000 members of the NKVD, which preceded first the Soviet KGB intelligence service and now the FSB. Treason! some cry. At last, say others. And what does the Kremlin say? Nothing.

When asked by journalists from a Russian radio station, Putin's spokesman Dmitri Peskov was unable to formulate a coherent Kremlin position with regard to the so-called Great Terror. Not because he didn't want to, but because there simply isn't one. Still.

President Putin did sign in the "State policy guidelines to perpetuate the memory of the victims of political repression" in 2015. And according to this decree, a central memorial for victims of repression is to be constructed in Moscow, the so-called "Wall of Sorrow." However, at the same time, employees of one of the most important historical societies to deal with all aspects of political repression – the above-mentioned NGO, Memorial – have been vilified as foreign agents, and memorials to Stalin have been erected in Russia once again. With the tacit approval of the Kremlin.

Fear of the grassroots

In 1991, Putin, then 39 years old, warned of the danger of totalitarianism in Russia. He considered this danger to be latent in the Russian mentality: "All of us, myself included, sometimes believe that if order were imposed with an iron hand, we could all live better, more comfortably and securely. In reality, though, this comfort and security would soon be gone, because that iron hand would soon throttle us all."

And today? Never in the history of modern Russia has the yearning for an iron hand been as apparent as it is today. The yearning for censorship and state intervention.

This climate of denunciation and self-censorship is advantageous for the confrontation with the West. And that's the reason why the Kremlin is reluctant unequivocally to condemn the Stalinist Terror.

Instead, there is a fear that every movement that comes from the grassroots, from the people, from voting citizens, that is not sanctioned from above, could constitute a threat to the retention of power.

Who killed Stepan Karagodin? The question has preoccupied his family since the Russian peasant was executed almost 80 years ago. Now his great-grandson says he knows the killers' names. Aaron Tilton reports from Moscow. (23.11.2016)