Opinion: Germany should help Turkey stay tied to the West

Germany is worried about Turkey’s economic stability but not enough to offer financial aid. Yet German support could be just the tool to keep Recep Tayyip Erdogan from turning his back on the EU, writes DW’s Seda Serdar. 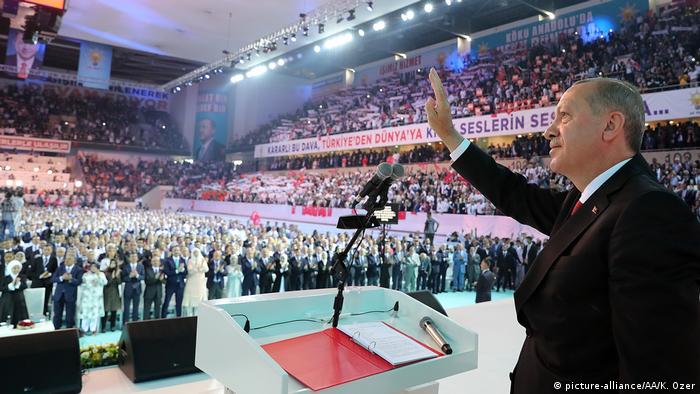 Turkey cannot afford to have multiple battle fronts. US sanctions and tariffs and a political dispute with Washington over an imprisoned American pastor is forcing Ankara to cultivate better relations with Europe.

The recent release of German citizen and journalist Mesale Tolu and human rights defender Taner Kilic are signals that Turkey is willing to normalize relations with Germany and the European Union. These, however, are baby steps. The Turkish government would need to make serious changes, both economically and politically, if it wants to receive any substantial support from Germany. For instance, it would need to insure the independence of the Turkish central bank, prove that Turkey is willing to return to rule of law and make room for a free and independent media.

To take such steps, Turkish President Recep Tayyip Erdogan must be willing to give up the substantial power he obtained in the June presidential election. Because Erdogan's goal is to fix the economy at any price, the country's worsening economic situation could force his hand.

However, Erdogan could also turn to Russia or China, and Qatar is yet another option. Ankara and Doha see eye to eye on many issues, and Qatar has already declared that it will invest $15 billion (€13 billion) in Turkey in the form of economic projects and deposits.

The EU, and especially Germany, should neither let Turkey distance itself from Western values nor allow it to descend into instability. This isn't beneficial for anyone due to multiple reasons.

Firstly, Turkey has NATO's second-largest military based on number of personnel. It is also strategically important and plays a crucial role with its Incirlik airbase in the fight against the so-called Islamic State in Syria and Iraq.

Additionally, Turkey is a buffer between Europe and the Middle East, and an unstable Turkey could unleash a new migration flow. The EU and Turkey reached a migration deal in 2016 that was intended to stem the flow of migrants over the Balkan route into the bloc.

And finally, Turkey's economic ties with Germany are substantial. More than 7,000 German firms operate in Turkey, making it in both countries' interest to keep German investment from fleeing the country.

Certainly Germany's goal should not be to strengthen an authoritarian regime by providing financial aid. But bringing Turkey closer to Western values and showing that those Turks who believe in democracy have not been abandoned is worth the German government's attention.

Erdogan's upcoming state visit in Berlin could be an important step in improving German-Turkish relations —and bringing Turkey closer to Europe, if the cards are played right.

Recent diplomatic tension and harsh rhetoric have pushed Germany and Turkey apart, but the relationship is not completely shattered. On economic issues in particular, the two countries share common goals. (16.08.2018)

The fallout from Turkey's economic crisis may have eased somewhat, but the worst of it does not appear to be over. As DW's Gunnar Köhne reports, it is the country's poor who are being hit hardest. (17.08.2018)