The fallout from Turkey's economic crisis may have eased somewhat, but the worst of it does not appear to be over. As DW's Gunnar Köhne reports, it is the country's poor who are being hit hardest. 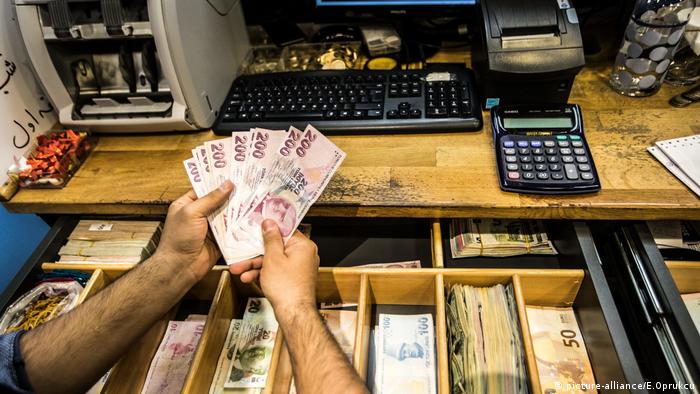 "We are doing well, we can't complain," says the owner of a small hotel in central Istanbul. His 15-room guest house has been fully booked since the start of summer. After the slump a year ago, tourists are returning to the city. With the lira suffering, foreigners pay with either euros or US dollars.

Turkish exporters are also not among those complaining about the current financial crisis. Entrepreneur Cemil Mirasoglu has weathered several such slumps during his long career. For 38 years he has been producing electrical parts for cars and buses in a suburb of Istanbul, most of which are for the European market.

"We have to buy partly from suppliers in euros, but we also sell to Europe in euros," he says. "So the currency fluctuations of the Turkish lira don't affect us much." Besides tourism, medium-sized export companies such as Mirasoglu's are the country's biggest source of foreign currency. Almost half of Turkey's exports go to the European Union.

Symbols of a struggling economy

But these are exceptions. In all other sectors of the Turkish economy, the collapse of the lira by 40 percent since the beginning of the year has stirred up fear. This financial uncertainty is visible in the countless unfinished high-rise buildings, and the stationary cranes beside them, lining city highways in Istanbul. 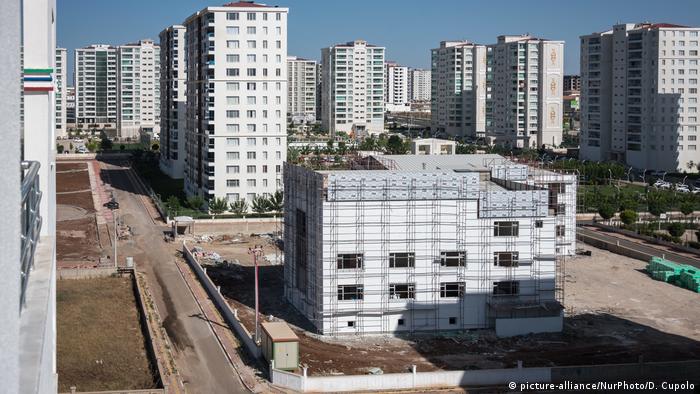 Unfinished construction projects are a common sight in Turkey these days

To Turkish economist Mustafa Sonmez, these concrete skeletons are an especially pertinent symbol of the country's current woes. For years, the construction sector was a pillar of the Turkish economy, supported by public contracts for bridges, roads and tunnels and the promise of quick money from investors, especially those based in Arab countries.

"Most of it came about though credit on government loans and the regulated low-interest policy. This pumping of the economy was the only way to achieve spectacular growth rates of over 7 percent," says Sonmez.

Read more: On a Greek shore, rich Turks spend despite the crisis

Left without a home

Pensioners such as Zeynep Duzgunoglu are paying the price. Her small house in the Fikirtepe district of Istanbul was demolished as part of an urban renewal program. In return, she was given a new apartment in a high-rise building that was to be erected on the site of her property. But then the entrepreneur financing the construction went bankrupt, and Duzgunoglu has been without a roof over her head ever since. She has been camping on the building site for months in protest, together with other people impacted by the economic crisis, but the authorities continue to ignore her.

Restaurant offers fishes and loaves to rescue the Turkish lira.

Not only is Duzgunoglu without an apartment — with a pension worth roughly just €200, she is left with less and less money in the face of soaring inflation. A kilogram (2.2 pounds) of meat now costs about €10, a kilogram of potatoes more than €1. On top of that, the government has been increasing the cost of electricity and gas almost monthly — most recently by 10 percent in July. The reason: Turkey has to rely on imports for almost all its energy needs.

"We're getting poorer and poorer," says Duzgunoglu. Her desperation and fears are being felt by many. Reports of mass redundancies are on the rise, while unemployment figures are continually increasing. Officially, the rate is more than 12 percent, although the real number is likely to be much higher since many Turkish people do not have jobs that must pay into social security benefit programs.

The feelings of panic are not just limited to the most economically vulnerable. Among the Turkish middle class, which experienced increased prosperity under Turkish President Recep Tayyip Erdogan, fears of decline are spreading.

While a few years ago it was still common for middle class families to send children to private schools and kindergartens, the number of enrollments is dropping nationwide. According to the head of a private preschool in Istanbul, many parents wanted to wait to register their children until the last day before school starts in September, in the hope that the economic situation would improve by then. However, there are few signs indicating these hopes will come to fruition.