SPD's Andrea Nahles says Germany may give aid to Turkey

Ahead of Turkish President Erdogan's trip to Germany in September, the SPD's Andrea Nahles has said German aid is a possibility. It comes as tensions between the US and Turkey rise over the house arrest of a US pastor. 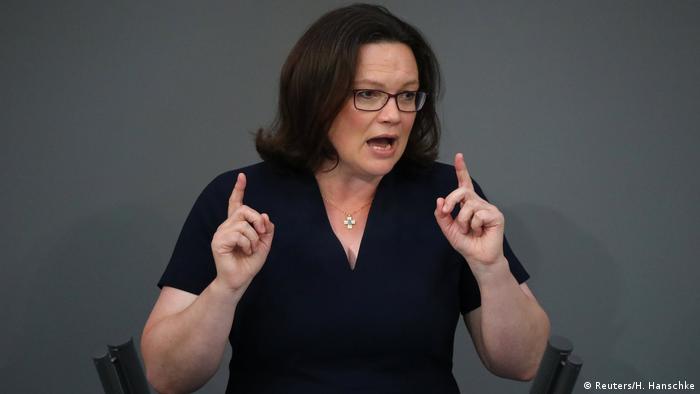 The head of Germany's Social Democratic Party (SPD), Andrea Nahles, has said there could be circumstances in which Germany would provide financial assistance to Turkey during its economic crisis.

"A situation might arise where Germany needs to help Turkey, regardless of political tensions with President Recep Tayyip Erdogan," Nahles said in an interview published in German Funke media group newspapers on Sunday.

"Turkey is a NATO partner who we cannot ignore. It is in everyone's interest that Turkey remains economically stable and that the current turbulence involving its currency can be stemmed," Nahles said

Since the beginning of the year, the Turkish lira has dropped more than 35 percent against the US dollar.

Nahles said Erdogan's planned visit to Germany in September was the correct move.

"The federal government must remain in dialogue with Turkey at all levels," she said.

"It is my clear expectation of the chancellor that, of course, critical issues will also be addressed. In particular, this includes the arrest and detention of German nationals in Turkey," she continued.

Fresh losses for the lira, and some Turks shrug

Nahles' party colleague, the former German Foreign Minister Sigmar Gabriel, has also voiced an urgent appeal to both Germany and Europe not to isolate Turkey.

"In our own interest, we must do everything to keep Turkey in the West," Gabriel told newspapers from the Redaktionsnetzwerk Deutschland (RND).

Gabriel warned that Europe, and not the USA, would pay the price if Turkey were destabilized by sanctions imposed by Washington. He said the consequences could be economic disruption and an increase in the number of migrants and refugees coming from the country.

He also prophesized that "nationalistic forces" in Turkey could "reach for the atom bomb, as in Iran and North Korea, to make themselves unassailable."

According to a report from German news magazine Der Spiegel, Germany has urged Turkey to accept an International Monetary Fund aid program.

The issue is said to have been discussed during a phone call between Germany's Federal Finance Minister Olaf Scholz and his Turkish counterpart Berat Albayrak last Thursday, Spiegel reported.

But this could be made difficult due to tensions between Turkey and the US, which have escalated further over American pastor Andrew Brunson, who is under house arrest in Turkey. Brunson faces up to 35 years in jail if convicted of espionage and terror-related charges, but he maintains his innocence.

Read more: Turkish economic shadow looms over Europe and beyond

The US imposed further sanctions on Turkey and placed sanctions on two leading Turkish ministers, accusing them of serious human rights abuses. Turkey has threatened to hit back with measures of its own.

On Saturday, Erdogan said his country will stand strong against an "attempted economic coup" amid the tensions with the US.

Speaking to thousands of supporters in Ankara, Erdogan said the country was being "threatened by the economy, sanctions, foreign currency, interest rates and inflation."

"We tell them that we see their game and we challenge them," he said.

The United States and Turkey have agreed to deal with the row over detained US pastor Andrew Brunson diplomatically. Secretary of State Mike Pompeo has warned Turkey of serious consequences if the pastor is not released. (03.08.2018)

The fallout from Turkey's economic crisis may have eased somewhat, but the worst of it does not appear to be over. As DW's Gunnar Köhne reports, it is the country's poor who are being hit hardest. (17.08.2018)