Investors are losing faith in former economic reformer Tayyip Erdogan. It's not ruled out that the current crisis may end badly for him, but also for economies in Europe, says DW business editor Henrik Böhme. 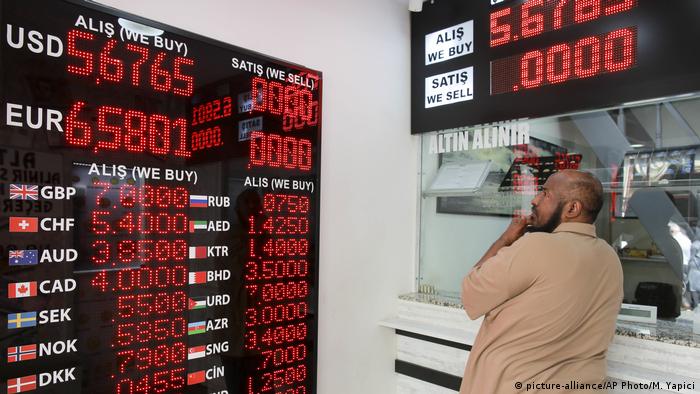 Let there be no mistake — the International Monetary Fund certainly has a rescue plan for Turkey in the drawer, although no one wants to confirm this right now. The IMF also had such a plan back in 2002 when Turkey was an unstable nation, with a 40 percent inflation rate and high unemployment haunting the country.

It was only through IMF loans that a state default could be prevented back then. It was also the very year when Erdogan's party, the AKP, rose to power. The then government under Prime Minister Tayyip Erdogan stuck to the terms and conditions the IMF loans entailed.

The Turkish economy would prosper thereafter. Many new jobs were created and inflation was brought down to under 10 percent, with Turkey becoming an attractive location for foreign investors. German companies have been among them. People earned good money again and were well-disposed toward Erdogan. After all, he had brought them prosperity and political stability.

Let's not forget that when the euro crisis started and Greece looked doomed to failure, Turkey was often cited as an example of how a nation could wriggle out of a difficult crisis. But all of that is now in danger.

When the wind changes direction

Of course, the higher US tariffs on Turkish steel and aluminum exports and their market impact were the most recent sign of the crisis in Turkey, but it has been simmering for months on end. Since the beginning of the year, the lira has shed almost half its value against the dollar. Inflation has reached 15 percent, and Turks will feel the pinch sooner or later.

The ones who used to hail Erdogan as a big reformer are likely to become the ones who turn their backs on him should they lose their jobs and should they see their standard of living going down.

However, the Turkish president lays the blame at other people's doorsteps, calling dollars, euros and gold as weapons used against the country in what he perceives to be an economic war against Turkey. At the same time, he frequently questions the use of an independent central bank, which is putting off investors. And he keeps claiming that interest rates have to be lowered and not raised to curb inflation and support the national currency. The result is that investors lose faith.

There's a massive capital flight which is also impacting other emerging economies. And Turks called upon by their own president to exchange their dollars and euros for liras are doing exactly the opposite by withdrawing their hard currency deposits to store them at home.

No reason to panic (yet)

Of course, the specter of contagion is going around in Europe. Investors are worried about their money. Capital outflows and the lira's devaluation are nurturing fears that companies and banks will not be able to pay back loans taken out in euros or dollars. But so far, the situation seems manageable.

According to data from ABN Amro, the claims of European banks amount to €143 billion ($163 billion), with the most affected lenders being Spain's BBVA and Italy's Unicredit. For German banks, the total is somewhere between €18 billion and €20 billion.

Nobody can be interested in a massive economic crisis in Turkey. And no one needs to be afraid in Europe. Eurozone economies are in a stable state again, stable enough to survive some Turkish repercussions.

On the other hand, a full-blown Turkish crisis would add to other major headaches in Europe such as the uncertain result of the current Brexit negotiations and the US administration's unpredictable trade policies.

It's up to Erdogan to get Turkey's economy back on track again — he already managed to do that once.