The Turkish lira crash is threatening to turn into a debt and liquidity crisis, with no end in sight. Instead of acting the Turkish leadership has warned of an "economic war," and hit back at a "currency plot." 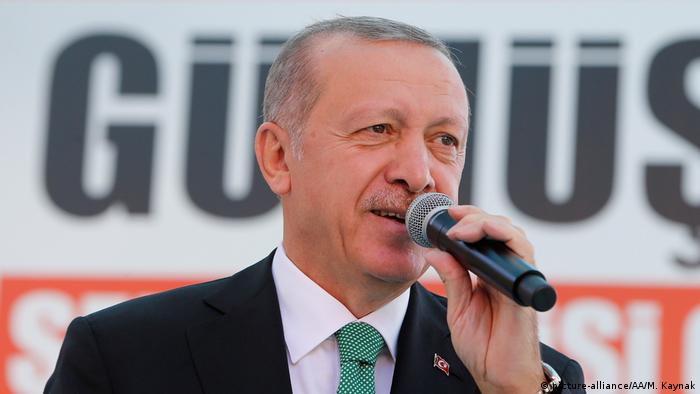 Turkey is in the throes of a full-blown currency crisis, with little sign that the government has a plan to deal with one of the worst emerging market currency meltdowns in recent history.

The crisis threatens to throw the world's 18th-largest economy into a downward spiral of bankruptcy and trigger contagion in emerging markets and Europe.

In a keynote speech on Saturday in the Black Sea city of Rize, President Recep Tayyip Erdogan described the currency's fall as a "currency plot." He said those who move the currency on financial markets think they can destroy Turkey, going back to comments he has made several times in previous days.

He pushed back against pressure to hike interest rates which he said "should be kept to a minimum because they are a tool of exploitation that makes the poor poorer and the rich richer."

The Turkish lira fell as much as 22 percent Friday, before paring losses back to 17 percent, extending a rout in the currency from earlier this week. It stood at 6.47 to the US dollar at 1900 UTC on Friday. The lira has lost nearly 40 percent of its value since the start of the year and nearly 30 percent since Erdogan took over the office with new sweeping powers in June.

The currency carnage was pushed along on Friday by US President Donald Trump's administration, which announced the United States would increase tariffs on Turkish steel and aluminum imports.

The tariffs themselves are minor and impact around $1 billion (€875 million) in trade, but they weighed on market confidence in the vulnerable Turkish economy.

"Their currency, the Turkish lira, slides rapidly downward against our very strong dollar," Trump wrote on Twitter. "Our relations with Turkey are not good at this time."

In an op-ed published in The New York Times, Erdogan said, "The United States has repeatedly and consistently failed to understand and respect the Turkish people's concerns," and added that "unless the United States starts respecting Turkey's sovereignty and proves that it understands the dangers that our nation faces, our partnership could be in jeopardy."

The continued imprisonment of US pastor Andrew Brunson has weighed heavily on relations between the United States and Turkey, leading to a series of escalations. Ties between the two NATO allies have also nosedived over American support for Syrian Kurdish forces, Ankara's plans to buy a Russian missile system and Turkey's demand that Washington extradite US-based Islamic cleric Fethullah Gulen, whom Erdogan blames for the failed July 2016 coup attempt. There is also an impending showdown in November over US sanctions on Iran, a major oil and gas supplier to Turkey.

While souring relations between the Washington and Ankara have added to Turkey's economic woes, they are only a proximate cause of the market mayhem.

Observers have seen a vulnerable economy for months, something that has been exacerbated by political developments and Erdogan's government.

Umit Akcay, a professor of economics at the Berlin School of Economics and Law, wrote on Twitter: "The warnings we have issued for months are unfortunately happening. Turkey is experiencing a currency crisis. We are entering a very difficult period. The government is responsible."

Turkey has traditionally suffered from yawning current account deficits, which it has filled through external borrowing in foreign currency. Driven by a search for higher yields, external funds entered the Turkish economy to finance deficits, massive government spending and company borrowing. Credit-fueled growth, especially in the construction sector, helped the Turkish economy grow.

However, investors have pulled back money from the Turkish market in recent months as the US Federal Reserve raises interest rates and cuts back on asset holdings from quantitative easing in response to a robust American economy.

This has caused the dollar to increase in value, the lira to lose value and Turkish bond yields to rise. Meanwhile, inflation has jumped to over 15 percent, reaching a 14-year high.

The lira sell-off has raised concerns that Turkish firms and banks that took out loans in dollars and euros will be unable to repay their debts after years of borrowing. The currency crisis is turning into a debt and liquidity crisis. 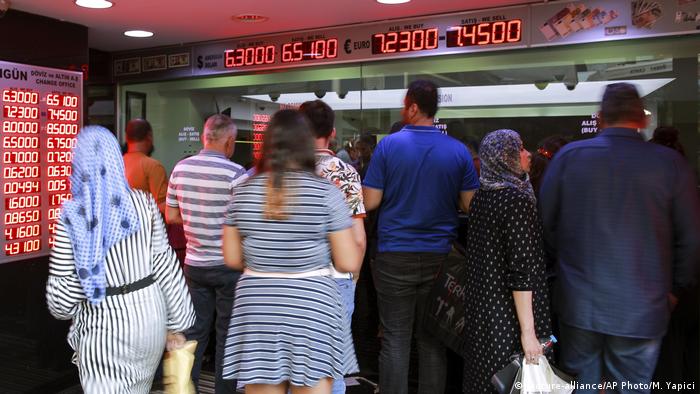 "Turkey is threatened by a financial crisis, whereby loans are not repaid, companies file for bankruptcy and this then hits the banks. We are heading in this direction," Turkish economist Korkut Boratav told DW.

The pressure on Turkey is reflective of broader trends in emerging market currencies, although the lira is by far the worst performer.

That's because investors have lost confidence in the Turkish economy under Erdogan, who believes in unorthodox economic policy, demands low interest rates and constantly assails "the interest rate lobby."

After winning a June election that cemented expanded presidential powers, Erdogan spooked markets when he tightened his control over the central bank.

Instead of appointing technocrats like Mehmet Simsek, the former finance and economy minister, in whom international investors had faith, Erdogan appointed his son-in-law Berat Albayrak to lead the newly empowered Finance Ministry. This has raised concerns over the central bank's independence. 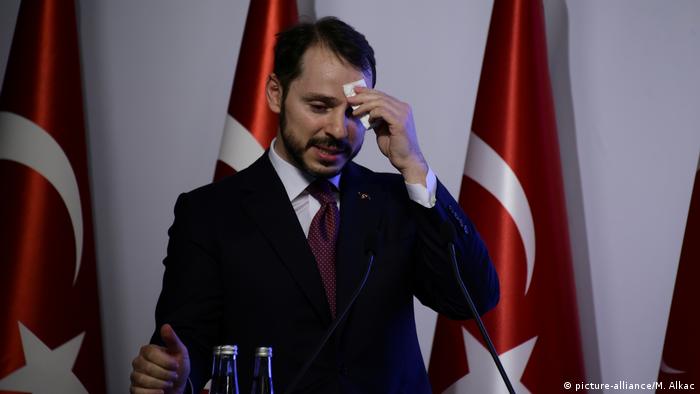 Erdogan has not inspired confidence in responding to the economic meltdown. He and some of his ministers are speaking of "economic war" and a vague "campaign" waged by nefarious external powers designed to weaken Turkey.

On Friday, he again urged Turks to exchange their gold and dollars for lira. That call came as Albayrak delivered a much-touted economic plan, which fell flat and failed to address the current economic crisis.

Timothy Ash, an economist covering emerging markets, commented on Twitter that Turkey needs to act quickly instead of suggesting that the country can wait until the next monetary meeting in September.

"Turkey — reflecting on the Albayrak performance today he gave zero indication of actual policy. And he expects the market to wait till September until the MTP. That is miles away. Turkey needs policy ACTION now if it is going to manage through this," he wrote.

Instead of taking quick and drastic action to shore up confidence, such as raising interest rates or going to the International Monetary Fund (IMF), the government is couching itself in nationalistic rhetoric of sacrifice and an escalating war of words.

On Thursday, Erdogan told supporters: "Various plots are ongoing. Don't pay attention to these campaigns. They have the dollar, [but] we have our people … and Allah."

Meanwhile, in his outline of Turkey’s economic plan, Albayrak tied the economic situation to the easy credit the government has used to boost growth and gain political support.

US President Donald Trump has announced higher tariffs on steel and aluminum imports from Turkey. The move added pressure to that nation's already troubled economy and came amid a diplomatic row with Washington. (10.08.2018)

With diplomatic tensions high, the Turkish lira has hit yet another all-time low against the US dollar, impacting more than just the Mediterranean country itself. But will the spillover into the eurozone bring a bang? (10.08.2018)