US President Donald Trump has announced higher tariffs on steel and aluminum imports from Turkey. The move added pressure to that nation's already troubled economy and came amid a diplomatic row with Washington. 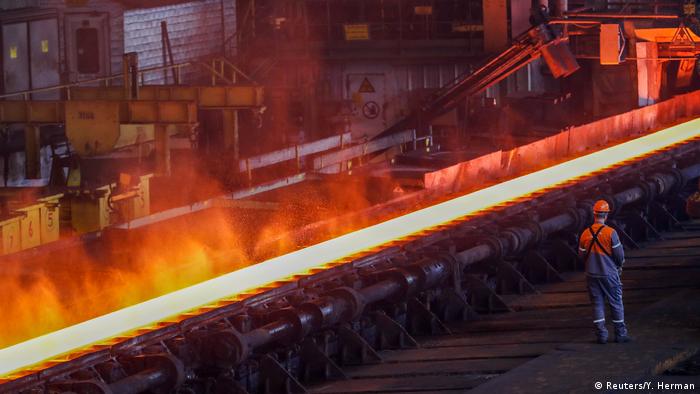 The Trump administration on Friday announced the United States would double steel and aluminum tariffs on Turkey, a move which helped already beleaguered Turkish lira plummet to record lows against the dollar.

"I have just authorized a doubling of tariffs on steel and aluminum with respect to Turkey as their currency slides rapidly downward against our very strong dollar," US president said on Twitter.

The tariffs apply a 20 percent duty on aluminum and a 50 percent levy on steel. Turkey exported $1.04 billion (€0.91 billion) worth of steel and $60 million worth of aluminum to the US in 2017, according to the Hurriyet newspaper.

Turkish Trade Minister Ruhsar Pekcan called on the US to return to the negotiating table. "Repeated efforts to communicate to the US administration that none of the stated criteria driving America's tariffs are applicable to Turkey have thus far proven fruitless," he said. "Nevertheless, we implore President Trump to resume negotiations."

Turkish President Tayyip Erdogan told a rally Friday that his country would not yield to what he called bullying and blackmail.

Trump's announcement saw the Turkish lira drop even further, crashing to a 19 percent daily loss against the greenback. Minutes before Ankara learned about the higher tariffs, the lira had already hit an all-time low of 6.87 against the dollar.

The marked drop came as Turkey's current strains with the United States showed no sign of abating.

Turkey remains at loggerheads with the US in one of the worst spats between two NATO allies in years over the detention of American pastor Andrew Brunson and a host of other issues.

The accelerated lira sell-off also deepened concerns about the exposure of banks to Turkey, particularly whether highly indebted companies would be able to pay back loans taken out in dollars and euros after years of overseas borrowing to fund a construction boom under Turkish President Recep Tayyip Erdogan.

Erdogan on Friday once again urged Turks to exchange gold and dollars into lira to stop the currency from plunging.

The president's characteristic defiance in the face of a shaky economy has further unnerved investors. Erdogan has frequently blamed an "interest rate lobby" and Western credit ratings agencies for trying to bring down Turkey's economy.