Opinion: Germany may get a government after all | Germany | News and in-depth reporting from Berlin and beyond | DW | 07.02.2018

Opinion: Germany may get a government after all

Germany has never waited so long for a coalition government. The agreement between Angela Merkel's conservatives and the Social Democrats was long overdue. But it's only a temporary victory, says DW's Christoph Strack. 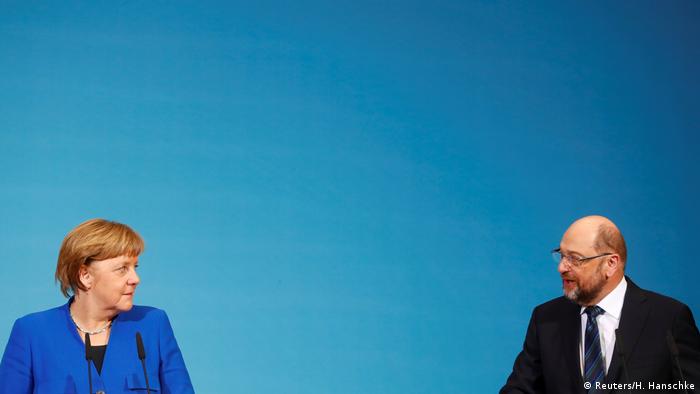 They finally made it. And they are exhausted. Some 135 days after Germany's general election and on the heels of seemingly endless wrangling, a new contract for a governing coalition has been completed. But now, following the negotiations, comes nervous anticipation. The contract is simply a document outlining the intention to form a government over the next few weeks. It is not a done deal.

Nevertheless, Germany has gotten a step closer to finally getting a government. Chancellor Angela Merkel's schedule on Thursday indicates just how important that step is. At midday she will welcome European Council President Donald Tusk, and in the evening she will host European Commission President Jean-Claude Juncker.

The European Union is waiting on Germany, which is, alongside France and its president, Emmanuel Macron, one of the most powerful members of the bloc. And Brussels has been waiting for quite some time. The window for EU reforms — which were an integral part of Germany's coalition negotiations — is closing.

A lack of trust

Depending on how one reads the coalition contract, it could be said that Europe is one of, if not the most important subjects negotiated between Merkel's conservatives and the Social Democrats (SPD). The foreign policy issues that suddenly appeared on the talks' home stretch reinforce that.

When it comes to domestic policy, however, it is difficult to discern a clear direction. The fact that the term "Heimat" (homeland) has been inserted into the title of the Ministry of the Interior (something that has long been the case in Bavaria) came as a bit of a surprise. Especially in light of ongoing nationwide debates about German identity and globalization — and not just those being argued by populist parties.

The complexity and detail of the more than 150-page contract represents the careful outlining of a governing arrangement, but it also represents a lack of trust among partners. Germany's parliament, the Bundestag, will have a rather thick book of issues to work through during the three-and-a-half years that remain in this legislative period. The topics in it were dictated by party leaders and not individual parliamentarians.

That said, the coalition agreement has been presented to the public with one major caveat: The SPD will have to clear one last hurdle before it can actually sign it — a vote among party members. That was not an issue after Germany's last general election in 2013, when three-quarters of Social Democrats voted in favor of working with Merkel's Christian Democrats (CDU) and their Bavarian sister party, the Christian Social Union (CSU), in a so-called grand coalition.

But things are different in 2018. When the SPD recently voted on whether or not to enter into formal coalition negotiations with the CDU/CSU, party leadership only garnered 56 percent approval. Those opposed to another grand coalition (Germany's third since 2005), most notably the SPD's youth wing, have been aggressively campaigning for a "no" vote from the party's 464,000 members — more than 24,000 of whom have joined in just the last few weeks.

A look at the ministerial roster, however, illustrates the tenacity with which the SPD obviously negotiated through the night. It is indeed surprising to see just which cabinet positions were given to the Social Democrats: most prominently, the Ministry of Foreign Affairs and the Ministry of Finance. Until now, ministries that held sway over another were accordingly led by ministers from different parties.

The unpredictability of the SPD base will remain a topic of speculation until the very last minute. But things will be just as suspenseful on the CDU/CSU side of the equation. The negotiating victories of one party, by necessity, mean that the other side was forced to concede.

Merkel, who heads the CDU, said before the final round of talks on Tuesday that "painful compromises" would have to be made. The final coalition contract illustrates just what she meant. And now it will be up to Merkel to sell those compromises to her own party base. The CSU, meanwhile, will not have to go through a vote or a party convention to approve the contract, but that does not mean the internal grumbling over Merkel's leadership will get any quieter.

The fact remains: It is a good thing, albeit long overdue, that the new coalition contract has finally come about. Germany has been operating with an acting government — one with very limited powers — for far too long. Yet for all the relief that the news has brought, things will remain tense: The last hurdle won't be cleared until March, when the SPD is expected to announce the results of its vote on the coalition contract.