Emmanuel Macron: ′France is back as a European reformer′ | Business | Economy and finance news from a German perspective | DW | 24.01.2018

Emmanuel Macron: 'France is back as a European reformer'

French President Emmanuel Macron has encouraged Europeans to open up to more political and economic reforms. He supported the idea of a two-speed Europe where a core group of reformers should take the lead. 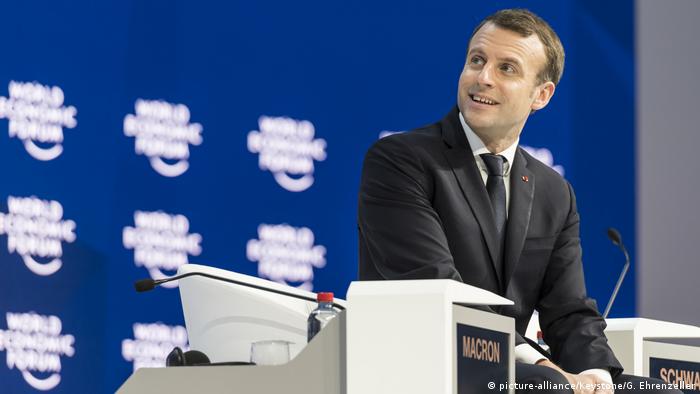 Addressing the World Economic Forum in Davos Wednesday, French President Emmanuel Macron shared his vision of a future Europe "finding its role in a globalized world and putting social cohesion above an often-observed obsession with growth."

He argued that neglecting social cohesion and with it large parts of the poorer populations in Europe would produce more and more opponents of globalization.

Macron said digitalization and technological progress in general were bound to change the labor market considerably, with low-skill jobs being reduced further.

He called on fellow European nations to invest a lot more in their domestic education systems to make sure that people kept abreast of new developments on the labor markets.

He said a number of political and economic reforms were required in the eurozone and beyond to make sure future challenges could be met successfully.

The president called for redesigning a 10-year strategy listing common objectives in the fields of the environment, energy, social cohesion and defense.

Macron doubted, though, whether quick progress could be achieved across the 28-member European Union.

This, he added, shouldn't keep a core group of EU nations from forging ahead in their reform drive.

'Nothing wrong with being ambitious'

Macron devoted a large part of his speech in Davos to France's own reform aspirations. He mentioned a huge program to strengthen research and development and foster innovation.

He said a lot was being done to reduce red tape, mentioning that for many decades France had been an overregulated country where entrepreneurs "were not allowed to fail, but not allowed to succeed either."

Macron emphasized that France was now at the forefront of countries fighting against climate change, saying that it would close all of its coal-fired power stations by 2021.