Opinion: Freedom of speech in Germany — be mainstream or be quiet 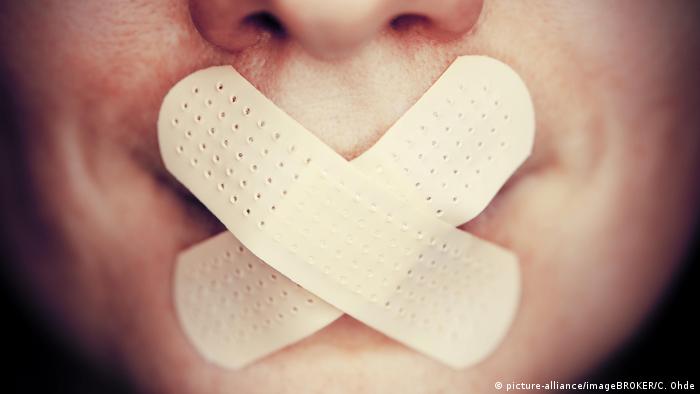 French Enlightenment thinker Voltaire is believed to have once said that "I disapprove of what you say, but I will defend to the death your right to say it." Those who recently interrupted lectures by the founder of the right-wing populist Alternative for Germany (AfD), Bernd Lucke, at Hamburg University should take heed. The phrase goes to the very heart of democracy, namely the principle of free speech. And in today's Germany, this principle is in more danger than some may think.

Granted, nobody will be put behind bars for expressing opinions at odds with the political mainstream. Formally, everyone in Germany is granted freedom of speech. But in reality, a person taking a non-mainstream view will quickly find him- or herself shunned by mainstream society.

Bernd Lucke's case is particularly extreme. After all, protesters don't take issue with the content conveyed by his lectures in economics, which had to be postponed twice and can only take place under police protection. What they object to is the mere fact that Lucke helped found the AfD — despite the fact that he left the party in 2015, precisely because he found it had shifted too far to the right.

In their opinion, Lucke should simply be barred from speaking in public — on any subject.

Germany's former Interior Minister Thomas de Maizière of the Christian Democratic Union (CDU) recently experienced something similar. He had planned to hold a lecture at the University of Göttingen, but had to call off the event due to protests by left-wing groups.

What is Germany coming to when we cannot even practice free speech at university?

The range of opinions deemed broadly acceptable in Germany is shrinking. According to several surveys, a majority of respondents say they feel they need to guard their tongue when it comes to certain subjects. Otherwise, they believe, their careers could be affected and colleagues, friends and neighbors may turn their backs on them.

Respondents said this applied especially to the issue of immigration. Anyone even vaguely critical of migrants being rescued at sea is instantly branded an inhumane monster.

This is despite the fact that everyone knows migrant ships are deliberately made sea-unworthy to necessitate rescue missions. And that this is part of a bigger, well organized trafficking operation from Africa to Europe.

Even German Interior Minister Horst Seehofer of the Christian Social Union (CSU) has fallen in line with the political mainstream – considering that Seehofer had always been a right-wing rebel within the CDU/CSU alliance, this is quite a turnaround.

We are censoring ourselves

There are similar unwritten, but omnipresent restrictions when it comes to talking about climate change. Anyone who so much as hints at the social dimension of radically changing our lifestyles to combat climate change is treated as a rogue who negates the crisis.

And any public figure who dares to openly admit to being a carnivore, indulging in long-distance air travel or driving an SUV immediately loses all respect. It is truly paradoxical. Radical climate activists like Roger Hallam of the Extinction Rebellion movement and the captain of rescue vessel Sea-Watch 3, Carola Rackete, have publicly questioned the merit of representative democracy — and were not shunned.

While there isn't an explicit list of taboo opinions, pretty much everyone feels there are things which we may and may not say in public. Most people, therefore, stick to what the present zeitgeist deems acceptable. But this is self-censorship. And democracy crucially depends on debate and a plurality of opinions.

If people are too scared to voice dissenting opinions, society becomes lethargic — and robs itself of one of the most important democratic rights we know: The freedom to express unpopular opinions.