The majority of Germans believe children should not be allowed to skip school to protest the climate crisis, according to a new poll. However, they do believe the government should work to protect the environment. 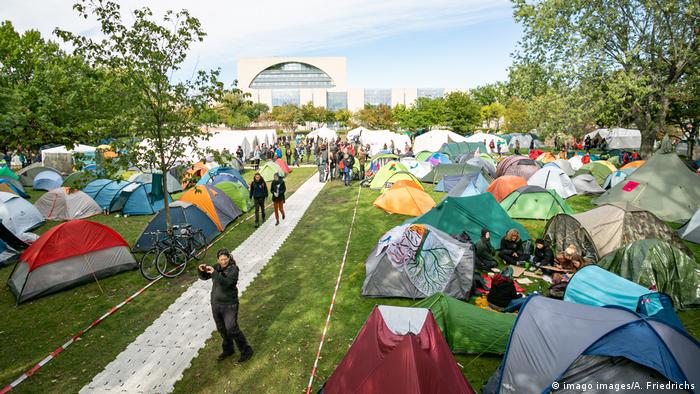 The majority of Germans do not support children skipping school to participate in Fridays for Future or similar protests against catastrophic climate change, the latest Deutschlandtrend report by political research firm Infratest Dimap indicated on Thursday.

A week after Extinction Rebellion (XR) demonstrators camped out in front of government buildings in Berlin and took part in a worldwide day of protest calling on countries and companies to do more to protect the environment, 63% of Germans said it was not justifiable to let children miss a day of school to demonstrate.

An even higher proportion — 76% — were against disruption to traffic and industry.

However, most voters do want the German government itself to do more about climate change. When asked about the new climate package agreed to by Chancellor Angela Merkel's cabinet, which has been criticized for being too tepid, voters of every party except the far-right Alternative for Germany (AfD) said that it was either adequate or did not go far enough.

Some 83% of Green party voters said that the legislation, which will introduce a minimal carbon tax, higher taxes for air travel, and a small subsidy for the purchase of electronic cars, was not enough to tackle climate change, which is already having massive effects on German weather and agriculture. Fifty-five percent of center-left Social Democrat voters also agreed that it didn't go far enough, as did 35% of those who support Merkel's conservative Christian Democrats.

In a country where many people rely on train travel, the new measure to lower long-distance train ticket prices was met with overwhelming support, with a whopping 92% in favor. Higher taxes for flying, scrapping a premium for old oil heaters, and a higher tax for those who commute by car were all seen favorably by the majority, but a special government rebate for buying an electric car was not, with only 43% support.

Germans appeared to believe that protecting the environment was more important than the effects climate protection would have on their everyday lives. Fifty-seven percent of respondents agreed that the government had the right to forbid citizens and companies from doing things that pollute and promote climate change, and only 38% said they were worried about how those regulations might "restrict" their lives.

The survey also showed that most Germans are in favor of a suggestion by Interior Minister Horst Seehofer to help countries such as Italy, Spain and Greece more directly by taking in a specific percentage of refugees rescued in the Mediterranean Sea. Some 58% of participants said they supported the idea, and the majority of supporters of every major political party except the AfD said it was a good plan.

This plan has also seemingly increased Seehofer's popularity, which has slowly bounced back since he nearly pushed Merkel's government to the brink of collapse over his desire for a more hard-line immigration policy than the chancellor wanted.

Seehofer's personal popularity increased more than any other politician's over the past month, the survey found, having gained nine points to reached 39% approval.

Germany to join alliance to phase out coal

In the wake of the global student climate strike, Environment Minister Svenja Schulze said Germany would move further in its efforts to phase out coal. Berlin is hoping to shut down all its coal-powered plants by 2038. (22.09.2019)