′Extinction Rebellion′ ups the ante in protests against climate change | Germany | News and in-depth reporting from Berlin and beyond | DW | 07.10.2019

The activist group organized global sit-ins and boycotts on Monday to force radical action on climate change. DW attended one demonstration in Berlin to learn the group's motivations.

The international environmentalist movement Extinction Rebellion is famed for its so-called "die-ins," in which hundreds of people swarm public squares only to collapse to the ground, symbolizing the death humanity faces if politicians don't act against climate change.

Early Monday morning, bodies lay left and right in the street circling Berlin's iconic Victory Column, but for a different reason altogether. Many of the hundreds of activists now occupying the space surrounding the monument had been here since the wee hours of the morning and were now trying to catch up on some sleep.

They're going to need it: Extinction Rebellion is planning to occupy the busy intersection until the cops kick them out — whether that takes hours, days or the entire week. From London to Cape Town, environmental activists around the world are upping the ante this week with boycotts and sit-ins to force political action on climate change.

"We're showing that it's not just about schoolchildren [taking to the streets]," Jojo, 29, a climate activist who ditched work to attend today's rally in Berlin, told DW. "Policymakers have to take note: They're radicalizing people by doing the opposite of what we're demanding."

In Germany, the coalition government thought it had responded adequately to public anger about climate change inaction with a slate of laws announced last month.

The $60-billion (€55-billion) package of climate policy initiatives introduces a pricing scheme for carbon emissions by 2021 in pollution-heavy sectors like transportation and housing. These prices would get more expensive over time. Meanwhile, the government committed itself to carbon neutrality by 2050 and new subsidies for renewable energy and e-mobility.

Scientists and environmental activists turned up their noses at the proposals, even as the Fridays for Future school strikes that have caught fire in Germany like nowhere else continued to draw thousands of truant schoolchildren to the streets.

But instead of strengthening the proposal in lines with protesters' demands, the government weakened it, according to a report from Spiegel Online published Sunday night. Among other concessions, the bill, to be adopted by the German Cabinet on Wednesday, waters down the promise of climate neutrality by 2050.

"What was there to actually water down?" asks Jojo. "These demonstrations obviously aren't cutting it. And we don't have time to wait until they do." 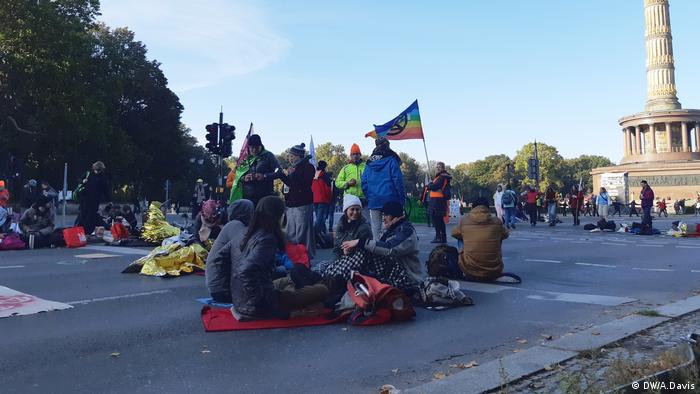 Showing the situation at all costs

Enter Extinction Rebellion, an environmental movement that began in the United Kingdom last year and has since spread across the world. It demands that governments elevate climate change to the status of a national emergency and table all other legislation that won't help fix the problem. Above all else, they demand that global emissions sink to zero by 2025.

And unlike Fridays for Future and its teenage figurehead, Swedish activist Greta Thunberg, Extinction Rebellion has attracted an older demographic willing to take more legal risks to get their message across.

"We rely on the means of civil disobedience, so no violence, but roadblocks and camping out on government property are legitimate means of protest for us," Dr. Claire Wordley, a professor at Cambridge University and one of Extinction Rebellion's leading activists, told DW.

"We want to show how drastic the situation is," she added. "We're currently in an ecological crisis."

That desire is taking many forms today in Berlin. Here at the Victory Column, experienced activists hold teach-ins for newbie protesters on how to stand up to police without getting hurt.

On the yard in front of the famous golden monument, an ark is erected to symbolize the looming mass extinctions scientists predict are becoming unavoidable. In the background, someone plays the 80s classic "The Final Countdown" on a kazoo.

Activists have promised to disperse throughout the city should police break up the sit-in, but other demonstrations have already taken root. In addition to the over 500 people surrounding the Victory Column on Monday, local media have reported that an estimated 1,000 Extinction Rebellion activists are currently camped out on the lawn of the German Chancellery. 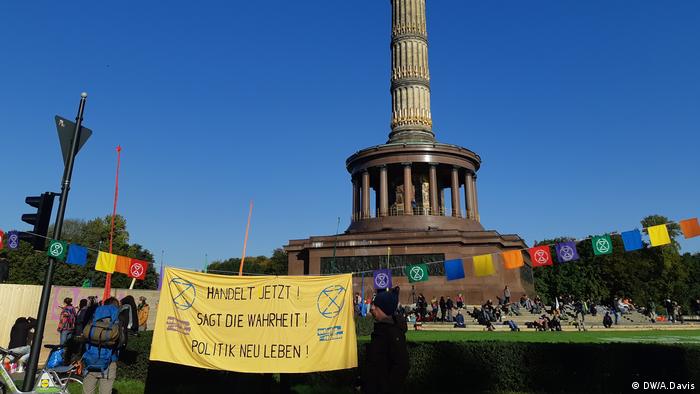 Its current tenant, Chancellor Angela Merkel, once known as the "climate chancellor," promised attendants of an event yesterday in the southern German town of Sinsheim that observance of Germany's climate goals will be anchored in the coming climate change package.

But such promises violate one of the core tenets of Extinction Rebellion, says Adriene, 37, a protester at Berlin's Victory Column.

"It's a sham through and through, and our central demand is: Tell the truth," he says, summoning a bit of energy while he speaks. He's also been here since 3 a.m. to help set up the blockade.

"What we see as a catastrophe isn't being discussed in such terms at all," he added. It's why he's prepared to stay put at Berlin's Victory Column at all costs: "Climate change isn't something that's rolling down on us in 100 years — we're in the thick of it."

Citizens' Assemblies: Time for the people to take control of the climate crisis?

Extinction Rebellion is demanding politicians step aside and let the people decide on climate action. Could citizens' assemblies be a democratic tool fit for the scale of the crisis? (07.10.2019)