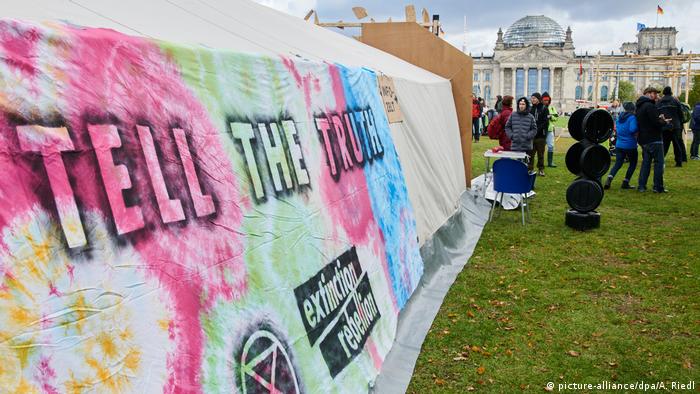 Its protests, which will urge the government to adopt climate policies that will bring the country's CO2 emissions down to zero by 2025, are due to start on Monday and run for a week.

A spokeswoman for the group said it wanted to offer workshops and run working groups at the camp starting on Sunday. Police said 6,000 people had registered for the protests. 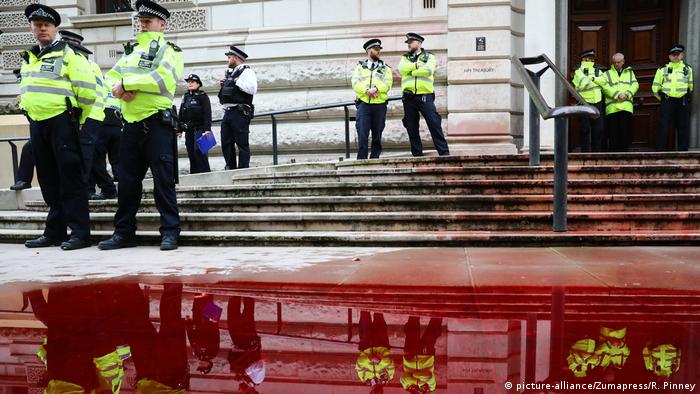 In London, Extinction Rebellion activists sprayed fake blood at the Treasury in Westminster

The Berlin activists plan to follow the example set by the movement in London and elsewhere earlier this year by blocking major roadways, starting with the public square and traffic intersection of Potsdam Square.

"We are recommending that drivers leave their cars at home," the group said on Friday.

Read more: The activists risking prison to save the planet

According to a spokeswoman, recent climate proposals by the government are "entirely insufficient." The package of measures agreed on September 20 is also felt to be inadequate by 53% of the German public, according to a survey by broadcaster ZDF.

Germany is currently on track to miss its 2020 emissions reduction target by almost 25%.

Meanwhile, in Paris, hundreds of XR activists barricaded themselves in a shopping center on Saturday for 17 hours. The protesters unfurled banners that read  "Burn capitalism not petrol" in the Italie 2 mall in the southeast of the French capital as security services attempted to remove them.

"We resisted. We created a human chain, we were all tied up and seated, not violent, and the police gassed us," 20-year-old activist Benjamin told AFP.

At around four o'clock in the morning, the activists decided to leave the premises.

In Paris, XR operations are planned for almost everyday until October 12 on the themes of plastic waste, ocean protection, and forced migration linked to climate change.

First founded in Britain, Extinction Rebellion now has branches in some 50 countries. It plans to launch two weeks of protests in 60 cities across the world from Monday.

As Extinction Rebellion activists prepare for blockades in cities worldwide on Monday, many artists have signed their call to action to the German government. (04.10.2019)