Extinction Rebellion: How far can the protests go? | World | Breaking news and perspectives from around the globe | DW | 06.10.2019

Traffic blockades, "die-ins," naked protests in parliament: Inspired by the non-violence of Gandhi and Rosa Parks, Extinction Rebellion is using unconventional tactics to call for immediate action on the climate crisis. 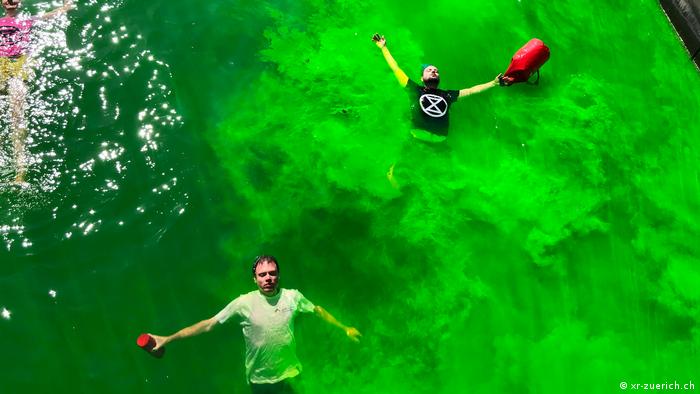 On Monday, Berlin and dozens of cities around the world are set to experience what London did in April: There, "Extinction Rebellion" activists paralyzed traffic, forced the suspension of 55 bus lines, and led police to arrest more than 700 demonstrators in a massive 10-day display of civil disobedience.

Organizers in Berlin plan to dock the pink ship Arche Rebella on the Spree River on Monday to kick off at least a week of protests. At Postdamer Platz, a major public plaza, organizers say they will present residents with the concept of a "car-free city," complete with workshops and performances.

For days the group has been training members on how best to engage in acts of civil disobedience. Extinction Rebellion is now one year old, and since its founding the group has used a number of unusual interventions to alert the world to the deadly consequences of climate change. Founded in the United Kingdom (UK) in 2018, Extinction Rebellion has quickly grown to become an international movement, and says it has branches in some 70 countries around the world.

Just a few weeks ago, the group shocked residents in the Swiss city of Zurich by coloring the local Limmat River acrid green. A number of activists also floated in the river pretending to be dead — the group had dumped the harmless, organic coloring agent Fluorescein into the river to underscore one of their "die-ins."

Read more: Humans to wipe out two-thirds of wildlife by 2020 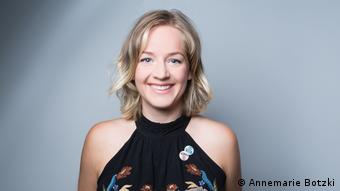 Intentionally going over the line

"We have seen that years of demonstrations and online petitions haven't changed anything," says Annemarie Botzki from Extinction Rebellion Germany. "That's why many of us have decided to go a step further and practice civil disobedience, blocking city streets in order to draw attention to the ongoing climate catastrophe."

The group's activities are not always without risk, and above all, many are not entirely legal. Extinction Rebellion has decided that sometimes it is important to step over the line to get its point across. There is only one thing the group categorically rejects: Violence. "Using non-violent strategy and tactics as the most effective way to bring about change" is one of the group's 10 principles.

Read more: The chilling reality of a warming world

"Non-violent protest projects a sense of innocence, even though one is breaking the law. It is also a way to expose the state or police if they react harshly," says Tobias Eule, a professor of legal sociology in Bern, Switzerland, and at the Hamburg Institute for Social Research. "It's really a classic strategy for initiating certain discussions."

The narrative of a violent state that harms its citizens also lines up with Extinction Rebellion's three demands: It is calling on national governments to clearly articulate the threat of climate change; to initiate policies that will lead to net-zero emissions by 2025; and to allow a citizens' assembly to make decisions on climate and ecological justice issues. The group has published no other concrete political demands thus far.

Extinction Rebellion consciously invokes protest pioneers such as Mahatma Gandhi and Rosa Parks as its role models: "The American civil rights movement started like this," as Tobias Eule tells DW. In the fight against discriminatory Jim Crow laws, organizations were even founded to pay for the court costs of those arrested during protests.

Members of Extinction Rebellion forego the protection of anonymity and many are prepared to be arrested during their interventions. Activist Botzki says it is impossible to know just what percentage of protesters are willing to go that far: "A mother with two kids at home cannot get herself arrested. We are well aware that it isn't something everyone can afford to do." 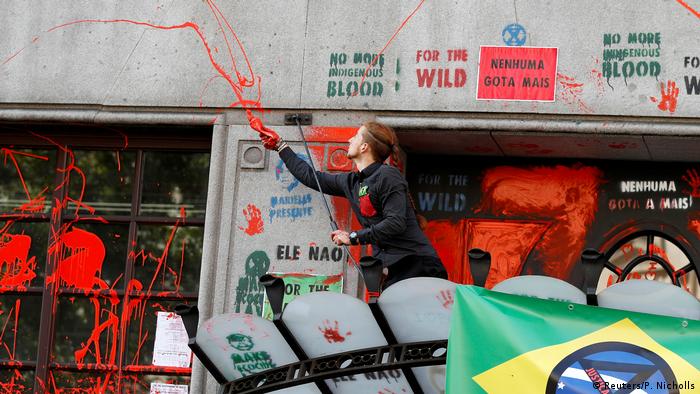 In August, Extinction Rebellion demonstrators threw blood-red paint and slogans on the Brazilian Embassy in London in protest at the government's treatment of indigenous people and the Amazon rainforest

So what is acceptable to Extinction Rebellion and what crosses the line? Botzki says that is not always a question that is easy to answer. She says the group seeks to annoy as few people as possible. Therefore members avoid harassing or disturbing individuals, as well as trying to ensure that actions cannot be misinterpreted as being violent.

Roger Hallam, the initiator of the "Heathrow Pause" campaign, in which drones were illegally flown in the London airport's restricted zone –—an initiative that was in no way linked to Extinction Rebellion — is a doctoral student at London's Kings College. There he researches civil disobedience, and has also studied protests and Extinction Rebellion's aims.

Hallam says that if 3.5% of the population would support the movement, its chances of success would go up significantly. Tobias Eule says the number appears quite high and supposes it may well be intended to motivate those already in the group: "As a rule, protest movements tend to be successful when they can set down strategically important public markers and then force legal changes through the courts, administrators, or the legislature." 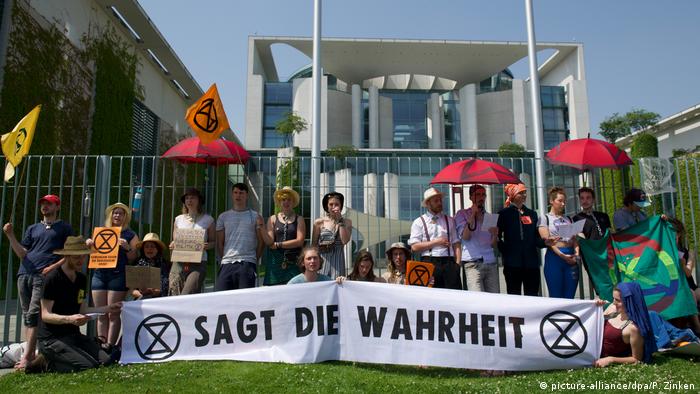 "Tell the Truth": A central demand of protesters is for governments to admit the scale of the climate crisis

Everyone is fighting together

Extinction Rebellion has been roundly criticized for activities that go beyond the bounds of legality, though it is impossible to say whether such criticism is aimed at the group or its goals. Those participating in "Fridays for Future” rallies are also heavily criticized for skipping school, says Tobias Eule: "These days, when public outrage is so easily excited, it doesn't take much to create a backlash."

Despite having very different approaches, climate protection organizations are, nevertheless, in agreement as to their basic aims: Dozens of groups, for instance — from establishment heavyweight Greenpeace, to newcomer Extinction Rebellion — all called on citizens to join the global climate strike on September 20, 2019. That strike brought millions of protesters onto the streets around the world, and the next installment is already set to take place on November 29.